We must never get used to this | Global News

We must never get used to this 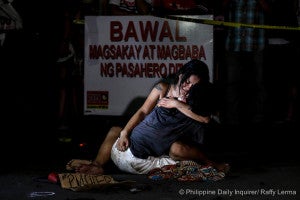 Presidente Duterte already plans to honor a dictator. Last week, he declared he wouldn’t mind being remembered like one.

“I will retire with the reputation of Idi Amin,” he said at the San Beda College of Law. “My paradigm is not like here in Manila … In Mindanao, people resort to killings. Why will I change what I know? It is serving the country well.”

The outrageous statement caused hardly a ripple even though Duterte essentially endorsed a thug who was a hundred times worse that the tyrant he plans to bury at the Libingan ng Mga Bayani.

Ferdinand Marcos, one of the most corrupt rulers in history, murdered 3,000 people. Idi Amin slaughtered 300,000, earning him the nickname “Butcher of Uganda.”

Now this column isn’t about Idi Amin or even Marcos. It’s about how we’ve learned to tolerate the ugliness around us.

A president compares himself to a bloodthirsty demagogue and the reaction was an unimpressed “meh.”

Yet another photo of an alleged drug dealer or user gunned down execution- style in Manila becomes just one of hundreds of tragic, gory images from a savage campaign.

Many of us saw that powerful photo of the woman in the middle of a street holding her dead husband’s body with the sign “I’m a pusher” next to him. I must confess it was only after it kept appearing on my Facebook feed that I bothered to read about what happened. Like many of you, I’ve just seen so many such images these past few weeks.

A month into the age of Duterte, we’ve just gotten so used to bloodshed.

In a pastoral letter, Jose Mari Jimenez, president of De La Salle Philippines, denounced the killing spree and the way the nation has responded to the carnage: “What troubles me even more as an educator is the absence of a significant public outcry against the blatant contempt for the human life and the rule of law that these extrajudicial killings represent.”

“It is a mistake to believe that we can create a peaceful society by denying those suspected of wrongdoing their fundamental rights to life and to due legal process.”

And there’s clearly a big problem on this issue: a dangerous twisted understanding of due process and the fundamental rights of citizens.

Filipinos cheering or at least tolerating the wave of violence appear to hold two key beliefs.

They believe every person who’s been gunned down in cold blood is guilty. Surely only the bad guys are getting killed, right? Why bother with trials and all that legal stuff?

They also believe those who speak out against the campaign must be in cahoots with the bad guys.

This became clearer to me last week with my column on how other nations have realized the futility of an all-out war strategy against illegal drugs.

Nearly a thousand comments have been posted, including one accusing me of being an addict and my friend, the activist-lawyer Raffy Aquino, who denounced how Duterte has trivialized the legal process, of working for drug cartels.

Raffy and I made light of the comment, cracking jokes about the bizarre accusations.

But then it occurred to me: that’s wrong. It underscores how we’ve become so willing to accept the flawed and dangerously narrow-minded views of many of Duterte’s cheerleaders and to let them express these without being challenged publicly.

Raffy Aquino himself posted a response on his Facebook page, rejecting the inane accusation that was totally ignorant of his distinguished record as a human rights lawyer. He also affirmed his belief in the law and the legal process.

“I consider human rights and due process as among the coolest inventions of human civilization,” he writes. “I also expect the presidents of my country to at least suffer them.”

He continues: “As to drug cartels, my only connection to them is my regular trips to Mercury and Watsons to restock on my Pritor 40 mg. that I imbibe every 11 p.m. for the hypertension the ills of society and the pleasures of the table have caused me, and Benadryl in view of a lingering allergic sensitivity to shrimp. Not a warm feeling at all, that I should feel compelled to post this. And for this new found insecurity, I blame this government.”

And I blame this government too. And I join Raffy Aquino, De La Salle University and others in saying: We can’t just let this happen. We must never get used to this.