No Asean consensus on South China Sea row for now 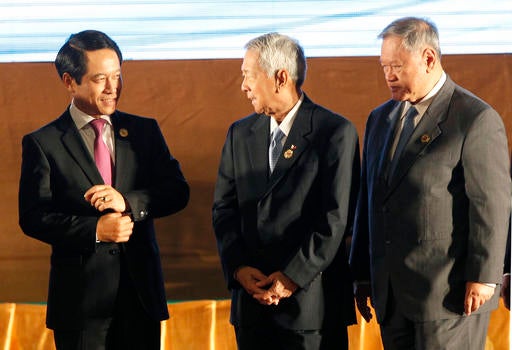 VIENTIANE, Laos — Southeast Asia’s main grouping failed to reach a consensus on how to deal with China’s territorial expansion in the South China Sea, intensifying a diplomatic stalemate that officials said they hope to resolve in further closed-door parleys on Sunday.

The foreign ministers of the 10 countries that make up the Association of Southeast Asian Nations deliberated for about three hours, continuing the unfruitful discussions their senior officials had on Saturday, but with no result.

“They haven’t completed their discussion,” said Thai Foreign Ministry spokesman Sek Wannamethee. “They are now having a working luncheon followed by an Asean retreat, so the issue will be discussed during the retreat.”

Like all other Asean meetings, the foreign ministers’ conclave also traditionally ends with a joint statement. But the sticking point is whether to include a reference to the South China Sea. Asean’s cardinal principle is decisions by consensus, which means any country can veto a proposal. This time, it is Cambodia, China’s close ally. In 2012, Cambodia also blocked a reference to the dispute, which ended with the ministers failing to issue a statement for the first time in the bloc’s history.

Sek said the “joint communique is still being drafted.”

In welcoming remarks earlier, Laotian Foreign Minister Saleumxay Kommasith made no mention of the dispute.

“Despite conflicts and challenges that have occurred in different parts of the world in general, peace, stability and development cooperation among nations remain the prevailing trend in this era,” Kommasith said.

The Sunday talks are expected to deal with terrorism, economy, climate change, security, the impact of Brexit and other issues. But all this has been overshadowed by the July 12 decision by The Hague-based tribunal in a dispute between China and the Philippines.

The Permanent Court of Arbitration found that China had no basis for its expansive claims to territorial waters around the Philippines. China has similar claims against other Asean nations, including Vietnam and Malaysia, and the ruling should have emboldened Asean to challenge Beijing more forcibly.

That’s being prevented by Cambodia, said diplomats speaking on condition of anonymity because they were not authorized to discuss the matter with the media. They said the draft statement to be issued by the ministers on Tuesday left blank spaces under the heading “South China Sea” until a consensus can be reached.

Laos, which also is a China ally, has trod carefully and not taken sides because of its position as the host.

A diplomat who attended closed door meetings told The Associated Press: “Cambodia is the villain deja vu 2012. It’s really a loyalist of the big country C,” the diplomat said, referring to China.

Another diplomat said that the United States also did not push China during Saturday’s discussions, leaving Asean countries with little firepower. The U.S. was more keen on getting the region’s support on chastising North Korea, and ignored the South China Sea during the discussions, said the diplomat.

U.S. and Chinese officials were meeting Asean ministers as part of broader talks.

Tran Viet Thai, deputy director of the Institute of Strategic Studies, a Vietnamese government think tank, described the arbitration tribunal’s ruling as very important because, theoretically at least, it should help resolve disputes, uphold the law and clarify the stance of the parties. “But at this point, it is not a magic stick … it’s not a solution to everything, but rather it needs to be combined with other measures.”

The South China Sea is dotted with reefs and rocky outcroppings that several governments claim, including China and the Philippines. The arbitration panel didn’t take a position on who owns the disputed territories. It did conclude that many of them are legally rocks, even if they’ve been built into islands, and therefore do not include the international rights to develop the surrounding waters. That and other findings invalidated much of what China’s called its historic claims to the resource-rich sea.

In order to ease tensions, China, the Philippines and possibly other claimants must define what the ruling means for fishing, offshore oil and gas exploration, and military and other activities in the vast body of water that lies between the southern Chinese coast and the Philippine archipelago.

China has rejected the ruling as bogus, and called for bilateral negotiations with the Philippines. In recent days, its military has staged live-firing exercises in the area and said it would begin regular aerial patrols over the sea. It also has asserted that it will not be deterred from continuing construction of its man-made islands.

The Philippines also remains in a tight spot despite the legal and moral victory it gained through the tribunal’s decision. It simply cannot afford to antagonize China, especially since the country’s new president, Rodrigo Duterte, has made friendly overtures to Beijing to repair relations that were strained under his predecessor, Benigno Aquino III./rga