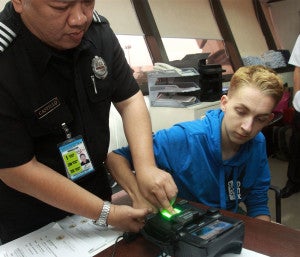 An immigration personnel at the Ninoy Aquino International Airport processes a foreign national who has been barred from the Philippines for violating the conditions of his stay. (AFP file photo)

MANILA — The Bureau of Immigration has revamped its immigration head supervisors at the Ninoy Aquino International Airport to put an end to familiarization and corruption in its frontline units.

Most immigration officers at the BI main office in Intramuros will be reassigned to the airports as a first step in the reshuffle of immigration personnel, according to the BI.

BI Commissioner Jaime Morente said the reassignment would be in line with implementing President Duterte’s marching orders to eradicate familiarization in the agency’s operating units.

“The revamp is aimed at preventing fraternization among employees, which was pinpointed as a major source of corruption in government agencies,” the immigration chief said on Friday.

The revamp will affect about two-thirds of immigration personnel stationed at the NAIA’s three terminals.

Morente stressed that the reorganization of immigration agents stationed at the airports would be the first in a series of personnel reassignments upon his assumption last July 1.

“In the next days, we will be issuing new orders reassigning to the airports the immigration officers currently stationed at the main office for faster and more efficient service,” he said.

BI spokesperson Tonette Mangrobang said the agency would beef up its campaign against illegal aliens as part of the President’s order to law enforcers to crack down on illegal drug syndicates usually run by foreign criminals.

“The restructuring and streamlining of the BI’s intelligence and enforcement units was prioritized to serve notice to illegal aliens and foreign criminals that their days are numbered,” she added.

Mangrobang said the FSU reverted to its former status as a unit under the intelligence division.  SFM