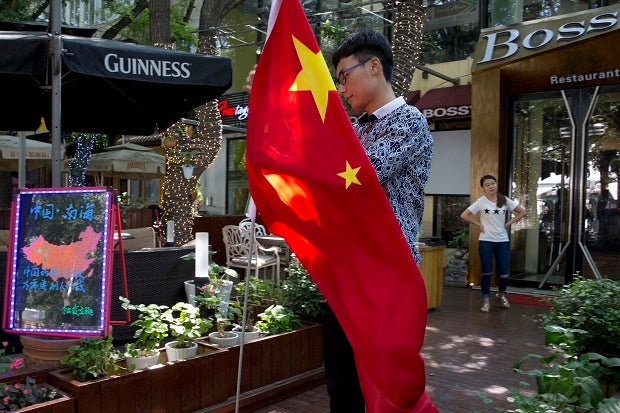 A worker of a restaurant bar prepares to hoist a Chinese national flag near a drawing of the country with the words “China, South China Sea, China’s territory right does not need arbitration” in Beijing, Wednesday, July 13, 2016. China warned other countries Wednesday against threatening its security in the South China Sea after an international tribunal handed the Philippines a victory by saying Beijing had no legal basis for its expansive claims there. AP

BEIJING — The US Navy’s top admiral is making a three-day visit to China and meeting with his Chinese counterpart at a time when Beijing has rejected an international tribunal’s ruling that invalidated its expansive claims in the South China Sea.

Adm. John Richardson, chief of naval operations, will meet the commander of the People’s Liberation Army’s Navy, Adm. Wu Shengli, during his trip to the Chinese capital of Beijing and the port city of Qingdao starting Sunday.

Richardson is scheduled to visit the Chinese navy’s headquarters in Beijing and meet with other senior defense officials. He will visit the navy’s submarine academy and tour the aircraft carrier, Liaoning, when he is in its home port of Qingdao.

They will discuss the South China Sea, ongoing Rim of the Pacific, or RIMPAC, military drills, and ways to boost interactions between the two militaries.

Vice Foreign Minister Liu Zhenmin said Wednesday that Beijing could declare an air defense identification zone over the waters if it felt threatened.

China’s island development in the South China Sea has inflamed regional tensions, including with nations that have competing claims to the land formations. Most fear that Beijing, which has built airfields and placed weapons systems on the man-made islands, will use the construction to extend its military reach and perhaps try to restrict navigation.

Several times in the past year, US warships have deliberately sailed close to one of those islands to exercise freedom of navigation and challenge the claims. In response, China has deployed fighter jets and ships to track and warn off the American ships, and accused the US of provocative action./rga