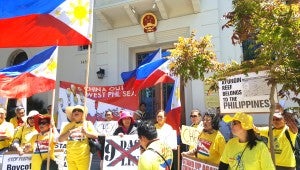 Protesters at an entrance of the Chinese consulate chanted, delivered speeches and sang “Bayan Ko” and the Philippines’ national anthem. PHOTOS BY JUN NUCUM

SAN FRANCISCO — Scores of San Francisco Bay Area Filipinos trooped to the People’s Republic of China’s consulate in what was billed a combined victory, indignation and eviction notice rally after an arbitral tribunal solidly rejected China’s claim to the West Philippine Sea.

Wearing anti-China protest shirts, the rallyists initially converged at the nearby St. Mary’s Cathedral to say a thanksgiving prayer before proceeding to the consulate chanting, “China out now!,” with some Filipino World War II veterans leading the pack.

Outside the Chinese consulate, protesters chanted and hailed the decision of the Permanent Court of Arbitration in The Hague. 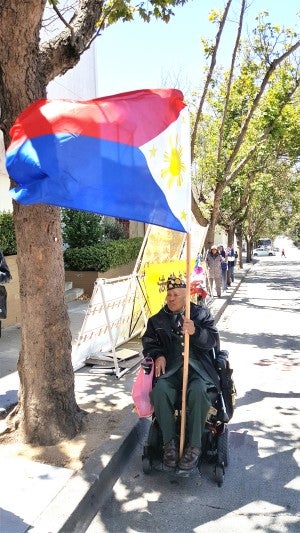 Wheelchair-bound veteran carries an inverted Philippine flag to denote his resistance to China’s encroachment in the West Philippine Sea.

In a text message, an ecstatic Philippine Consul-General to San Francisco Henry Bensurto, Jr. who also heads up the Department of Foreign Affairs (DFA) legal team to the Tribunal, conveyed:

“In all humility, we are grateful to the Tribunal judges and the Permanent Court of Arbitration).  God is good! Complete and total victory for the Philippines on all significant points including the 9-dash claim of China for historic rights, and that none of the features are capable of projecting 200-mile exclusive economic zone (EEZ). God bless the Filipino Nation and all Filipinos — past, present and future generations, in the archipelago and beyond.  It is a victory for the rule of law.  We hope that the relevant Parties will respect the outcome of the arbitration.  It protects the strong as it does to the weak.” 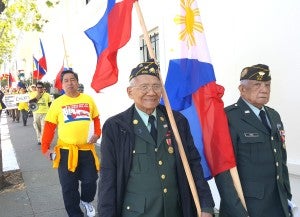 Veterans carry the Philippine flag while leading the march to the Chinese consulate. Rally leader Rodel Rodis keeps pace with them.

Rally organizer Rodel Rodis cheerfully stated: “I was so heartened to see that the International Tribunal Permanent Court of Arbitration in The Hague rendered a decision that is solidly in favor of the Philippine claim. We were concerned that it would be a very mixed decision that would not be as unequivocal as we would want it to be.”

Rodis explained the importance of the much-awaited decision and its impact on Filipinos: “All the arguments that China raised about having historic rights to the Scarborough Shoal and all those islets and shoals in the South China Sea turned out to be fiction. What China did not understand what the court said was that when China in 1982 signed the United Nations Convention on the Law of the Sea (UNCLOS), it recognized that countries have a 200-mile exclusive economic zone (EEZ).”

Rodis stated that what needs to be done next is to put pressure on the Duterte government to accept (the decision), “to defend the Philippines, our fishermen, and not allow China to continue its control of the Scarborough Shoal.” He added that there should be no backtracking on the issue by the new administration as “92 percent of the Filipino people have expressed support for President Aquino’s defense of the West Philippine Sea.” 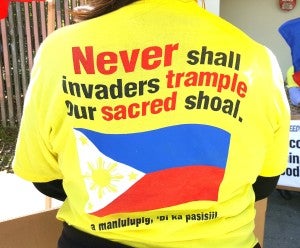 The print on this man’s shirt has one of rallyists’ messages.

China thinks that it can bribe the Philippines (and the) Duterte administration by offering to build a railway system in Mindanao, Rodis charged. “So we have to be very clear when we say no, the Philippines is not for sale. You cannot buy our patrimony. You cannot buy our natural resources. It is unconstitutional for any government to negotiate the sale or transfer of any of our natural resources,” he stressed.

Protesters picket the Chinese consulate’s entrance for visitors, letting passers-by know what they are staging a protest against China’s sea-grab.

In an interview, Rodis admitted that world support is needed in enforcing the decision now that the Philippines has a legal basis for ownership of the 200-mile EEZ. He reiterated the call to boycott China-maide goods..

Rallyist Charito Benipayo likened the Philippines’ struggle against China to that of David against the giant Goliath. “Of course, we are David to China’s Goliath, with their might. That is why I am also emotionally affected because all of us Filipinos no matter where we are, our hearts are in the Philippines. We love the Philippines that is why all Filipinos all over the world have to unite.”

Filipino WWII veterans were present to celebrate the Tribunal’s decision with fellow Filipinos.

“We, the veterans, are happy together with other Filipinos here in San Francisco on the favorable decision in the South China sea issue,” Leonardo Torres.

Bernardo Isorena wanted to be sure: “Has the decision come down? Did we really win?” 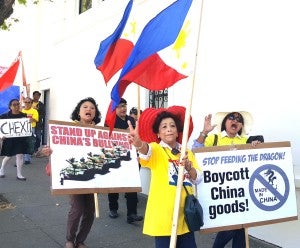 Charito Benipayo (center with victory sign) marches with other protesters on the way to the Chinese consulate in San Francisco.

Staunch veterans’ advocate Rudy Asercion added that he and the veterans were at the rally to urge China to abide by ruling of the Tribunal.

“If China does not abide by that ruling, that means that the Americans will keep sending the warships and the Chinese will keep building their islands, and this will result in an armed conflict because territorial rights are seldom settled by negotiations and we will caught in the middle of it all,” Asercion expounded.

“There has to be an adult in the room,” he continued. “And we are hoping that this ruling by The Hague Tribunal will at least give the semblance that there is adult process in the South China Sea. The tribunal issued the decision that is the rule of law that the countries should abide by.”