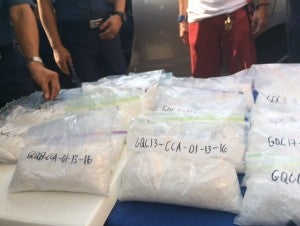 RADJAH BUAYAN, Maguindanao – The arrest here last Saturday of four suspected drug lords has led police to clues on a transnational crime ring believed to be involved in the manufacture and supply of shabu (methamphetamine hydrochloride) in Mindanao, Mayor Zamzamin Ampatuan said.
Ampatuan, the lone party mate of President Rodrigo Duterte in Maguindanao, said the indications could be gleaned from pieces of evidence seized from the suspects, considered to be “big-time” drug dealers. These included bank cash deposits slips made for receivers with Chinese names.

But Ampatuan would not elaborate on what names were written on the deposit slips or the date and the amount of each transaction.

The police initially reported that the arrested suspects were “big fishes” in the local trade of dangerous drugs, but their names were hardly familiar in Maguindanao communities and public offices.

However, their relatives, who did not want to be identified to avoid being implicated, said Makalimpas was a farm tractor driver, and Abraham Balayan, a farmer, while Nok was a driver.

“Seized from them were high-powered firearms and shabu in small packets when they were intercepted on a white Ford Ranger, apparently from prior deliveries to other areas,” Ampatuan said.

A check with the Maguindanao Provincial Prosecutors Office showed that all four were accounted for and were being held under police custody. They also went through immediate inquest proceedings at the Regional Trial Court in Cotabato City.

In Datu Paglas, Maguindanao, another well-armed self-confessed drug dealer showed up at a military base and voluntarily yielded on Wednesday.

Abdulatip Pendaliday said he had thought about giving up, especially with the daily TV news reports of drug suspects getting killed.

Pendaliday used to be a banana plantation worker in Datu Paglas and is also a resident of the town, according to Capt. Mark Soria of the 33rd Infantry Battalion.

In Pandag, also in Maguindanao, 183 users and 14 pushers took their oath before local officials and vowed to avoid illegal drugs.

Across Maguindanao, police have listed 6,226 illegal drug personalities, who volunteered to drop the bad habit, including those from Pandag.

Maguindanao now has the highest number of suspected drug users and pushers who have surrendered from the five provinces of the Autonomous Region in Muslim Mindanao (ARMM).

Maguindanao Gov. Esmael Toto Mangudadatu, in a radio interview, said it might  take some time to put up a rehabilitation center for drug dependents in the province.

In the meantime, he said, those who gave up and were sincere in kicking off the habit may avail of the provincial government’s physical fitness, regular counseling and livelihood training programs.

In Ozamiz City, 11 self-confessed drug dealers joined more than 2,000 drug users and small-time pushers in surrendering to authorities on Tuesday.

The surrender was considered among the largest in Northern Mindanao.

The surrender came after Mayor Reynaldo Parojinog Sr., who himself has been accused of involvement in the drug trade, went around the city and urged drug dealers and users to yield.

Parojinog had denied any involvement in the drug trade, saying he himself has been advocating for the eradication of the narcotics trade.

“Drugs confiscated from other [areas near here] are linked to Ozamiz by my detractors so they can easily link it to me,” he said in an interview.

Parojinog said he has been very vocal against the proliferation of shabu in his city since becoming mayor in 2001.

He said he wanted to clear the city of illegal drugs and erase the stigma attached to it as the shabu capital of Northern Mindanao.

In Kauswagan, Lanao del Norte, Col. Marsis Gayat, the commander of the Army’s 5th Infantry Battalion, said he had sternly warned soldiers and militias against involvement in drugs

Gayat admitted that some militiamen had confessed that they occasionally used shabu.

He warned them to stop or they would be dismissed from service. (With reports from Jigger Jerusalem and Richel Umel, Inquirer Mindanao)  SFM/rga