‘Tribunal ruling could pave way for code of conduct in S. China Sea’ 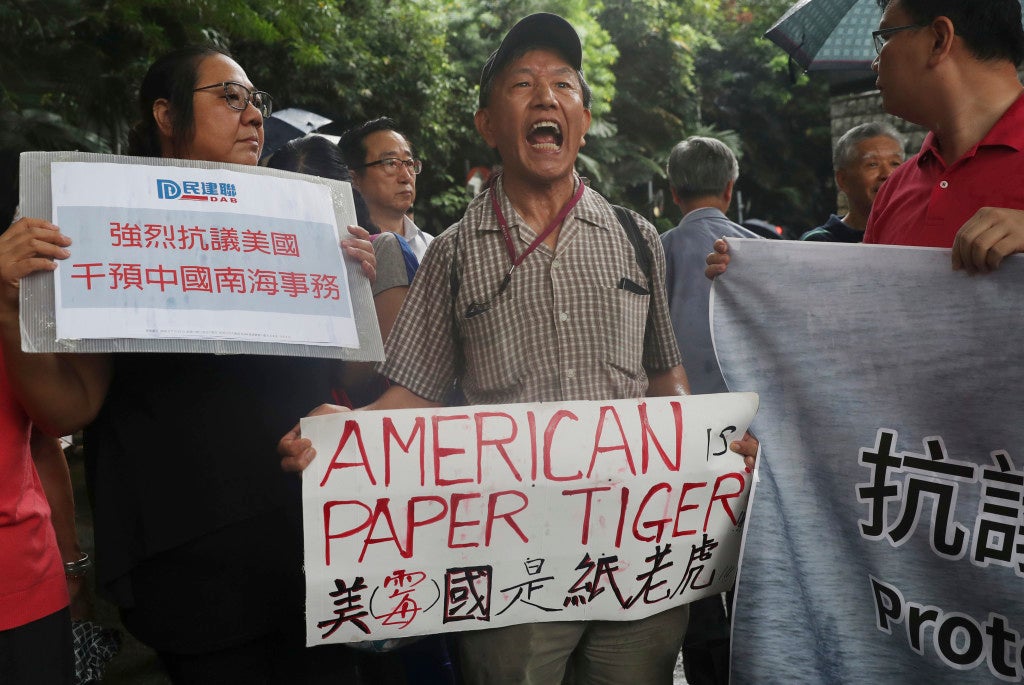 Pro-Beijing protesters shout slogans against the United States supporting an international court ruling of the South China Sea outside the U.S. Consulate in Hong Kong, Thursday, July 14, 2016. China warned other countries Wednesday against threatening its security in the South China Sea after an international tribunal handed the Philippines a victory by saying Beijing had no legal basis for its expansive claims there. A sign, left, reads “Strongly protest against U.S. intervention in South China Sea Affairs.” AP

A RANKING US State Department official said on Thursday that the arbitral tribunal’s “sweeping and decisive decision” on the Philippines’ petition against China could pave the way for countries in the region to discuss anew the code of conduct in the disputed areas in the South China Sea.

“I think this arbitral decision offers a very important opportunity for countries in the region to reengage on question of how countries involved in disputes are going to behave towards each other in geographic spaces that everyone agrees are under dispute,” Deputy Assistant Secretary Colin Willett said in a conference call with journalists.

“I do think that we do have a path forward that involves a serious diplomatic discussion among the countries about what rules of behavior or in essence the code of conduct will look like in those disputed spaces,” Willett added.

The Association of Southeast Asian Nations (ASEAN) and China have had a long-drawn out discussion on the adoption of a formal “code of conduct” governing the actions of claimant nations in the disputed South China Sea.

Then President Benigno Aquino III, who sought the arbitration against China to clarify the Philippines’ maritime rights in the strategic waterway, throughout his six-year term urged ASEAN to forge with China the legally binding code of conduct but stepped down from office last month empty-handed.

Aquino had maintained that arbitration could have been avoided had there been a code of conduct.

Willett said that the US is “working diplomatically with the interested parties to encourage them to use the decision as the basis for discussion on what might constitute acceptable behavior in areas all agreed or under dispute, and to explore potentially down the line things like joint development or and code of behavior.”

Willett said that while the decision of the Permanent Court of Arbitration (PCA) in The Hague was “fairly clear and authoritative, it was also an immensely complex decision.”

“To everyone, all parties (the Philippines and China), the United States, the international community, do need time to digest it and make an assessment of the implications of the decision,” she said.

As questions remain on how the ruling would be enforced, especially with China’s continued refusal to recognize the arbitration and its final decision, Willett said it was incumbent upon both the Philippines and China to “honor” their obligations under the United Nations Convention on the Law of the Sea.

“I think the entire international community has an interest in ensuring that international law is upheld and that all parties adhere to their obligations under the law of the sea. That is a message that I think we are hearing from a number of corners in the wake of the decision and will continue to uphold that principle in defense of a rules based order,” Willet said.

Willett also gave emphasis to the “importance the US places on restraint by all the parties.”

“We call on all parties to refrain from provocative behavior, coercion, or threat, abuse or use of force. We want everyone to respect the rule of law and to clarify their claims consistent with the law of the seas and to look towards finding an acceptable formula for reconciling differences peacefully,” she said.

Willett also said that the US would continue with its freedom of navigation operations program in the South China Sea.

“It is something that we had done for decades to protect the rights of all nations to fly sail and operate wherever the law allows. We will continue to do that,” Willett said.

Willett said that the decision of the tribunal on Tuesday “was a very sweeping and decisive decision.”

Willett outlined the four key elements of the decision:

–       the determination that the features named in the submission of the Philippines are entitled to no more than 12 nautical miles by way of maritime space;

–       the construction of artificial islands and interference in fishing fleet violated the rights of the Philippines; and