‘Great wall’ of protection for PH 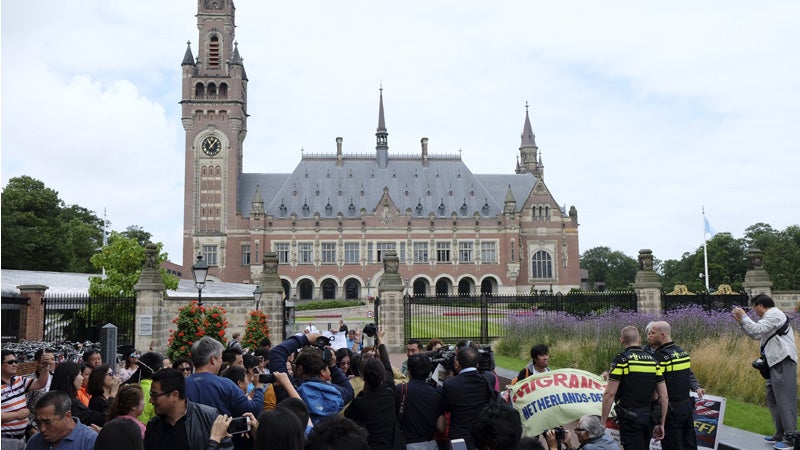 Demonstrators, police, and media gather outside the Peace Palace in The Hague, Netherlands, on Tuesday, July 12, 2016, ahead of a ruling by the Permanent Court of Arbitration (PCA) on the dispute between China and the Philippines over the South China Sea. China has intensified the drumbeat of its opposition to an international tribunal’s ruling expected Tuesday that could threaten its expansive claims in the South China Sea. (AP Photo/Mike Corder)

MANILA — In finding China’s reclamation activities illegal and scoring its destruction of the marine environment, the United Nations’ landmark ruling on entitlements in the disputed South China Sea has created a “great wall” of maritime law to protect the Philippines, an expert on the case said on Wednesday.

Toby Purisima, president of the non-profit organization Trident Defense, had this to say of the historic ruling that favored the Philippines’ bid to nullify China’s expansive nine-dash line claim over the resource-rich waters, calling it a “resounding victory” for the Philippines.

“The Final award of the arbitral tribunal effectively constitutes a great wall of Unclos (United Nations Convention on the Law of the Sea) against China in order to preserve our way of life,” Purisima told the Philippine Daily Inquirer on Wednesday.

The arbitral tribunal invoked provisions of the international treaty in ruling that China may not assert its historical rights over the disputed waters, and that the 200-nautical-mile (370-kilometer) exclusive economic zone of the Philippines must be respected.

While the ruling was not explicit on who owned which of the disputed islands, islets and rocks, the world’s “first ruling on the regime of islands” in the disputed waters recognized the Philippines’ right to its EEZ and cited China’s violations of such entitlement, said Supreme Court Associate Justice Francis Jardeleza.

“This is a strong win because it clarifies the status of maritime features [in the South China Sea]. That’s why this was a difficult case. It involved a lot of preparation. This is the first ruling on the regime of islands,” said Jardeleza, who prepared and filed the arbitration case in January 2013 when he was still Solicitor General.

For one, the ruling clarified that six features — the Panatag (Scarborough) Shoal, Burgos (Gaven) Reef, Chigua (McKennan) Reef, the Mabini (Johnson) Reef, Calderon (Cuarteron) Reef, and Kagitingan (Fiery Cross) Reef — were rocks “above water at high tide” that generate an entitlement of 12 nms of territorial sea, and not an EEZ or continental shelf.

The court did not say to whom the territorial entitlement belongs as it did not rule on the sovereignty of the territories, but it is important nonetheless. For the Panatag Shoal, the court ruled that “its surrounding waters do not form part of the exclusive economic zone,” upholding the rights of nations to exercise its fishing rights in the waters.

The tribunal was explicit in scoring China’s unlawful act of barring Filipino fishermen from the shoal.

“Although the Tribunal emphasized that it was not deciding sovereignty over Scarborough Shoal, it found that China had violated its duty to respect traditional fishing rights of Philippine fishermen by halting access to the Shoal after May 2012,” read the summary of the ruling released by the Permanent Court of Arbitration (PCA).

The court said it would have ruled the same if the situation were reverse, implying that both the Philippines and China had equal rights to fish at the Scarborough shoal, and that neither side could drive each other away.

“The Tribunal noted, however, that it would reach the same conclusion with respect to the traditional fishing rights of Chinese fishermen if the Philippines were to prevent fishing by Chinese nationals at Scarborough Shoal,” the PCA said in its release..

The panel meanwhile ruled that Zamora (Subi) Reef, Hughes Reef (no local name indicated), Panganiban (Mischief) Reef, the Ayungin (Second Thomas) Shoal, and the Recto (Reed) Bank were “submerged at high tide in their natural condition,” hence low-tide elevations that do not generate any maritime entitlement.

Still, said Purisima, the tribunal recognized that Panganiban Reef, the Ayungin Shoal, and the Reed Bank were within the Philippines’ EEZ.

As the summary of the ruling read: “Having found that Mischief Reef, Second Thomas Shoal and Reed Bank are submerged at high tide, form part of the exclusive economic zone and continental shelf of the Philippines, and are not overlapped by any possible entitlement of China, the Tribunal concluded that the Convention is clear in allocating sovereign rights to the Philippines with respect to sea areas in its exclusive economic zone.”

The court said all Chinese activities in these areas “violated the Philippines’ sovereign rights with respect to its exclusive economic zone and continental shelf.”

Purisima also noted how the court underscored China’s environmentally destructive activities in the waters, saying its “recent large scale land reclamation and construction of artificial islands at seven features in the Spratly Islands has caused severe harm to the coral reef environment” in violation of Unclos provisions on environmental protection.

The court also said China did nothing to stop fishermen from “harvesting of endangered sea turtles, coral, and giant clams on a substantial scale in the South China Sea, using methods that inflict severe damage on the coral reef environment.”

The court also noted how China had placed Philippine ships and its personnel in danger in two separate occasions in 2012, at the height of the standoff over the Panatag Shoal.

“The Tribunal found that Chinese law enforcement vessels had repeatedly approached the Philippine vessels at high speed and sought to cross ahead of them at close distances, creating serious risk of collision and danger to Philippine ships and personnel,” the tribunal said.

In Davao City, Bayan Muna Representative Carlos Isagani Zarate urged the international community to step up pressure against China to stop militarizing the West Philippine Sea and ease the situation there.

Zarate also said in a statement that the ruling of The Hague Arbitral Tribunal in favor of the Philippines had strengthened “and solidifie(d) the Philippine position in future bilateral talks with China, especially now that her expansionist 9-dash line theory is declared without legal, historical and moral basis.”

Zarate said that in addition to the international support against China’s “provocative acts,” the Duterte administration should also initiate further diplomatic moves “to strengthen our own claims and fortify our positions, even as we engage China in mutually beneficial bilateral or multilateral talks.”

“Every Filipino here or abroad should defend our territory, our exclusive economic zones, our national sovereignty,” he said. (With a report from Allan Nawal, Inquirer Mindanao)  SFM