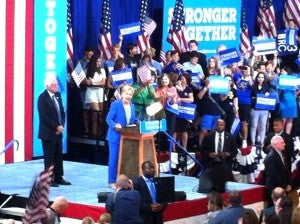 Many Democrats, including Filipino Americans, welcomed the move and expressed great relief that the party is now unified in defeating Donald Trump.

International media descended on the small seacoast town of Portsmouth, New Hampshire, Tuesday. The town of 21,000 mostly white residents is heavily Democratic, with up to 70 percent of voters tending to vote blue.

Portsmouth was a meaningful choice for both Sanders and Clinton in making their pivotal announcement. The day after Sanders announced his candidacy for president in his native Vermont, he held his first rally in Portsmouth. It was in New Hampshire where Sanders won his first primary.

The Clintons too have strong connections to the area. Former President Bill Clinton was called “The Comeback Kid” after he placed a strong second in the New Hampshire primary in 1992. Some pundits wrote him off after he and other candidates gave up Iowa to the state’s favored candidate, Iowa Senator Tom Harkin, and after Clinton seemed mortally besieged by allegations of an extramarital affair with Gennifer Flowers. The unexpected New Hampshire rebound enabled him to ultimately win the presidency. 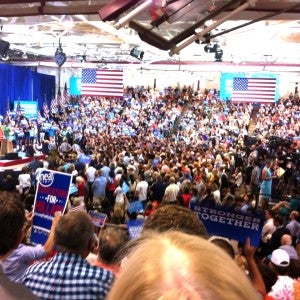 For Hillary, after trailing Obama in the polls in the 2008 New Hampshire primary, pundits credited a video taken in a small restaurant in downtown Portsmouth for giving her a last-minute bounce to actually defeat Obama in the Granite State. In the video, she showed a vulnerable side, welling up as she tried to explain how she managed to survive the physically and emotionally grueling campaign.

Sanders revealed in his speech that as recently as Sunday evening in Orlando, Florida, they were still negotiating to create a unified Democratic Party platform, which to him is now the most progressive agenda in the party’s history.

In her speech, Hillary identified core agreements with Sanders: the need to make education affordable and ultimately free; expansion of health care to all Americans; and the raising of the minimum wage. She also more explicitly assailed the Trans-Pacific Partnership trade agreement, an issue on which she showed some ambivalence in the past.

Ludi Hughes, District 38 Chair of the Democratic Party in Bergen County, New Jersey, expressed great relief in Sanders’ endorsement of Hillary in a note to INQUIRER.net.

“I am glad that the Clinton-Sanders campaign had shifted to a new beginning, a joint platform and new enthusiasm. The endorsement of Sanders is very monumental to the Democratic Party. We need to show a unified party to win this election. Hillary is the best candidate, the most qualified of them all.”

Like many Democrats who were actually in the rally, Hughes emphasized the primacy of beating Trump in the November elections:

“Do we want to lose the elections and let a racist run this country, bankrupt this country, and alienate this country from the rest of world? That’s not who we are. America is great because of the immigrants like us, Filipinos, who came here and made this country prosperous.”

Cesar Torres, a former professor at the University of the Philippines who now resides in the San Francisco Bay Area, called the Sanders endorsement a “great development.” In response to the INQUIRER.net’s request for comment, he wrote, “I listened to Sanders’ eloquent endorsement of Hillary Clinton. I was clapping with glee.” 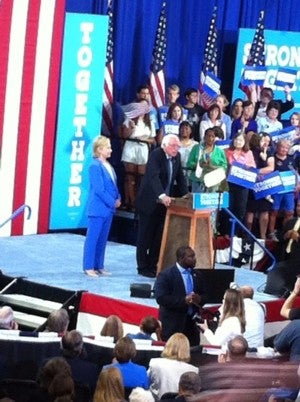 Many Filipino American Democrats view the Clintons favorably because the couple’s connection to Filipinos runs deep. As far back as former President Clinton’s Arkansas days as state governor, he gave a Filipina, Maria Mabilangan Haley, an important role in the state government, appointing her as a member of the Arkansas Industrial Development Commission. Haley focused primarily on international trade, and was responsible for Arkansas’ offices in Europe and Asia and for coordinating Clinton’s trade trips abroad.

Hayley eventually worked at the White House as deputy assistant to the president and as deputy director of the Presidential Personnel Office. Clinton appointed several other Filipino Americans during his term, including Eleanor Concepcion “Connie” Mariano, the First Couple’s private physician.