Duterte gov’t cautioned vs talks with China after UN win 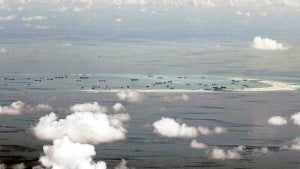 This May 11, 2015 photograph shows land reclamation on Panganiban Reef in the Spratly Islands in the South China Sea. A landmark ruling on Tuesday on the arbitration case brought by the Philippines ruled against China’s claim to almost all of the South China Sea.  The ruling is now seen as a test for international law and world powers. AP FILE PHOTO

MANILA, Philippines — A non-profit organization specializing in defense has urged the Duterte administration to think twice about engaging in direct talks with China, saying the Philippines now has the upper hand after it succeeded in convincing the United Nations arbitral tribunal to invalidate Beijing’s sweeping nine-dash line claim over the South China Sea.

Trident Defense chair Rodrigo Mejia urged government to refrain from engaging in direct talks with China in the wake of the UN ruling, a word of caution to the new administration that had expressed openness to sit down with Beijing even before the decision was released.

“We may be a small country, but we are a nation of warriors.  So let’s show them, no talk to the Chinese for one year or two years. Freeze muna. Show them we are also resolute,” Mejia said in a press briefing Tuesday night.

Lawyer Toby Purisima, Trident Defense president, said the Philippines should instead take advantage of the ruling to show China “what we are made of as a nation.”

“I’m not saying we should fight. But we shouldn’t be too welcoming because maybe we also have pride as a nation, and we have something to fight for,” he said.

The UN arbitration panel ruled on Tuesday that China may not assert its historical claims to roughly 90 percent of the South China Sea, as provisions of the United Nations Convention on the Law of the Sea (Unclos), which delineates exclusive economic zones (EEZ) for respective countries, had superseded the effect of such claim.

China is a signatory to the international treaty but refused to take part in legal proceedings the Philippines had initiated at the Permanent Court of Arbitration at The Hague, invoking remedies under the same document. Beijing rejected the ruling.

Giving a run-down of vital points the court had made in the ruling, Purisima said the arbitral tribunal cited how China violated Unclos provisions in encroaching upon the Philippines’ EEZ.

The court also cited how China destroyed reefs in the disputed waters through its illegal reclamation activities, and failed to prevent its fishermen from undertaking destructive methods of fishing and harvesting giant clams in waters beyond its EEZ.

Purisima said the previous administration did not resort to arbitration for nothing, as the legal action was a final resort when years of negotiations had failed.

“We should not consider joint development activities with China since that would require recognition of China’s claims in the South China Sea and admission of China’s indisputable sovereignty rhetoric,” Purisima said.

“What makes us think that an encroaching neighbor that failed to honor its treaty obligation and the processes under Unclos would honor any joint development activity with the Philippines?,” he said.  SFM