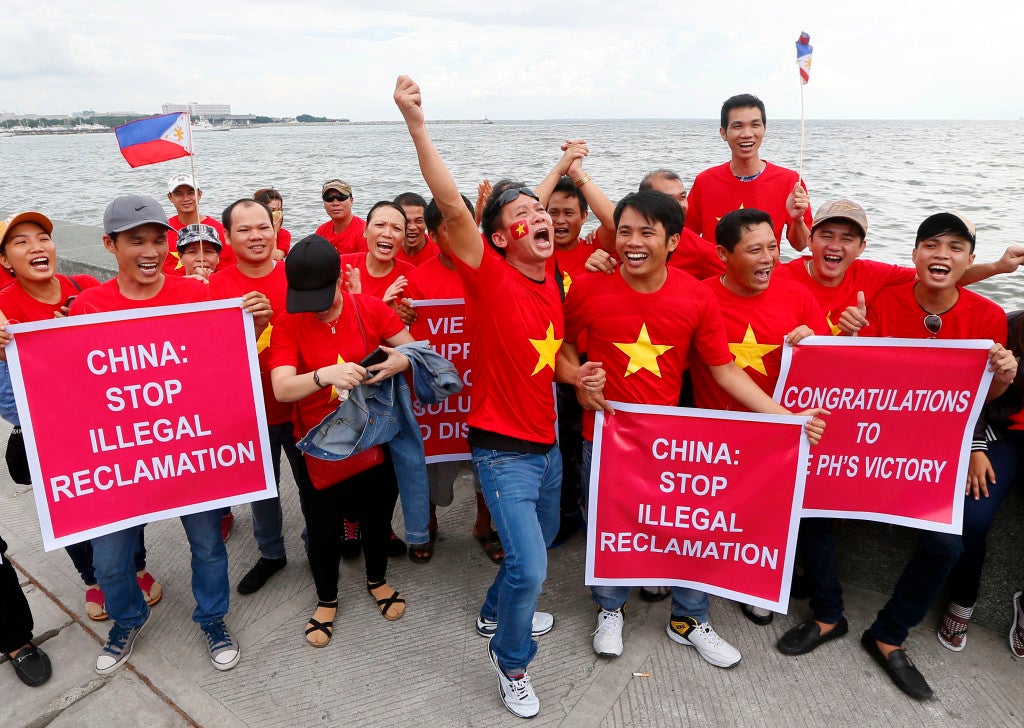 Vietnamese expatriates cheer while displaying placards during a rally by the Manila’s baywalk before the Hague-based U.N. international arbitration tribunal is to announce its ruling on South China Sea Tuesday, July 12, 2016, Philippines. The Vietnamese are supporting the Philippines’ case it filed before the international tribunal on China’s nine-dash line claim in the South China Sea. AP

The Philippine government on Tuesday welcomed the  issuance of an Award by the Arbitral Tribunal on the West Philippine Sea dispute.

“The Philippines welcomes the issuance today, 12 July 2016, of the award by the Arbitral Tribunal constituted by the Permanent Court of Arbitration (PCA) under Annex 7 of the 1982 United Nations Convention on the Law of the Sea or Unclos on the arbitration proceedings initiated by the Philippines with regard to the South China Sea,” Foreign Affairs Secretary Perfecto Yasay Jr. said during a press briefing that lasted a couple of minutes.

“Our experts are studying the award with the care and thoroughness that this significant arbitral outcome deserves,” he said.

The PCA on Tuesday afternoon released its 501-page document on the ruling, accompanied by an 11-page press release.

The release tackled the following issues: China’s historical rights and “nine-dash line” claim, the status of features (such as rocks) in South China Sea, the lawfulness of Chinese actions, its effect on marine environment and the aggravation of the dispute caused by China.

It said China violated the Philippines’ sovereign rights by interfering with its fishermen and by construction artificial islands.

Yasay reminded Filipinos and those concerned “to exercise restraint and sobriety” over the controversial issue.

Various rallies and events were held on Tuesday in anticipation of the ruling.

Other nations are also interested in the ruling since there are several others that have overlapping claims in South China Sea.

“The Philippines strongly affirms its respect for this milestone decision as an important contribution to ongoing efforts in addressing disputes in the South China Sea,” Yasay said.

He said the decision upholds international law, specifically the 1982 Unclos.

“The Philippines reiterates its abiding commitment to efforts of pursuing the peaceful resolution and management of disputes with the view of promoting and enhancing peace and stability in the region,” he said.

According to the Tribunal’s press release, “there was no legal basis for China to claim historic rights to resources within the sea areas falling within the ‘nine-dash line.”

“Having found that none of the features claimed by China was capable of generating an exclusive economic zone, the Tribunal found that it could—without delimiting a boundary—declare that certain sea areas are within the exclusive economic zone of the Philippines, because those areas are not overlapped by any possible entitlement of China,” it said.

Because of this, the Tribunal claimed that China “violated the Philippines’ sovereign rights in its exclusive economic zone by (a) interfering with Philippine fishing and petroleum exploration, (b) constructing artificial islands and (c) failing to prevent Chinese fishermen from fishing in the zone.”

For the past month, local fishermen have been forced to play hide-and-seek or challenge Chinese vessels that prohibit them from visiting their regular fishing grounds. Many have asserted their right to fish in the area despite the threat of violence.

The Tribunal also sided with the claims of environmental groups that China’s large-scale land reclamation to construct artificial islands on top of disputed maritime features was causing “severe harm to the coral reef environment.”

It said China “violated its obligation to preserve and protect fragile ecosystems and the habitat of depleted, threatened, or endangered species.”

On top of that, it criticised China for not preventing Chinese fishermen from harvesting endangered marine animals.

While it decided that it had no jurisdiction on the implications of the stand-off between the Philippines marines and the Chinese navy at Second Thomas Shoal, it said China’s continued reclamation went against the obligation of a country undergoing dispute resolution proceedings.

“China has inflicted irreparable harm to the marine environment, built a large artificial island in the Philippines’ exclusive economic zone, and destroyed evidence of the natural condition of features in the South China Sea that formed part of the Parties’ dispute,” it said.

China has repeatedly refused to participate in the arbitration.