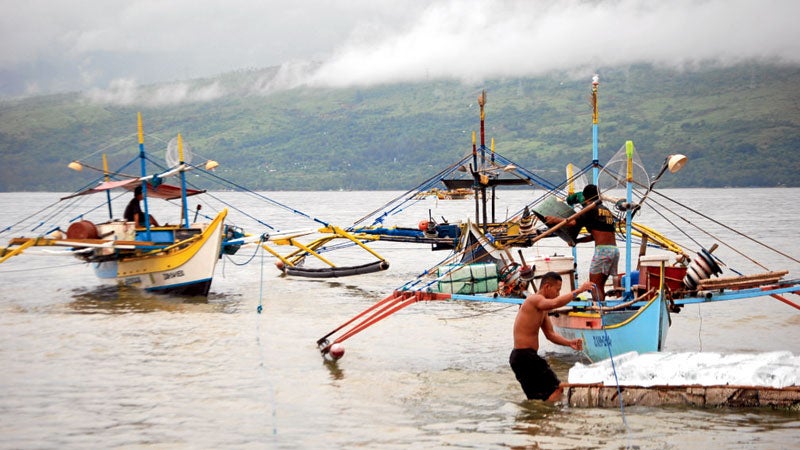 LULL IN LIVELIHOOD Hundreds of fishermen in Subic town in Zambales have been frequenting the disputed Scarborough Shoal to earn a living. They are eagerly awaiting a United Nations tribunal’s ruling on the territorial dispute between the Philippines and China over the West Philippine Sea. ALLAN MACATUNO/INQUIRER CENTRAL LUZON

SUBIC, Zambales—Filipino fishermen frequenting the disputed Scarborough Shoal are bracing for the worst once the UN Permanent Court of Arbitration in The Hague hands down today (Tuesday) its ruling on the territorial dispute between the Philippines and China over the West Philippine Sea.

Crew members of a fishing boat that returned from the shoal after a five-day fishing trip said fishermen continued to approach the rich fishing grounds with caution because of the intensified Chinese presence.

Five Chinese Coast Guard vessels and smaller fishing boats have been keeping the fishermen at bay near the shoal.

“We are afraid of the Chinese coast guards because their number continues to grow. They are roaming around the shoal persistently,” said Ener Anota, 30, a fisherman from Barangay Calapandayan here.

But he said his group and a few other fishermen had been allowed by the Chinese patrols to get close to the shoal and fish for days.

“Only three days and go back to the Philippines,” Anota quoted a member of the Chinese Coast Guard as telling them.

China claims 90 percent of the 3.5-million-square-kilometer South China Sea, including waters within the 370-kilometer exclusive economic zones (EEZs) of its small neighbors, including the Philippines.

The shoal, locally called Panatag, lies 230 km from the coastline of Zambales province and within the Philippines’ EEZ. A triangular chain of reefs and rocks surrounding a lagoon, the shoal has a perimeter of 46 km and an area of 150 sq km, making it a rich fishing ground.

In 2012, China seized the shoal after a two-month standoff between Chinese and Philippine vessels. It has since cordoned off the place, driving away Filipino fishermen from their traditional fishing grounds.

Anota said the number of Chinese patrol vessels had grown in the last two months.

“We can’t tell for sure if those Chinese patrols will leave us alone once the UN ruling is out. We’re hoping that our government will send its own patrols to protect us,” he said.

Should the situation in the West Philippine Sea become tense once again, local fishermen would avoid sailing to the shoal, he said.

“If worse comes to worst, we’re ready to fish somewhere else. But we’re still hoping that China will let us fish freely near the shoal,” he said.

Subic has about 2,000 fishermen, many of whom make frequent fishing trips to the shoal, said Laureano Artagame, head of the municipal fishing vessel registry unit.

“If our government has the political will, we would be able to take back the shoal from China, especially now that many countries are ready to help us,” said Artagame, who also chairs the first-class municipality’s fisheries and aquatic resources management council.

He said the fishermen were monitoring the actions of the government once the court issued its ruling.

“We’re eager to see how the new administration will address the territorial issue with China. But as far as the local officials are concerned, we’re ready to help our fishermen,” he said.

Artificial fish shelters have been set up in the municipal waters to provide the displaced fishermen alternative fishing grounds, according to Artagame.