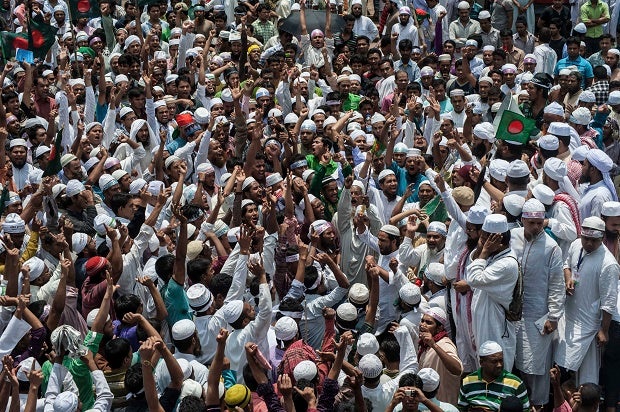 In this May 5, 2013, file photo, Islamic activists block a road in Dhaka, Bangladesh during a protest to demand that the government enact an anti-blasphemy law. The July 1, 2016 deadly attack, the worst in a wave of violence waged by radical Islamists in recent years, speaks to a deeper divide within the nation of 160 million – one that has pitted secularists against those yearning for Islamic rule since the country won independence from Pakistan in a bloody war in 1971. AP File Photo

The Philippine government on Thursday expressed solidarity with the people of Bangladesh after a bloody hostage-taking incident that left 20 people dead.

“The Philippines condemns in the strongest terms the 01 July 2016 hostage-taking incident in Bangladesh,” the Department of Foreign Affairs (DFA) said in a statement.

“The siege in Dhaka is a serious atrocity committed against peace-loving nations and peoples,” it said. “The Philippines expresses its solidarity with the Government and people of Bangladesh and extends sincere condolences to the victims’ families.”

Twenty hostages were killed when heavily armed men stormed a restaurant in Dhaka, popular among foreigners, and held people captive during a 10-hour standoff. Also killed were six attackers and two police officers.

According to the SITE Intelligence Group, the Islamic State of Iraq and Syria (ISIS) has already claimed the attack.

DFA said there were no Filipinos hurt or affected by the incident. Nevertheless, the embassy in the area has issued an advisory to Filipino nationals to “exercise caution.”

It added that Alert Level 1, which advises Filipinos to take precaution, remains in effect in Bangladesh since it was issued in October 2015. Alert Level 1 is issued by the DFA “when there are valid signs of internal disturbance, instability, and external threat to the host country.”

“The Philippine Embassy in Dhaka stands ready to provide assistance to Filipino nationals who may be affected by the incident,” the statement said.

Filipinos in Bangladesh who need assistance from the Philippine Embassy may call +880 191 5477731. RAM