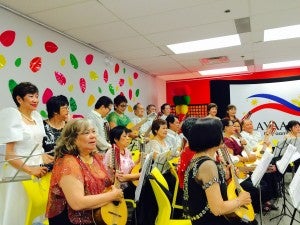 TORONTO, Ontario — Drawing on the Filipino’s love for gatherings and celebrating their heritage, Philippine Consul General Rosalita Prospero and staff invited local community leaders and their guests to a salusalo (get-together) on June 12, the 118th anniversary of the declaration of Philippine independence.

Ladies dressed in colorful kimonas and ternos and menfolk in elegant barong Tagalog flocked to the Philippine Consulate at 160 Eglinton Avenue East as early as 7:30 a.m.  Community leaders and members of various civic organizations made up the guest list.

After registration at 8 a.m., the assembly sang the Philippine national anthem, accompanied by the Scarborough Ontario Seniors Association (SOSA) rondalla.  The Panunumpa ng Katapatan sa Watawat (pledge of loyalty to the flag) followed. 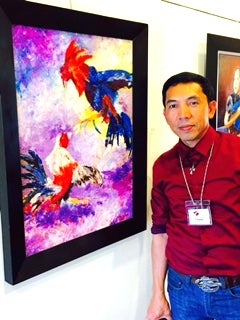 The SOSA rondalla played a medley of Philippine tunes, and The Nightingales, a duo of classically trained sopranos from the Philippines, sang regional folk songs, to the crowd’s delight.

Filipino breakfast staples of daing na bangus, fried rice and adobo, among other viands, washed down with coffee, tea, and calamansi juice, were served to the guests at brunch. 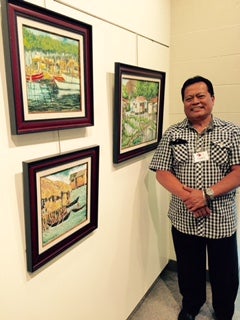 Frank Cruzet and a grouping of his pastoral reflections. MARISA ROQUE

In the afternoon, Consul General Prospero welcomed guests to the formal opening of the annual art exhibition of the Philippine Artists Group.  Titled “Iniibig Ko Ang Pilipinas.  Ito Ang Tahanan Ng Aking Lahi (I Love The Philippines.  It Is The Home Of My Race.),” the exhibit was sponsored by the Consulate. 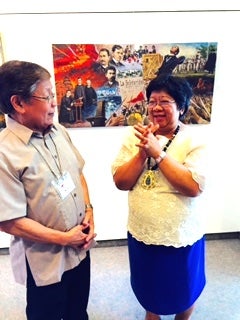 Maestro Romi Mananquil and ConGen Prospero in front of modello of his mural of Philippine heroes. MARISA ROQUE