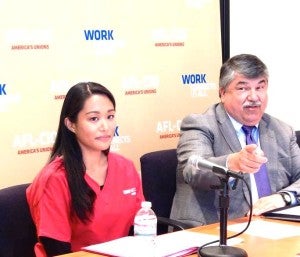 LOS ANGELES – Filipina American nurse Alysha Almada settled with a hospital in Southern California that she said fired her for trying to start a union.

Just shortly before a hearing with the National Labor Relations Board, Almada and another fired nurse reached a settlement with Huntington Hospital in Pasadena, which agreed to pay them nearly $30,000 each in back wages.

Huntington Hospital management also agreed to inform nurses of their rights as hospital staff prepare for a second union certification vote in October.

The settlement also calls for a National Labor Relations Board compliance officer posted at the hospital for the next eight months to monitor the management’s handling of the hospital staff’s workplace rights.

Leaders of the California Nurses Association/National Nurses United (CNA/NNU), other nurses joined Almada in celebrating the settlement and vowing to fight for “a union contract” with the hospital.

Almada has been reinstated at Huntington but may not return, saying she still felt insecure working there because of the “anti-union” atmosphere.

In a statement, hospital management said the settlement was in “the best interest” of both parties and the patients, and confirmed that it had reached an agreement with the nurses’ union and the National Labor Relations Board “to clear the way for a rerun election.”