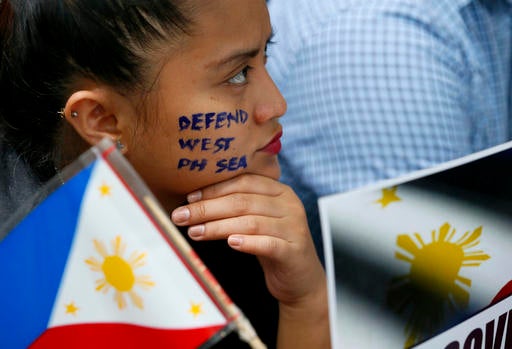 In this Friday, June 10, 2016, file photo, a protester has her cheek painted with a slogan outside the Chinese Consulate during a protest against China’s occupation and island-building in the disputed Spratly Island group in the South China Sea, in Makati city’s financial district east of Manila, Philippines. A case brought by the Philippines against China in an international tribunal deciding the claim, represents a diplomatic dilemma for far-flung nations as Washington and Beijing rally support for their respective positions on the use of international arbitration in South China Sea disputes. AP FILE PHOTO

WASHINGTON— The lead counsel for the Philippines in a high-profile case challenging China’s sweeping claims in the disputed South China Sea says the response of other coastal states will be crucial in the aftermath of an upcoming ruling by an international tribunal.

China is boycotting the case brought before The Hague-based Permanent Court of Arbitration, which announced this week its verdict will come July 12. The court has previously determined it has jurisdiction in the case.

The Philippines, a U.S. ally, is challenging the validity of the so-called nine-dash line that China uses to demarcate its claims to most of the South China Sea, where tensions have been mounting. China has built artificial islands in disputed areas and has been angered by periodic U.S. military patrols nearby.

Paul Reichler, counsel for the Philippines, told The Associated Press late Thursday he was optimistic the court would rule in his client’s favor, and while the court has no enforcement mechanism, international opinion would weigh on China.

“China has made very strong public statements that it does not intend to comply with the judgment of the arbitral tribunal, but that is not the end of the story,” said Reichler, an expert on international litigation and arbitration at the Washington-based private law firm Foley Hoag LLP.

“What China may ultimately do in six months, or a year or two years, may be very different than what it says on July 12 or July 13. I think a lot will depend on the reaction to the award of the international community as a whole, particularly China’s neighbors that have coasts along the South China Sea,” he said.

The case was brought in 2013 by the previous Philippine government of Benigno Aquino III. Reichler declined to comment on how the policy of the new administration of President Rodrigo Duterte, who was sworn in Thursday, might shape the aftermath of the ruling. Duterte has shown readiness to mend frosty ties with China.

Southeast Asia’s regional bloc appears to be divided on the issue, with smaller pro-China nations complicating efforts to forge a consensus. China has been stepping up its public messaging as the ruling date approaches, and garnering support among far-flung nations, mostly in Africa and Mideast. It asserts that its sovereignty over land features scattered around the South China Sea is indisputable, although several other governments have territorial claims or interests there.

Chinese Foreign Ministry spokesman Hong Lei on Thursday said the Philippine case was “an abuse of international law and the international arbitration mechanism” and reaffirmed China would not accept its verdict, the official Xinhua News Agency reported.

China contends the case addresses a question of sovereignty and so lies outside mandatory dispute settlement procedures under the U.N. Convention on the Law of the Sea. However, the tribunal determined in October 2015 that the Philippine case was about interpretation of the convention, not sovereignty, and so it had jurisdiction.

Reichler said the ruling would be binding only on China and the Philippines but would affect other coastal states. He said those states would be unlikely to acquiesce in China’s claims if the court ruled against it.