Clark airport on alert vs threats 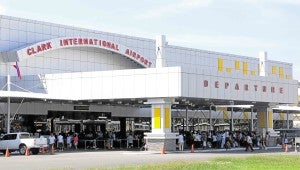 CLARK FREEPORT — Authorities have placed Clark International Airport (CRK) on alert in light of the June 28 bombing of the Istanbul Airport in Turkey that killed 36 people.

In a statement, the state-run Clark International Airport Corp. (CIAC), said its aviation security and police department has advised passengers to arrive several hours ahead of their flights because of stricter protocols that would be imposed before boarding.

“We advise passengers and travelers to be on time for their flights as we are monitoring all movements at the Civil Aviation Complex, especially at the Passenger Terminal Building,” said Edgar Guevarra, head of airport security.

Guevarra said CRK would be “always ready for any eventuality that may occur as its security personnel are well-trained for emergency scenarios to protect passengers and airport employees.”

Ten airlines serving domestic and international routes fly in and out of CRK, a former American military base rebuilt by the Philippine government in 1992.  SFM/rga