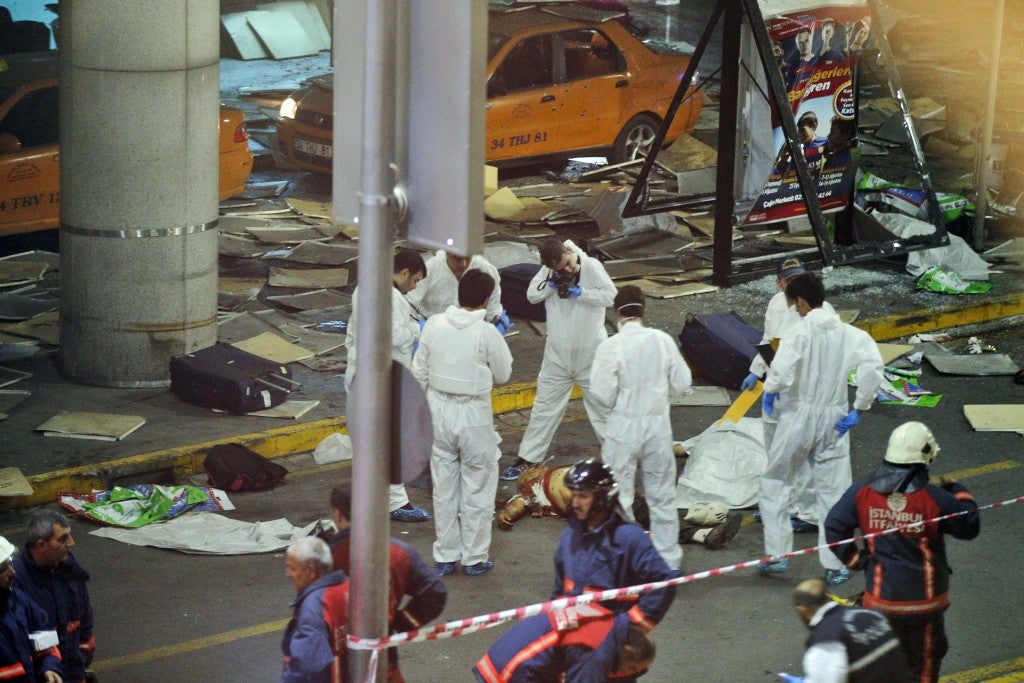 ISTANBUL—UN Secretary General Ban Ki-moon on Tuesday condemned the “terrorist attack” at Istanbul’s Ataturk Airport and called for the perpetrators to be identified and brought to justice.

UN deputy spokesperson Farhan Haq said the secretary general “stands firmly by Turkey as it confronts this threat and stresses the need to intensify regional and international efforts to combat terrorism and violent extremism.”

Mogens Lykketoft, president of the 193-member UN General Assembly, expressed anger and grief at the attack that killed 41 people, including foreigners, and injured more than 230.

“Once again we experience the senseless killing of innocent and peaceful civilians,” he said.

“The international community must—through much closer cooperation—redouble efforts to contain and fight radical and violent extremism,” he added.

In Washington, White House spokesperson Josh Ernest said the United States condemned in the strongest terms possible the attacks at the Istanbul airport.

Ernest said the Istanbul airport, like the Brussels airport that was attacked earlier this year, was a symbol of international connections and the ties that bind nations together.

He said the United States was extending its deepest condolences to the families and loved ones of those killed and wished a speedy recovery to those injured.

Ernest said the United States remained steadfast in its support for Turkey, a Nato ally and partner, “along with all of our friends and allies around the world, as we continue to confront the threat of terrorism.”

US Secretary of State John Kerry said officials were still trying to figure out who attacked the Istanbul airport and what exactly happened.

Kerry was speaking at the Festival of Ideas in Aspen, Colorado.

“This is daily fare and that’s why I say the first challenge we need to face is countering nonstate, violent actors,” he said.

Nato’s chief condemned the “horrific attacks” at Istanbul’s airport, and said Turkey’s 27 allies in the US-led political and military organization stood with it.

Jens Stoltenberg, Nato’s secretary general, said in a statement: “My thoughts are with the families of the victims, those injured and the people of Turkey. There can be no justification for terrorism. Nato allies stand in solidarity with Turkey, united in our determination to fight terrorism in all its forms.”

In Manila, the Department of Foreign Affairs said no Filipino was killed or injured in the attacks.

Philippine Ambassador to Turkey Rowena Sanchez said in an e-mail that all Filipinos in Turkey were safe.

German Foreign Minister Frank-Walter Steinmeier condemned the attacks, saying on the sidelines of an ecumenical Iftar dinner in Berlin that he was shocked at the news.

He said the background of the attacks was still unclear, “but everything suggests that terrorists have once again hit the Turkish metropolis.”

“We grieve for the victims and with the relatives. We stand by Turkey,” Steinmeier said.

EU leaders holding an unprecedented summit about Britain’s departure from the bloc condemned the attacks at the Istanbul airport.

Belgian Prime Minister Charles Michel tweeted from a closed-door meeting on Tuesday in Brussels, “Despicable terror attack. Stand together with people of Turkey.”

Delia Grybauskaite, president of Lithuania, wrote: “Our thoughts are with the victims of the attacks at Istanbul airport. We condemn those atrocious acts of violence.” Reports from AP, Estrella Torres and Nestor Corrales, Inquirer.net