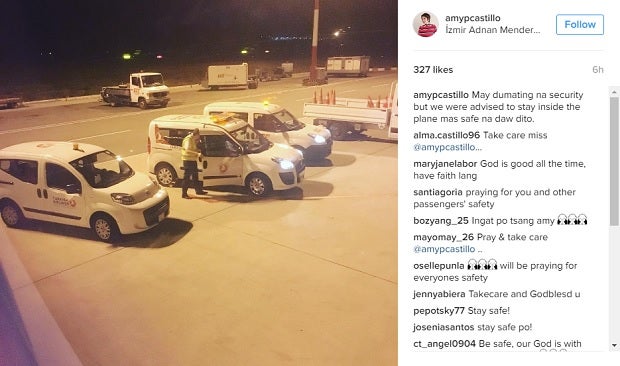 TV and radio personality Amy Perez takes a photo of police cars outside their plane which was diverted to the Izmir Adnan Menderes Airport in Turkey late Tuesday night. The flight of Perez, her husband and 10 other Filipinos was affected when terrorists triggered three bombs at the Ataturk International Airport in Istanbul. AMY PEREZ INSTAGRAM POST

At least 12 Filipinos were stranded in Turkey after the triple suicide bombing and gun attack at Istanbul’s Ataturk Airport Tuesday night at about 10 p.m. (3 a.m. Wednesday in Manila).

TV host and actress Amy Perez was among the stranded Filipinos onboard Turkish Airlines Flight 1860.

Perez said their flight was diverted to Izmir Adnan Menderes Airport in Turkey after the triple suicide bombing at the Ataturk Airport.

After landing at Izmir around 12 midnight, Perez said they were told to stay put for safety reasons. She said they said stayed inside the plane for about two hours.

“May dumating na security but we were advised to stay inside the plane mas safe na daw dito,” she said in an Instagram post.

Perez got the names of the stranded Filipinos on their flight.