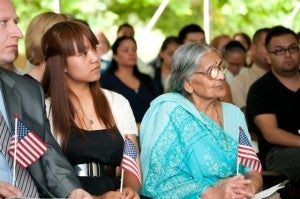 Between 2010 and 2015, the number of Asian Americans grew 19 percent; during the same time period total overall population growth was only 4 percent, according to an analysis of the Census data by Asian Americans Advancing Justice-Los Angeles.

There are now about 21 million Asian Americans living in the United States. Native Hawaiians and Pacific Islanders (NHPI) are now the second fastest growing racial group, growing 13 percent to 1.5 million.

For an interactive map of the Asian American and NHPI population by state, go to http://www.advancingjustice-la.org/PopulationMap2015.

“Asian Americans and NHPI live in every state in the nation,” said Stewart Kwoh, executive director of AAAJ-Los Angeles. “It is important that local social service providers build the capacity to serve these emerging communities.”

According to the Census Bureau, much of the growth among the Asian American population is due to net migration, while other racial groups are experiencing natural population growth.

“Asian Americans are a disproportionately immigrant community, comprised of over 30 distinct ethnic groups, while NHPI have over 20 ethnic groups under their umbrella,” said Joanna Lee, senior research analyst for AAAJ-Los Angeles. “Understanding the incredible social and economic diversity of these growing population groups is critical in understanding how best to address their needs.”