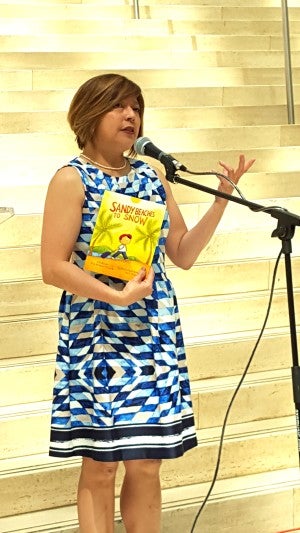 EDMONTON, Alberta –- Edwin Silang, 36, did not do the usual rough-and-tumble bonding activities with his three children to celebrate Father’s Day. Instead, he took them to a book launch on Saturday, June 18.

The event showcased two illustrated children’s books by Filipina Canadian author Mila Bongco-Philipzig that tackle the experience of being uprooted from someone’s homeland and the new things that go with it such as riding in an airplane for the first time or saying goodnight in different tongues.

For Edwin, it is important that his children gain insight into their own experience of moving to another country. His family joined him in Canada in 2014, four years after he emigrated.

His eight-year-old eldest son, Gian, listened intently when the story about two boys and their families getting ready to go abroad was being read. He particularly liked the story about the boy who was feeling anxious before leaving his home by the sea in the Philippines. “Because I was afraid that the plane was going to explode,” he explained.

Once in a while, he said, he still misses his friends and cousins; but when asked if he longed to come back, he said he would only do so to visit.

Edwin said he was glad that there are now books to make the job of explaining the sensitive topic or the themes surrounding migration easier for parents, and by no less than a Filipina.

“They are important so that the children understand and they could give importance as to why we are here, why we are here together. It was not as simple as coming over to Canada just because. It is for them to appreciate their own culture and native land,” he said in Tagalog.

The author Mila Bongco-Philipzig’s window to the world through her travels gave her the pathways in writing her stories.

During a winter holiday in 2015, Bongco-Philipzig was waiting for her son and his friends to go skiing in the mountains when a glance at the colorful ski jackets of other skiers gave her an idea: parallel stories about two boys and their families going from the Philippines to Canada, and vice versa.

She could not say exactly how long she has lived in Canada as she hadn’t had her feet planted until recently. She had lived in countries in Europe, Asia, Africa and North America between 1989 and 2007, with her family in tow.

Her family had only settled down in Edmonton once her son had decided he no longer wanted to always be the “new student.” Plus he also knew the language. 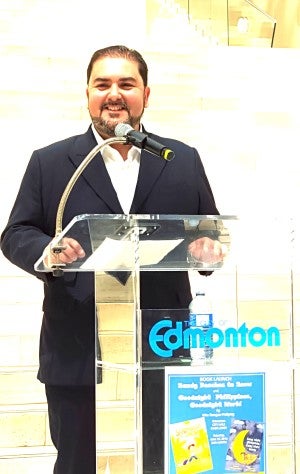 Member of the Legislative Assembly of Alberta Rod Loyola, who is a Chilean immigrant, tells attendees at the book launch that it’s rare to see stories of child immigrants in Canadian libraries. JHONG DE LA CRUZ

Bongco-Philipzig also drew out narratives from her volunteer work around children, helping them explore new experiences and ideas. She has volunteered for Laiya Foundation in the Philippines and the Celebration Church in Edmonton.

“I have also always been fascinated with illustrated children’s books, how the stories come alive in pictures, how the images and words work together and play on each other,” she said. All of these mixed together made a strong urge to create children’s stories.

“I have tons of stories in my head and some scribbled down, but being a busy mother who works full-time and volunteers a lot, I never have the time to focus on making sense of these thoughts or snippets of memories or ideas,” said Bongco-Philipzig, who is project manager at Stantec in Edmonton, a global design firm.

The story compared and contrasted the two countries in terms of weather, transportation and food and inherent Filipino traits like love of family, finding humor in everything and the fears and excitement of traveling.

“’Goodnight Philippines’ comes from my experience traveling all over the world and learning different languages. Much of this was before the Internet, before cell phones,” she said.

She had to depend on public phones to call her family and simple math to figure out time differences where she was and the Philippines during her travels.

“My younger sister was always interested in the different countries and languages where I was. I would always look forward to calling family and friends in the Philippines, but it would also make me sad that I was so far away,” she added.

She submitted her stories to Anvil Publishing Inc. based in Manila, which took published the books this year. According to Bongco-Philipzig, the books are now available in National Bookstore shops in the Philippines.

“In Canada’s history, we have had enormous waves of migration for different reasons. My own story is a story of migration for political reasons; most of the TFWs and people who are coming now are for economic reasons. But those stories don’t make it to the overall narrative [in Canadian] literature… it is not very often that you walk into a library and you see a story about migrants and their experiences,” he said.

Loyola, who represents the district of Edmonton-Ellerslie, came to Canada with his family in 1976, fleeing from the political turmoil in Chile. He said that Bongco-Philipzig’s books are welcome additions for reading especially for school children. “You walk into school, there are more ethnic faces than Caucasians. Canada is a cultural mosaic, we need to celebrate that in many forms,” he said.

Bongco-Philipzig said writing about being in another country, learning new customs, languages and culture would certainly figure in her future projects.

She plans to promote her books all over Canada and elsewhere, as well as write more illustrated children’s books; but she’s unsure when the next one is coming. “My biggest issue is time. I work full-time. I have a family. I like volunteering and running marathons and all of these take time,” she said.

“So, I have no concrete plans right now, but I will work on writing more books that reflect experiences and protagonists relevant to migrant Filipinos,” she added.

Proceeds from the sale of her books will be donated to the youth ministry in her church as well as to a rehabilitation center for abused girls either in the Philippines or Edmonton.