Duterte to US Ambassador Goldberg: Are you with us or not? | Global News

Duterte to US Ambassador Goldberg: Are you with us or not? 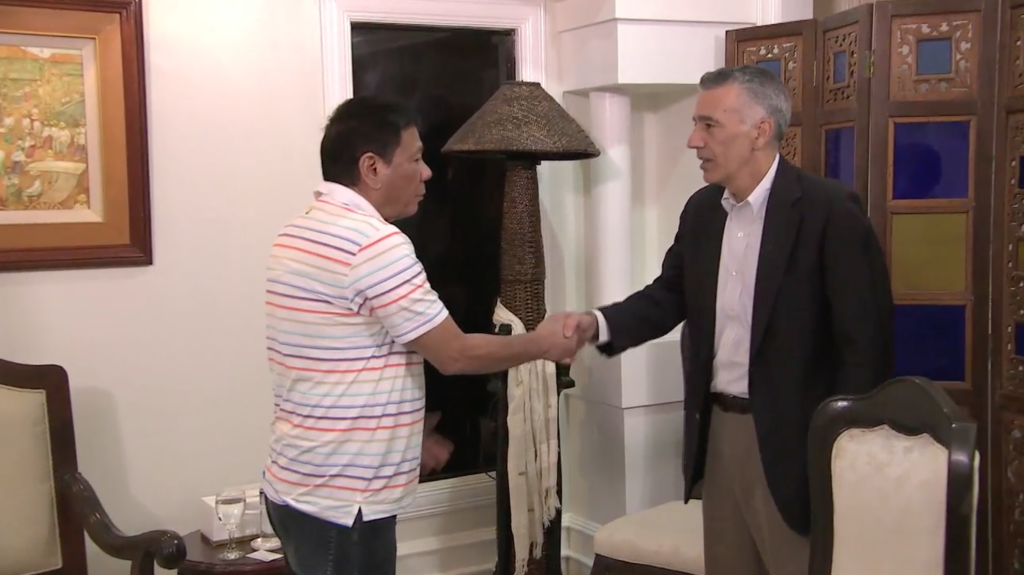 DAVAO CITY—“Are you with us or are you not with us?”

That was the question raised by President-elect Rodrigo Duterte to US Ambassador Philip Goldberg during the envoy’s courtesy visit on June 13 here, he revealed on Tuesday.

Speaking before business executives at the SMX Convention Center, Duterte disclosed that he has asked Goldberg about this concern amid our maritime dispute with China.

“Because I told Goldberg, are you with us or are you not with us?,” he said, adding that he was ready to claim the West Philippine Sea once the United Nation’s tribunal favored the Philippine diplomatic protest.

Duterte mentioned the 1952 Mutual Defense Agreement between the Philippine government and the United States “desiring to declare publicly and formally their sense of unity and their common determination to defend themselves against external armed attack.”

This was agreed upon “so that no potential aggressor could be under the illusion that either of them stands alone in the Pacific area.”

But the incoming President said the agreement is somewhat vague.

“I’ll give you an example. The law of the sea of nations gives us the exclusive right over 200 nautical miles. If I go there using that privilege of mine, would that be an attack against China or an offense against China?” he said.

He reiterated his earlier pronouncements that the Philippines would not go to war with China.

“I will not go to war because of the Scarborough Shoal lang,” he said.

The Scarborough shoal is one of the disputed areas over the gas-rich West Philippine Sea.

“Kung magpadala ako ang navy diyan, a kalokohan yan. We are not in a position. That’s a massacre,” he said.
(If I am going to send the navy there, that would be baloney.)

Duterte said he would wait for the decision of the United Nations International Tribunal on the Law of the Seas (itlos) before finalizing the government’s move.

“I’ve repeatedly said we will wait for the arbitral judgement. Then I will decide,” he said.

During the campaign period, Duterte has already questioned the loyalty of the US amid our territorial dispute.

He said the US would not die defending the Philippines.