Fil-Ams bid farewell to outgoing PH envoy to US 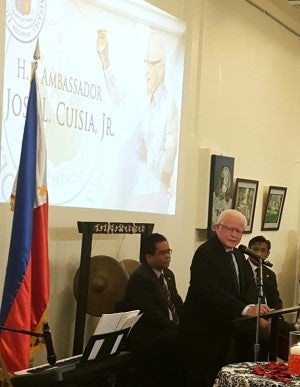 SAN FRANCISCO – Members of the Filipino community bid a warm goodbye to outgoing Philippine Ambassador to the US Ambassador Jose L. Cuisia, Jr. at a farewell reception for him June 20 at the Kalayaan Hall, Philippince Center here.

A similar farewell last week feted the popular Cuisia in Washington, DC, where he reportedly has been dubbed a “rock star” by colleagues in the international diplomatic corps and by “Philippinists” in the US capital.

Consul General in San Francisco Henry S. Bensurto called Cuisia the “hardest working Philippine ambassador to the US” in memory. The envoy reportedly visited Filipino communities in 44 states while seeking trade resources for the Philippines. 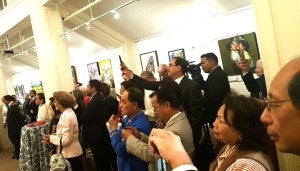 Filipino Americans listening to Ambassador Jose L. Cuisia at the farewell reception for him at the Philippine Consulate. RODEL RODIS

Cuisia, Bensurto said, was the day-to-day face of Philippine interests in the US Congress where the envoy would go “office by (congressional) office to explain the Philippines’ views on key issues. “That’s what it takes to win allies for the Philippines” among US lawmakers, he said.

“Next to Foreign Affairs Secretary Albert del Rosario, Ambassador Cuisia was responsible for making the US more active in the West Philippine Sea issue,” said Bensurto, the country’s foremost legal expert on the territorial conflict with China. 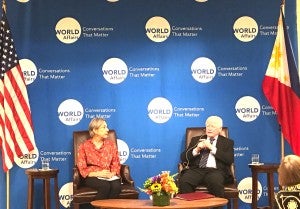 Early in the day, Ambassador Cuisia was hosted by the World Affairs Council at a luncheon. He is seen here with Susan Siskel, executive VP and COO of Asia Foundation. ESTHER CHAVEZ