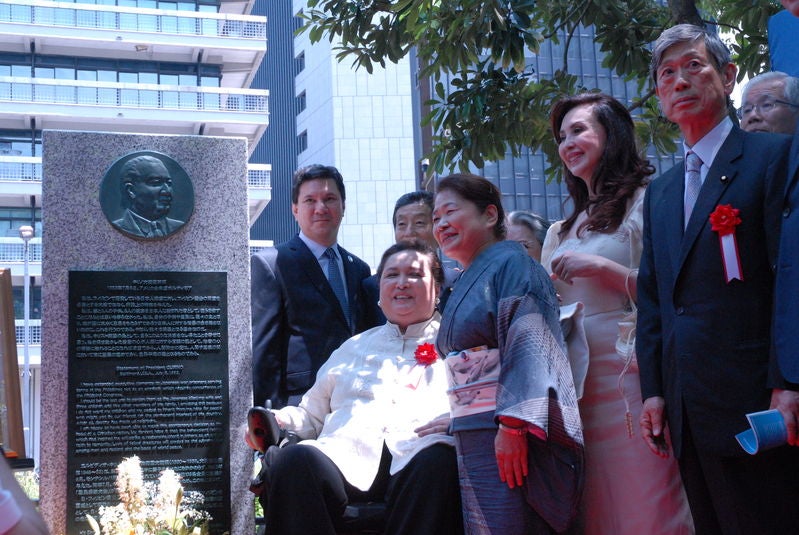 A memorial to former Philippine President Elpidio Quirino (1890-1956), who set the tone for a normalization of diplomatic relations between his country and Japan by granting pardons to more than 100 Japanese war criminals, was unveiled on Saturday in Hibiya Park, Tokyo.

The unveiling of the memorial took place on the occasion of the 60th anniversary of the re-establishment of diplomatic relations between Japan and the Philippines.

According to the Foreign Ministry, Quirino, who was president from 1948 to 1953, granted pardons in June 1953 to all 105 Japanese war criminals who were detained in Muntinlupa prison, south of Manila. Quirino lost his wife and three children during the 1945 Battle of Manila, in which a great many Filipino civilians became casualties.

The two countries revived diplomatic ties in 1956, three years after the pivotal decision Quirino made despite his unspeakably complicated feelings.

The memorial, which was built with the support of The Japan-Philippines Parliamentarians’ Friendship League and other organizations, is inscribed with a statement Quirino issued in July 1953: “I am doing this because I do not want my children and my people to inherit from me hate for people who might yet be our friends, for the permanent interest of the country. After all, destiny has made us neighbors.”

During the ceremony, which was led by the Philippine Embassy in Tokyo, Liberal Democratic Party Vice President Masahiko Komura said, “I must praise his merciful nobility and generosity to forgive the unforgivable; his courage to grant amnesty without fear of criticism for the sake of the future Japan-Philippine friendship should be regarded as the attributes of a true patriot and true politician.”

Ruby Gonzalez-Meyer, 62, a granddaughter of Quirino, returned thanks to those attending: “The President Elpidio Quirino Foundation and the Quirino family are truly grateful for the memorial.”

Gonzalez-Meyer said amnesty “was not the right decision for a politician seeking the popular mandate during that election year,” but was the correct decision nonetheless, “as evidenced by the great friendship between the Philippines and Japan at this time.”

From Shimane Prefecture, a daughter of Japanese painter Kanrai Kano (1904-1977), who sent Quirino many letters seeking pardons of Japanese prisoners, also attended the ceremony. Kano’s daughter Kayoko, 71, told The Japan News: “In 1953, President Quirino made a decision to forgive all. Nowadays, after more than 60 years, his decision has been confirmed as a great one. We’ll have to convey such feelings to the future.” TVJ