Fil-Am national empowerment confab to be held in Philadelphia 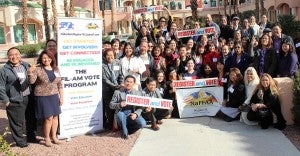 Among those invited to give a keynote speech at NaFFAA’s (National Federation of Filipino American Associations) 12th National Empowerment Conference is Philippine Vice President-Elect Leni Robredo, a Congresswoman from Camarines Sur.

The 52-year-old lawyer and social activist is known for her advocacy on behalf of women and the country’s poor. The mother of three children, she is the widow of former Interior Secretary Jesse Robredo.

Also invited, and confirmed, is Filipino American performer Allan Pineda Lindo, more popularly known as apl.de.ap of the Black Eyed Peas. The Grammy Award winner is part of a panel on “Pursuing a Career in the Performing Arts: Opportunities and Challenges.”

The singer reached out to the Philippines after Typhoon Haiyan struck in 2013. Through the apl.de.ap Foundation, he has been involved in rebuilding efforts in typhoon-affected areas. NaFFAA will honor him with a “Trailblazer Award” at Saturday’s Gala Dinner.

They include Maj. Gen. Antonio Taguba (Ret), who is spearheading a campaign to secure the Congressional Gold Medal for Filipino World War II Veterans; Wei-Tai Kwok of the Climate Reality Project; industrialist and philanthropist Loida Nicolas Lewis; multimedia journalist Rose Tibayan; musician Michael Dadap; regional banking vice president Brendan Flores and U.S. Representative Bobby Scott of Virginia, the first American with Filipino ancestry to serve as a voting member of Congress. He is slated to give the opening keynote address.

“We are excited to host this conference in our beloved city, the birthplace of America and the City of Brotherly Love and Sisterly Affection,” says NaFFAA Region 1 Chair Aida Rivera. “A warm Philadelphia welcome awaits community leaders and guests from across the country, including Guam, Canada and the Philippines.”

Delegates are expected to arrive August 4 to register and avail of opportunities to tour the city, which ranks ninth among world cities and fourth in the nation. As the only World Heritage City, Philly is known for its arts, culture and national historic landmarks, attracting over 39 million domestic tourists in 2013

The conference formally opens Friday morning, August 5, with Philadelphia Mayor Jim Kenney expected to welcome the delegates. A Gala Dinner on Saturday will conclude the event.

Among the highlights is a special awards program honoring the legacy of Alex Esclamado, NaFFAA’s Founding Chairman and lifelong advocate of Filipino American unity and empowerment. The Alex Esclamado Memorial Award for Community Service, which was conceived by NaFFAA and GMA International, was first conferred in August 2014 at the 11th National Empowerment Conference in San Diego, California.

GMA International is the international arm of GMA Network, the leading television network in the Philippines, which has been telecasting in the US and worldwide through GMA Pinoy TV, GMA Life TV and GMA News International. GMA has been a consistent supporter and partner of NaFFAA in many public service and FilAm community undertakings.

Another feature is an Inter-generational Dialogue led by Empowering Pilipino Youth through Collaboration (EPYC), an initiative developed by the youth to promote best practices for transitioning from student to community organizing.

NaFFAA delegates will elect a new set of national officers at the conference for a two-year term. National Chairman JT Mallonga has announced he is not running for re-election. The positions to be filled are National Chair, National Vice Chair, National Secretary and National Treasurer. New members to the Board of Governors (BOG) will also be elected.

Formed in 1997 in Washington, D.C., NaFFAA is the only national Filipino American organization committed to the political empowerment of the nearly 4 million Filipinos in the U.S. today. In the last 19 years, NaFFAA’s advocacy initiatives have focused on securing equity benefits and recognition for Filipino World War II veterans, voter registration and education, overseas voting and dual citizenship rights.

The venue for this year’s National Empowerment Conference is the Valley Forge Casino Resort on 1160 1st Avenue, King of Prussia, Pennsylvania 19406 .

For more information, go to http://www.empowermentphilly.com/.