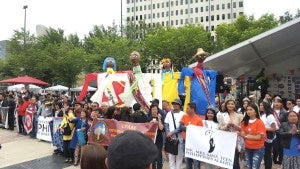 RED DEER, Alberta – Longing to feel that familiar vibe of Filipino festivities, organizers in Edmonton held the first Filipino fiesta in the city in 50 years of Filipino immigration.

On June 11 and 12, over 6,000 people celebrated with the Filipino community to commemorate the Philippine’s 118th independence, fiesta organizers had said.

A colorful parade on June 11 signaled the start of the two-day celebration. Nineteen Filipino organizations in Edmonton joined the parade bringing in a throng of 600 members. The event was held in the city’s Sir Winston Churchill Square.

Organizer Tony Santiago said the idea of holding a Filipino fiesta was born after realizing that although Filipinos comprise a significant chunk of the migrant sector in Edmonton City, they have not shared a single event until then. 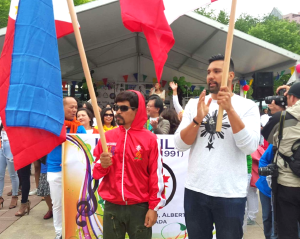 There were 25,555 Filipinos living in Edmonton in 2011 based on the recent census by Statistics Canada.

“Filipinos have been in Edmonton for fifty years. They have not had a Filipino fiesta, unlike other North American cities who have established fiestas…we felt that it was about time that Edmonton had one,” said Santiago.

With the help of other Filipinos, Santiago brought up the idea in February but the actual planning did not pan out until March, he said.

“It was a very challenging process since we were new and very few sponsors actually believed we can pull it off. Most of the time we did not know what we were doing but we just went ahead and learned along the way.  A good number of people in the community wanted this to happen but adopted a wait and see attitude,” he said.

Santiago, who has been an Edmontonian from the Philippines for three years and works as an immigration consultant, involved his own group, the UP (University of the Philippines) Alumni Association of Edmonton, and sought the help of Pekiti Tirsia Kali Society of Alberta, which teaches Filipino indigenous fighting arts, to host the event.

The organizers’ aim was to provide a venue for Filipinos to showcase their culture and traditions through songs, dance, fashion and food, said Santiago. 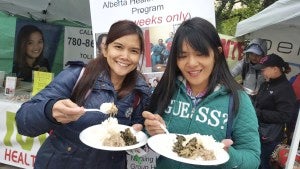 “We wanted to provide a venue for our kababayans [to have] a taste of home, as well as opportunity for Canadian-born Filipinos to experience Filipino fiesta,” he added.

The event served as a venue for four food vendors, two bouncy castles, a children’s pavilion, which hosted famous Filipino traditions in parol-making and sipa.

Notable contributions also came from the Filipino Freemasons of Edmonton,which provided some funding and manpower. For the arts and dances, well-known Filipino performers and artists Jojo and Ida Lucila were tapped.

Because of its success, organizers have decided to make the Filipino fiesta an annual event.

From her point of view, the event served as a platform to gather Filipino artists to allow them to express their artistry and increase their exposure both to the Filipino community and the global audience, said Ida Lucila.

“The secondary role is to build a network of artists in the Edmonton community to enhance and increase the imprint of Philippine art and the Filipino artists in the local art community,” she added. 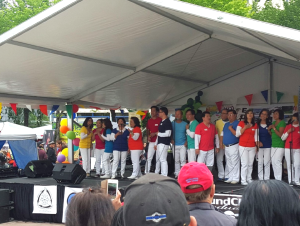 According to Lucila, the event staged a wide range of performances which featured different genres of music including pop, original compositions, bands, choral, rock, folk, rondalla and kundiman, while folk, Polynesian, hip-hop and ethnic-types of dances were shown. The event even exhibited Philippine fashion design and comedic acts.

Performers also were from various types — from professionals to emerging artists, and arts enthusiasts, and from all ages — children as young as 4 and 5 years old to senior citizens. The audience witnessed some 35 performers showcase their talents.

Since moving to Canada, the Lucila couple has established companies and projects in Edmonton such as the Chameleon Dance Edmonton and the Philippine Arts Festival in 2010. In Manila, the couple founded the Chameleon Dance Company and Teatro Silencio, a dance company of hearing-impaired dancers.

The couple runs The Lucila Project in Edmonton, which offers dance classes, choreography and arts consultancy.