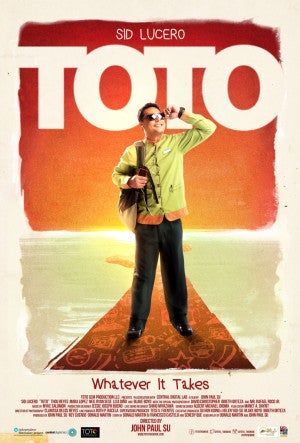 “Toto” is set in a Filipino hotel in Manila where the protagonist (Lucero) attempts to use every possible means to obtain a U.S. visa, to provide a better life for his family.

Su co-wrote the film, based on a true story, with Donald Martin. The cast includes Sid Lucero who portrays Toto, Thou Reyes, Liza Dino, Bembol Rocco, Bibeth Orteza, among others.

The movie attracted a capacity audience of Caucasians, African Americans, Hispanics, Asians and Filipinos in a mid-size theater along Melrose.

The Los Angeles Comedy Festival is the largest comedy festival in the U.S. featuring Film, Live Comedy Acts and a Screenplay Competition. The past festivals have featured thousands of performers and hundreds of films from LA and around the world.

Past participants have gone on to win the Oscar for Best Short Film, Last Comic Standing, signed Web series development deals for Network TV, and received feature film theatrical distribution, among others.

“Toto” strikes a familiar theme: the Filipinos’ “dream to come to America.” It’s entered the festival as a “black comedy,” and some detect an underlying satirical comment on such aspirations. 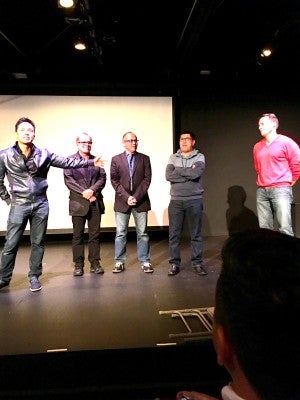 JP, as Su is known, graduated from De La Salle University in Manila and New York University and has received numerous awards from prestigious international film organizations like the Directors Guild of America (“Pagpag”) and the Gold Quill International Association of Business Communicators (“Habitat for Humanity”).

“I like to write and make films that cross over different cultures and touch universal themes, like ‘Toto’. It is about resilience to overcome adversity; love for family; the mother and child story; friendship; love versus career – these are themes that resonate in moviegoer’s life, whoever or wherever they are, said Su in an interview with this writer.

“This film is like an onion – it has many layers that you peel; in every layer you’ll find a different sense, just like our human condition. That’s how the Filipino diaspora and the lives of the Filipino overseas worker could be understood,” Su explained.

Indeed, “Toto” has created a metaphor for “America” in the Filipino hotel setting where individuals of different background interact, each one with a compelling story.

A “white man,” Dave (played by Hollywood actor Blake Boyd) gives Toto, the hotel service attendant, his “passport” to America. The denouement portrays Dave as a Russian immigrant himself, adopted by Jewish parents.

“We all search for an advocate in our life to take the next step, and thematically, that’s the overriding message of ‘Toto’.”

Su referred to multi-awarded filmmaker Carlitos Siguion-Reyna (“Azucena”), who was his professor at NYU, as his advocate who has opened many doors for him as a young immigrant in the profession. He also cited Palanca and Urian winner Ricky Lee (“Himala”) and Oscar winner Taiwanese filmmaker Ang Lee (“Crouching Tiger, Hidden Dragon”) as having had an impact on his body of work.

“Toto” is JP Su’s first full-length film and su hoped this project would open doors for him in Hollywood as a filmmaker of significance.

“Toto,” was filmed in the Philippines in 17 days with a budget of less than a million dollars. He said finding mainstream financial backing for it was difficult. He had to rely on personal funds, family and friends’ support.

Su laments that “Hollywood seems to think that a film with African and Caucasian in major roles constitutes ‘diversity,’ and that’s detrimental to the other minority groups who are trying to make it in the business. 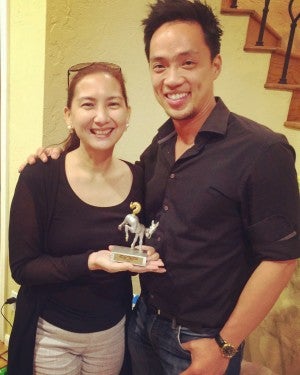 “Toto” film editor Manet Dayrit with JP Su and “Best Actor Kickass Trophy” for Sid Lucero from the LA Comedy Festival. Dayrit will bring back the trophy to Manila for Lucero. CECILE OCHOA

Su said the disadvantage of being an “invisible minority “ in America is that the unique characters of Asians, not to mention Filipinos, are not distinctly portrayed in films. “There seems to be a notion that Asian or Filipino markets are similar to the white market – that Asians buy the same stuff as the Caucasians; they don’t see us as a force to reckon with; we are not a specific market.”

He noted that Filipino filmmakers in Hollywood are in the last line of the “minority back line,” in terms of gaining publicity and support.

Like films with modest budgets, don’t expect slickness in its technical quality. However, veteran movie critique and Urian Board member Mario Hernando told this writer: “Indie films (like “Toto”) are usually much more substantial and better-made. Gloss after all is not the hallmark of great cinema.”

“There’s a ‘Toto’ in all of us,” says the film’s promo. Is there an Oscar forthcoming for “Toto?”

“Of course, that would be a dream come true,” said Su, “but a nomination has to come from the Philippines as its entry in the Best Foreign film category.”  For now, he’s preparing to show “Toto” in different film festivals in the U.S.