CBCP on Orlando shooting: Our differences can never justify hate 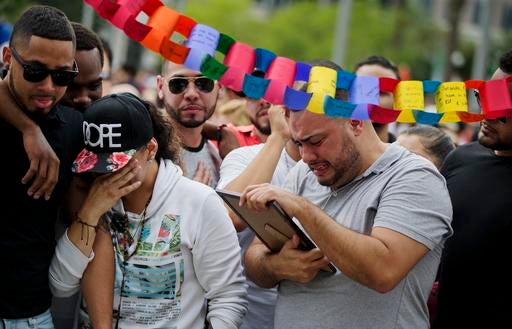 Jose Hernandez, right, cries as he looks at a photo of his friend Amanda Alvear, who was killed in the mass shooting at the Pulse nightclub, as he visits a makeshift memorial with friends, Monday, June 13, 2016, in Orlando, Fla. A gunman killed dozens of people in a massacre at a crowded gay nightclub in Orlando on Sunday, making it the deadliest mass shooting in modern U.S. history. AP Photo

The Catholic Bishops’ Conference of the Philippines (CBCP) denounced the shooting in a gay nightclub in Orlando, Florida which killed 49 people and wounded at least 53 more, saying that the attack was a hate crime.

In a statement on Monday, CBCP President and Lingayen-Dagupan Archbishop Socrates Villegas said the attack was a hate crime because this was “the murder of persons because of disgust for their sexual orientation.”

“Bearing in the depth of his or her soul the image of the Creator, no human person should ever be the object of disgust. While we may have reasons to disagree with sexual preferences, or reprove certain forms of sexual activity, this can never justify hatred, let alone, murder of another human being,” Villegas said.

“Violence leaves only mourning, and loss, and bitterness in its wake.  We cannot and should not accept a society that tolerates and perhaps even foments forms of violence, even if this should be in the name of restoring law and order,” he added.

He urged school administrators to be vigilant about cases of bullying, harassment, and ostracism.

Villegas also asked the government “to educate the nation in the ways of the respect for all life.”

The shooting at the Pulse nightclub last Sunday was dubbed as the worst mass shooting in modern US history. The gunman, 29-year-old Omar Mateen, was an American-born Muslim who worked as a security guard in Florida. He was previously investigated by the FBI on suspicion of sympathizing with terrorists.

Mateen’s father suggested that the motive behind the attack was anti-gay hatred, saying that his son got angry when he saw two men kissing in Miami a few months ago. IDL/rga