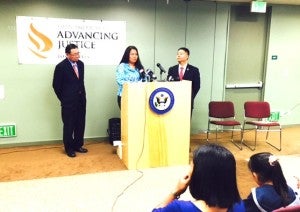 LOS ANGELES — ”I don’t care if there is no customer or if the customer is a fly or a mosquito, you are not allowed to take a break to eat.”

This was one of the incidents with one of the defendants related by Gina Pablo-Grossman, one of the 11 plaintiffs in the successful lawsuit against the owners of L’Amande bakeries, as she and others met June 9 with the community and media here to celebrate their landmark legal victory.

On May 2, a year and two months after the workers filed the lawsuit Judge Fernando M. Olguin granted the 11 workers a default judgment of $15.2 million in damages and fees. The court agreed that the workers were trafficked to the U.S. to serve as domestic servants and back-of-the-house employees at two high-end bakeries owned by defendants Analiza and Goncalo Moitinho de Almeida.

They were also granted T visas, also known as T Nonimmigrant Status, which provides victims of human trafficking temporary legal status and work authorization and allows them to bring their families to the U.S.

In October 2000, Congress created the “T” nonimmigrant status by passing the Victims of Trafficking and Violence Protection Act (VTVPA). The legislation strengthens the ability of law enforcement agencies to investigate and prosecute human trafficking, and also offers protection to victims. 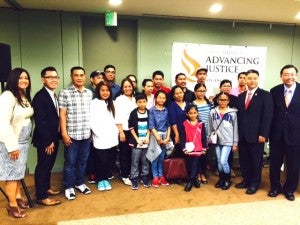 Tearful and nervous, Pablo-Grossman recalled she was recruited by her former employer to work as a nanny and brought to the U.S. in 2009. Not only did she work at her employer’s house, but she also worked in the kitchen of the bakery.

“Whenever Ana (her employer) would see me and Ermita (a former co-employee) take a break (after long hours of work), she got mad as if we killed somebody,” Pablo-Grossman told a sympathetic audience at the office of Asian Americans Advancing Justice-Los Angeles (Advancing Justice-LA), headed by Executive Director Stewart Kwoh.

Asked why she did not complain, Pablo-Grossman said she was afraid that she would be deported. “I didn’t know anyone here – I was forbidden to talk to anyone, to the neighbors.” 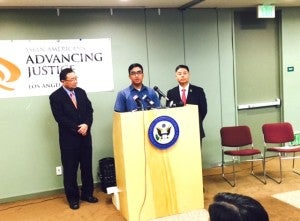 Eager to reunite with families

Romar Cunanan told INQUIRER.NET each one of them stand to receive more than a million, “but we’re not thinking about the money right now; we’re eager to be with our family to come join us as they were also granted T visa to come to the U.S.”

“I’m working right now in another place and definitely they treat me better,” he said. “I couldn’t stop working because I’m trying to prepare to support my family when they come.”

Cunanan voiced the same grief as the others: “We cleaned their houses, washed windows same time that we worked in the bakery. We were not thinking of complaining at first because we wanted to please them until we could save enough money to return to the Philippines.”

A second-generation Filipino American in the audience said he didn’t realize this “kind of slavery” still exists today.

In March 2015, Congressman Ted W. Lieu met with the workers, concerned about the employer’s abuse of the guest worker program as part of a scheme to obtain forced labor. As a result of the meeting, Lieu (33rd district of California) reached out to U.S. Citizenship and Immigration Services (USCIS) in support of the workers.

“During our meeting, the Filipino guest workers recounted a systematic and lengthy period of verbal and physical abuse by their employers. It is disheartening to know that human trafficking can occur so close to home and that individuals are subjected to such psychological and inhumane treatment,” said Lieu.

He said further: “In this case, the Filipino workers’ story ultimately ends with a victory in justice’s name. Sadly, however, their story is just one of many. I will work with Advancing Justice-LA on ways to improve how our government assists victims of human trafficking and to prevent future cases so women, men and children are not subjected to such deplorable treatment in the United States.”

With the T visas, the 11 workers have a chance to rebuild their lives here in the United States, including the ability to find other employment. All 11 workers are now employed in other bakeries and several are planning to bring over family members they have not seen in years.

“I am grateful for the hard work of our lawyers, and, to Congressman Ted Lieu, for listening to our hearts and believing in us,” said Romar Cunanan, one of the workers recruited to work at the bakery. “With his kind heart, he helped all of us to get T visas so we can continue to work here in the U.S. and to reunite with our family, without fear of what defendants can do to us.”

Advancing Justice-LA filed the T visas on behalf of the workers with the help of attorneys Nicole Kim, Angela Makabali, and Maximillian Hirsch, working under the auspices of the law firm Skadden’s pro bono program.

Trafficking victims to get help

Lieu also announced during the press conference that his office is willing to support any potential victims of human trafficking, in coordination with the Asian American Advancing Justice.

“One landmark case is the national origin case by nurses filed against a Delano hospital alleging that the employees where prohibited to speak in Tagalog at the workplace,” said Kwoh. It is believed to be the largest language discrimination settlement in the U.S. healthcare industry ($975,000 settlement, according to the former Asian Pacific American Legal Center). The hospital denied having violated the law but settled to avoid further litigation expenses.

Lucio Tan advances to PAL hits P17.7B amid mounting losses due to COVID-19