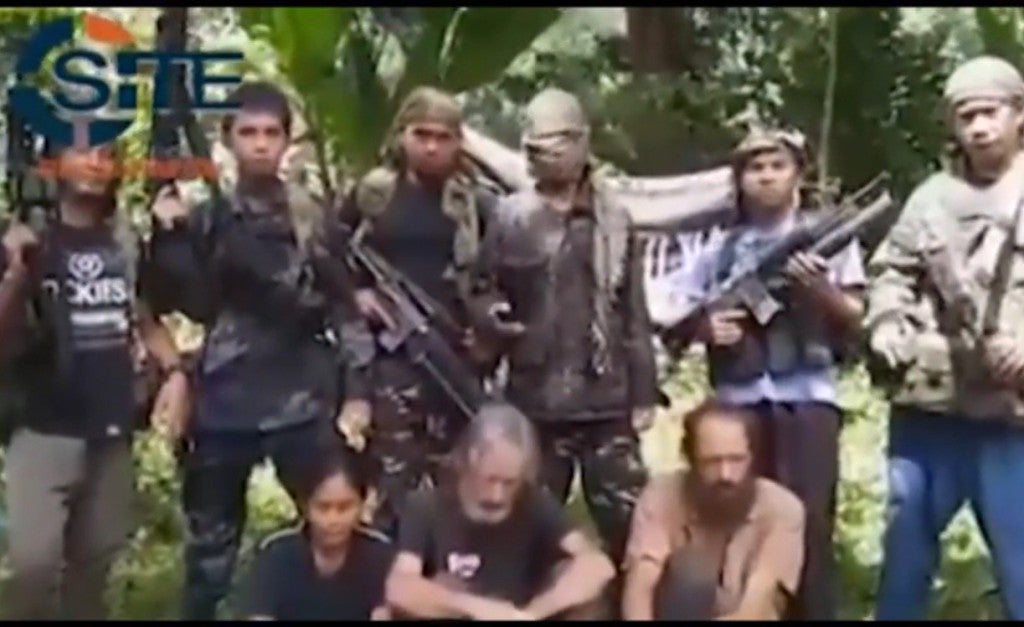 ZAMBOANGA CITY, Philippines—As the clock ticks before the 3 p.m. deadline expires, the three Abu Sayyaf captives on Monday are calling on the governments of the Philippines, Canada and Norway to save them.

“My condition is pretty bad. We have been starved, our sleep is deprived and they threaten to beat me,” Canadian Robert Hall told the Inquirer by phone late Monday morning.

Hall repeatedly pleaded for the immediate intervention of the Philippine government.

Hall said he had no idea what would happen to them, but he was informed that their lives might end today.

“Please get us out of here if (President-elect Rodrigo) Duterte wants to help us, help us to get out of here,” Hall said before giving the phone to Filipina Maritess Flor.

“Andito kami sa kalagayan na hindi namin ginusto. Hindi namin alam kung ano ang plano ni Lord, sana maligtas kami (We don’t want the situation we are in. We don’t lnow what the Lord’s plan is but I hope we would be saved),” Flor said.

Ridsel was beheaded by their Abu Sayyaf captors last April.

She said their captors were hurting them.

“Sinasaktan kami. Lalo ng iba pa nilang kasamahan. Binubugbog kami, ako sinasampal (They are hurting us. Especially their other accomplices. They are beating us, they are slapping me),” she said.

She said Kjartan Sekkingstad, a Norwegian, managed to contact his relative last night.

“Wala pa akong nakakausap sa pamilya ko (I haven’t talked to my family yet),” she said.

Flor also called on Duterte to help them.

“Sana po hingi ako tulong kay Duterte. Tulungan kami. Nahihirapan kami araw-araw. Ako ang nakakintindi at marinig mo yung plano nila na putulan ka ng ulo (I am asking for Duterte’s help. Please help us. We struggle everyday. I’m the only one [among the captives] who understand what they are saying and I could hear their plan of beheading us),” Flor said.

She said Hall could hardly eat and was suffering from kidney problems.

Sekkingstad said he was able to speak with his brother last Sunday night.

“We do our best but it’s not enough to meet their demand. We don’t know for sure. Four of us to start with and when deadline (was) not met one was beheaded. We are kept in the dark. I really don’t know what is happening,” Sekkingstad said.

He appealed to their governments and the Philippines to save them now.

Abu Raami, the designated spokesperson of the Abu Sayyaf who called the Inquirer, said there would be no extension of the 3 p.m. deadline.

He said the captives would be executed at 3 p.m. if the P600 million ransom was not delivered. RAM/rga