DAVAO CITY—The United States’ tag on Philippine communist rebels as terrorists has jeopardized plans by communist party founder Jose Ma. Sison to come home for peace talks with the incoming Duterte administration, according to a member of the rebels’ peace negotiating panel.

Fidel Agcaoili, also spokesperson of the National Democratic Front of the Philippines (NDFP), said Sison, who has been in exile in The Netherlands for 30 years now, might be unable to return to the Philippines for the talks as a result of a recent US State Department report that classified the Communist Party of the Philippines (CPP) and CPP’s armed wing, New People’s Army (NPA), as terrorist organizations.

“Joma (Sison) coming home is now a ticklish issue,” said Agcaoili. The terror classification of CPP and NPA by the US government, he said, “poses a problem.”

Should Sison take a KLM (The Netherlands’ flag carrier) flight, Agcaoili said the communist leader “has to pass by Taipei (capital of Taiwan).”

“If the US intercedes through the Interpol (International Police), then they might present a warrant of arrest against him (Sison) in Taipei,” said Agcaoili. “So everything goes kaput.” 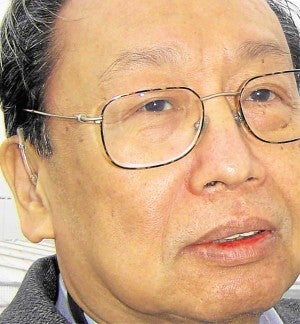 Sison’s homecoming, said Agcaoili, was “an issue that should be discussed seriously.”

“What if he’s (Sison) taken in Taipei and brought straight to Guantanamo (a US camp in Cuba used as jail for terrorists)?” Agcaoili said.

Agcaoili said there had to be a guarantee from the Dutch government, the Norwegian government and the US government to respect Sison’s right to travel.

“But I don’t know if the US will agree to that,” said Agcaoili. “It has always been a bully.”

At the height of the presidential campaign, President-elect Rodrigo Duterte invited Sison to come home for peace talks.

Duterte was Sison’s student at the Lyceum and the incoming President admitted becoming a member of the leftist underground youth group Kabataang Makabayan during martial law.

During his interview with reporters after meeting with Duterte, Agcaoili also defended the NPA practice of collecting so-called revolutionary taxes.

Taxation, he said, was a component of the revolutionary movement.

“Any state has the right to enforce tax,” he added.

“It does not go to the pockets of a few people, like in government,” he said. “It is used in establishing schools, cooperatives and (bringing) medical services.”  Germelina Lacorte and Karlos Manlupig, Inquirer Mindanao