Calif.’s undocumented may be able to buy health insurance by ‘17 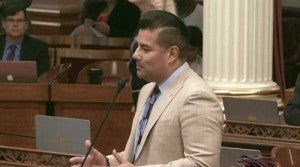 SAN FRANCISCO — As early as next year, undocumented immigrants will be able to buy health insurance on Covered California, the state’s online marketplace. That is, if Uncle Sam gives the state a federal waiver to do so.

In a bipartisan vote of 27 to 8, the California state Senate today approved SB 10, the Health For All Waiver authored by Sen. Ricardo Lara, D-Bell Gardens. Under the proposal, the state will ask for a waiver so that undocumented adults can buy coverage on Covered California.

However, undocumented immigrants would not be able to get any subsidies when making their purchase. An estimated 390,000 immigrants who earn an income too high to qualify for Medi-Cal could purchase health care coverage through this program – if they can afford it.

Sen. Lara introduced the waiver as a result of President Obama’s signature health care legislation, the Affordable Care Act (ACA), which bars undocumented immigrants from purchasing health insurance on the online marketplaces set up by state or federal governments. The ACA subsidizes the costs, making the premiums affordable.

States were, however, given a so-called 1332 waiver option so they could fashion a new coverage system customized for local preferences. Proposed state changes have varied widely, from minor fixes to substantial redirections.

In California, the state with the largest immigrant population, an estimated 3 million adults and children have been left without insurance because of the ACA barrier. Thanks to efforts spearheaded by Lara, nearly 170,000 undocumented children became eligible last month for full health coverage through Medi-Cal, the state’s name for Medicaid, the health insurance program for low-income people.

“It is immoral to discriminate against anyone based on where they were born,” Lara said in a press release after the Senate approved the SB 10 measure today. “This bill presents a historic opportunity for California to become the first state in the nation to request a federal waiver to allow the exchange to sell health insurance to undocumented immigrants.”

Governor Brown, the fiscally conservative leader, is expected to sign the waiver request because no state spending is involved.

“Beyond the important symbolism of inclusion, this proposal will provide a practical benefit for many California families with mixed immigration status, who will be able to buy coverage together, even if some family members are eligible for subsidies and others are not,” noted Anthony Wright, executive director of Health Access California, the statewide health care consumer advocacy coalition.

In seeking the waiver, the state must certify that the proposal will not diminish coverage or affordability on the exchange, and will not add costs for the federal government.

Then the federal Department of Health and Human Services and Department of Treasury have 225 days to make a decision. By expediting state approval of the bill, Lara hopes to have the request considered by the Obama administration before he leaves office.