Artists ponder state of Filipino dance, culture in the diaspora

SAN FRANCISCO – In a “gathering of tribes,” diverse Filipino artists and community members recently came together for a two-day event dubbed “Dialogue on Philippine Dance and Culture in the Diaspora.”

Presented last May 13 and 14 by Kularts, American Center of Philippine Arts (ACPA) and Parangal Dance Company, in partnership with the University of San Francisco (USF) Department of Performing Arts & Social Justice, and led and organized respectively by Alleluia Panis, Herna Cruz-Louie, Eric Solano, June Arellano and Jay Loyola, the event was aimed at creating a space for discussion about the state of dance, arts and culture in the Filipino diaspora.

Kicking off the event was a “Legacy Kamayan Dinner” in honor of outstanding artistic leaders who have significantly contributed and influenced Philippine dance and culture in the U.S. at the Bayanihan Community Center, 1010 Mission Street in San Francisco.

Those present, including a younger generation of artists, bestowed respect and expressed awe for the elders who have made an enormous impact on Philippine arts and culture.

Among the honorees were Florante Aguilar, composer and guitarist originally from Cavite, who is one of the leading champions of Philippine music art forms in the U.S. and international markets with nine albums under his belt. His works advances and popularizes Philippine music through recordings, live concerts, film and theater with the right balance between respect and redefinition of tradition.

Jenny Bawer Young, cultural bearer of Kalinga traditional arts, speaking at the dialogue at USF on May 14, 2016. DARIUS MUNOZ

Rudi C. Soriano was also recognized for his work. Originally from Zamboanga City, he is a former member of the Bayanihan Philippine National Folk Dance Company and founder and artistic director of LIKHA, a Pilipino folk ensemble. His choreographic works have been featured at several SF Ethnic Dance Festivals.

Another honoree was Elenita “Lenny” Mendoza Strobel, Ed.D, born and raised in Pampanga, professor at Sonoma State University, author of several books and journal articles on the process of decolonization and re-indigenization, and founder and director of the Center for Babaylan Studies which seeks to promote all indigenous and spiritual traditions from all parts of the Philippines.

The honorees are all immigrants. This, according to Florante Aguilar, is something that allows artists like him to “bring a very unique perspective.”

“First time immigrants like myself came to the U.S. with our identities fully formed, and always the outsider looking in,” Aguilar said. “We bring with us firsthand knowledge of the culture. Now that we are outside of the Philippines, it actually gives us a better appreciation of its beauty and traditions in a different filter.”

Philippine culture is very rich and diverse, “a jar of inspiration that could be infinitely tapped,” according to Aguilar. But an artist has to “gain firsthand knowledge in order to bring traditional art in a respectful light.”

“You can’t do it from an armchair. If one truly were to champion Philippine arts, you have to have either grown up there or significantly visited the motherland in order to bring the knowledge.” Aguilar said. “You can’t be deriving your art based on someone else’s interpretation. It has to come from you.”

Dance artist Alleluia Panis expressed the importance of honoring “Filipino identity in a society where we are considered second-class citizens.”

“Philippine ‘folkloric’ dance groups have been a mainstay in North America. We can thank Bayanihan dancers who have migrated here and set up their own dance groups. These dance groups served an important cultural function among Filipino Americans,” Panis said. “These activities served as a way to honor Filipino identity.”

Panis also stressed the importance of having a dialogue as a way of bringing up awareness and checking one’s selves with regards to appropriating one’s own culture and the responsibility an artist has in representing it.

“As a colonized people living in the first world, discussion on innovations and cultural appropriation, not just by non-Filipinos but also among Filipinos, is of great importance,” Panis said.

“We must check our selves and ask the question: Do we have the right to do what we want with designs, music, dances, etc. just because we have Filipino ancestry? Are we truly representing cultural forms or a people, or are we simply creating/performing a romanticized story of a particular cultural form or people?”

Panis also emphasized the awareness of giving back to the sources of art and culture that inspires and informs an artist’s works. “How do we give back to the indigenous people who have maintained these precious practices despite colonization and modernity, and who have suffered and continue to suffer under the current times?” Panis posed.

“We are people of 7,107 islands, we have many voices and many ways of getting things done,” Panis said.

SoMa Pilipinas representatives MC Canlas and Bernadette Borja Sy were also present and spoke about the recently approved Filipino Cultural District in the South of Market–a landmark project for the reinstatement and recognition of Filipino history and presence in the Bay Area.

On Saturday, the dialogue on Philippine dance and culture transpired at University of San Francisco’s McLaren Conference Center where artists and community members talked about the art-making process in relation to identity, community and personal perspective, all with a sense of respect and recognition for each other.

The main topics for discussion were creative processes, breaking cultural appropriation, credits, copyrights and ownership and the economics of the arts.

Eric Solano, founder of Parangal Dance Company who had trained under renowned Philippine folk dance authority Ramon Obusan, spoke about the process of bringing work gleaned through research in the Philippines to the stage.

According to Loyola, the Bayanihan Philippine National Folk Dance Company was influential in two aspects of his creative life–as a dancer and choreographer.

“My years of Bayanihan experience and training engraved in me a great awareness of Philippine dance,” Loyola said. “I’ve seen what elements are important in conducting a research, what I have to focus on, what I need to remember.”

This became a springboard for his own works as a choreographer, combining it with his experience of living with the indigenous people, the Tagbanua, of his hometown, Palawan.

“I use Bayanihan’s concept for my choreographic structure. Strong attitude, precision, form and poise are few of the elements I keep as my pattern,” Loyola said. “On the other hand, I permanently keep my works very close to my Tagbanua life experience. It gives more depth to my work, it becomes the soul of the piece as it keeps the connection to my purpose.”

This has culminated in Jay Loyola Dance, a choreographic medium and vocabulary for the creation and interpretation of Philippine Dance. 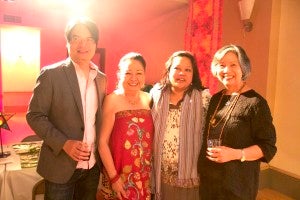 “Jay Loyola Dance vocabulary is figures derived from interlocking two or more regional dance movements into one single phrase. Choreography is developed through the composition of these phrases,” Loyola said. Celebrating a diversity of influences, it is “a distinct Philippine dance style in one entire structure of movements derived from all three major islands: Luzon, Visayas, and Mindanao. Philippine dance encompasses all movements as one style. Jay Loyola Dance style expresses the Filipino soul, breaking boundaries of regionalism, historicism, and temporality.”

Loyola also addressed the issue regarding a true representation of Philippine dance and choreographers being accountable for dance works that they produce, albeit restage. With Philippine folk dance being synonymous with the Bayanihan Dance Company due to the company’s popularity and longevity, most view the dances performed and popularized by the company as “authentic” rather than interpretations of Philippine dance forms.

“It’s disappointing to see other choreographers failing to correct this misconception and sometimes adding to it,” Loyola said. “Philippine dance choreographers should take accountability of the dances they restage.”

Also present at the dialogue were Jenny Bawer Young, cultural bearer of Kalinga traditional arts, music, chants, dances, and a laga (back strap loom weaving) master weaver, who spoke about traditional protocols of asking permission and being allowed to make weaving designs, perform dances and songs, and give or receive a tattoo.

A discussion with the artists and audience followed, joined by Brian Batugo, member of Parangal Dance Company, educator, and founder of Little Manila Dance Co. in Stockton, CA; Rosalie Zerrudo, visual and performing artist, writer, educator from the Philippines, and cultural worker for indigenous rights of the Talaandig and Tiboli in Mindanao. Jonathan Mercado, a hip-hop and Filipino folk dancer, free styled and led the audience and participants to do a series of movement based on traditional Philippine dances.

On the economics of the arts, Lily Karhazzi of Alliance of California Traditional Arts (ACTA) presented the grants programs of ACTA and gave tips on how to come up with specific and strong grant proposals.

Robynn Takayama of SF Arts Commission demystified the grant process and shared insights on what funders are really asking for using SFAC and other government grants guidelines. Desi Danganan of Plinth Agency presented the ins and outs of crowd-funding for a project, and Herna Cruz-Louie, executive director and co-founder of the American Center for Philippine Arts (ACPA), presented creative and successful way to fundraise as well as the pros and cons of fiscal sponsorship compared to having a 501 c3 or non-profit status.