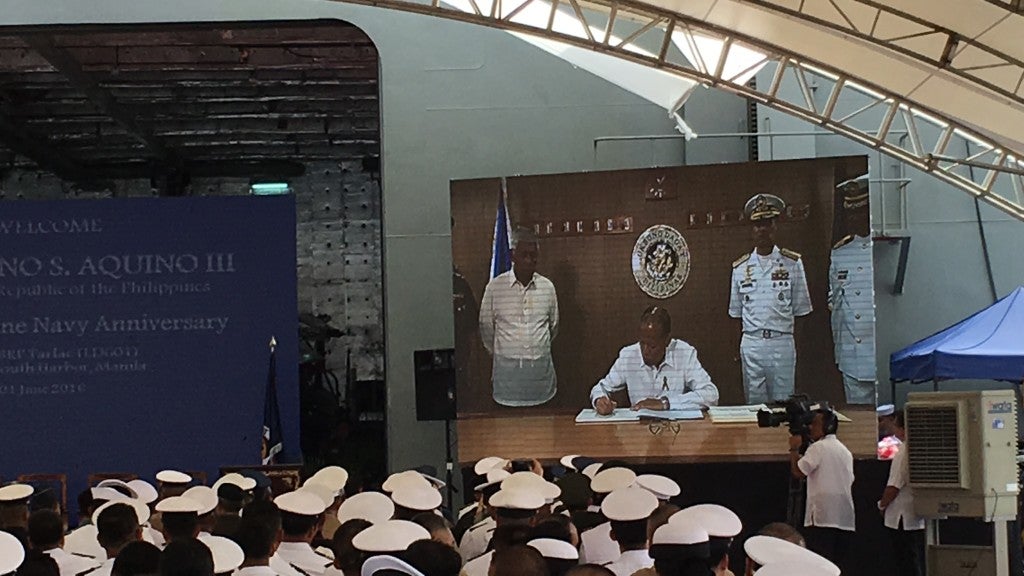 President Aquino, also referred to in the Navy as “Ang Republika ng Pilipinas” to emphasize the position of the President and Commander in Chief as the leader of the republic, was the first dignitary to sign the guest book of the BRP Tarlac, the largest ship in the Philippine Navy fleet. NIKKO DIZON

“It is our hope that this ship shall enable all of you to be of better service to our people. Smooth sailing,” President Aquino wrote on the ship’s guest book.

In the Navy, the President and Commander in Chief is referred to as “Ang Republika ng Pilipinas,” literally “the Republic of the Philippines,” signifying the importance of his role as the country’s leader.

The President graced the 118th anniversary of the Navy, his last major military event as commander-in-chief before he steps down from office at noon of June 30.  He is completing a six year term that is marked by great strides in the Armed Forces of the Philippines (AFP), particularly a push in the modernization of assets to give the military a minimum defense capability from being the weakest in Southeast Asia.

The AFP now has to guard the country’s territorial waters as China continues to expand in the South China Sea, staking claim on nearly the entire body of water.

The BRP Tarlac, a 7,200-ton brand new Strategic Sealift Vessel (SSV), was built in Indonesia for P1.9 billion. Another SSV will be delivered to the Navy next year.  SFM

Amid ‘draft dodger’ issue, Thirdy expresses respect for the PBA