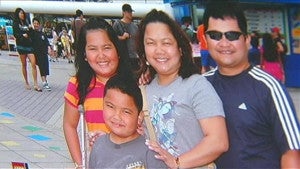 SAN FRANCISCO – A jury found that the life of one of the five women killed three years ago in a limousine fire was worth $6.5 million, but her widower won’t be able to collect that money.

Aldrin Geronga, widower of Felomina “Fyla” Geronga, 43, had sued Ford Motor Co. for up to $37 million. The jury, however, found that Ford was not responsible for the fatal fire that destroyed the limousine carrying a wedding party on the San Mateo Bridge in Foster City, California on Saturday, May 4, 2013. The Gerongas have two teenage children.

Jurors did decide that Limo Stop, the San Jose owner of the limousine, was to blame for the fire. Investigators blamed the fire on a “catastrophic failure” of the car’s suspension system: The vehicle’s drive shaft rubbed on its undercarriage, causing sparks and friction that started the fire. Ford’s lawyer said Limo Stop’s neglect and abuse of the vehicle for causing a suspension system failure that led to the fire.

Geronga has already settled with Limo Stop for an undisclosed amount, said his attorney, William Smith. The survivors, as well as the families of the other victims who died also have settled with the other defendants except Ford. Geronga will appeal the jury’s Ford decision, Smith told the press.

Five women died when they were trapped in the limo that caught fire as they were traveling the westbound side of the San Mateo-Hayward Bridge. Four women and the driver were able to escape.

But five passengers were trapped and died: newlywed Neriza Fojas, 31, of Fresno; Jennifer “Jenni” Balon, 39, of Dublin; Felomina “Fyla” Geronga, 43, of Alameda; Michelle Estrera, 35, of Fresno; and Anna “Beneth” Alcantara, 46, of San Lorenzo, California. The women, all nurses, were going to a party in Foster City to celebrate Fojas’ wedding.

Smith argued that Ford knew that converted Lincoln Town Cars were susceptible to suspension problems and did nothing to repair them or warn consumers. Geronga is still convinced Ford knew about the vehicle’s susceptibility to failure but did nothing about it.

The verdict came after about 3½ days of deliberations by a jury of 10 men and two women.