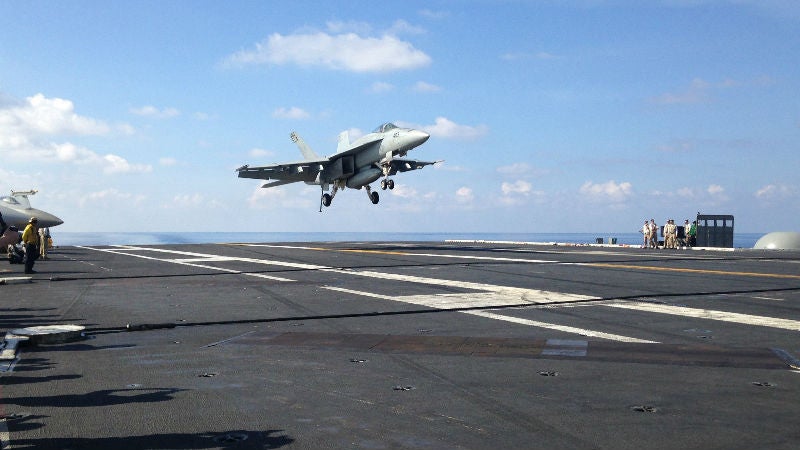 In this Friday, April 15, 2016 file photo, an FA-18 jet fighter lands on the USS John C. Stennis aircraft carrier in the South China Sea while U.S. Defense Secretary Ash Carter visited the aircraft carrier during a trip to the region. American ships and fighter jets maneuvering across the South China Sea and the Sea of Japan represent the “new normal” in U.S.-Pacific relations despite rising tensions with China and Russia. U.S. moves in recent months have led to angry protests from Beijing and Moscow. They say the Obama administration is fueling unrest in the Asia Pacific, and is conducting for illegal and unsafe transit in the region. (AP Photo/Lolita C. Baldor, File)

WASHINGTON—American ships and fighter jets maneuvering across the South China Sea and the Sea of Japan represent the “new normal” in US-Pacific relations despite rising tensions with China and Moscow.

US moves in recent months have led to angry protests from China and Russia, which contend the Obama administration is fueling unrest in the Asia-Pacific and conducting illegal and unsafe transit in the region.

US military leaders defend the operations and say they will continue to exercise freedom of navigation, and may do so more frequently as time goes on.

The escalating rhetoric reflects efforts by China and Russia to show military superiority in an increasingly crowded and competitive part of the world.

And it sets up a tense game of political brinksmanship as leaders from the two countries and the United States thrust and parry across the military and diplomatic fields of play.

The military maneuvers have shadowed US President Barack Obama’s “pivot to Asia,” a decision early in his tenure to try to focus the relationship with Pacific partners on economics and trade.

“We’re at a moment when China, Iran and Russia are all testing us, engaging in reckless behavior and forcing policy makers with the question of how far we push and when,” said Derek Chollet, a former assistant defense secretary for international affairs and now a senior adviser at the German Marshall Fund.

“We’re for freedom of navigation and following the rules, and to an extent we are pushing back against changing the rules,” he said.

Adm. John Richardson, chief of US naval operations, said that for the first time in 25 years, the United States was facing competition for maritime superiority as China and Russia build up their navies.

China’s island development in the South China Sea has inflamed regional tensions, including with nations that have competing claims to the land formations.

Most fear that Beijing, which has built airfields and placed weapons systems on the man-made islands, will use the construction to extend its military reach and perhaps try to restrict navigation.

Three times in the past seven months, US warships deliberately have sailed close to one of those islands to exercise freedom of navigation and challenge the claims.

In response, China has deployed fighter jets and ships to track and warn off the American ships, and accused the United States of provocative action.

Twice this year, US Defense Secretary Ash Carter has flown to US aircraft carriers in the South China Sea with reporters, sending a message that the United States will not cede navigational rights. He plans to return to the area next week for an annual Asian national security conference.

“China has taken some expansive and unprecedented actions in the South China Sea, pressing excessive maritime claims contrary to international law,” Carter said on Friday during a speech to graduates at US Naval Academy.

“The result is that China’s actions could erect a Great Wall of self-isolation, as countries across the region—allies, partners, and the unaligned—are voicing concerns publicly and privately, at the highest levels,” he said.

Similarly, Russian attack planes buzzed a US Navy warship in international waters in the Baltic Sea last month, and last week Moscow lodged a formal protest about a US reconnaissance flight over the Sea of Japan.

The United States says its missions are meant to underscore its and others’ rights to traverse the region freely and to block efforts by any nation to unlawfully extend their boundaries or territorial rights.

“To the degree that we could advocate more strongly, we need to do enough of these things so that advocacy is well understood,” Richardson said in an Associated Press (AP) interview. “Certainly if you wanted to dial those up in frequency, well I think that we can support that.”

The United States, he said, is establishing “a new normal level of activity or interaction” that comes with Russia’s and China’s “return to great power competition.”

Richardson noted that freedom of navigation operations happen hundreds of times a year in the backyards of friends and foes.

“Even though there’s a tremendous amount of visibility on the South China Sea right now, it is important to keep those in context,” he said. “We do these around the world against a lot of these excessive claims.”

Law of the Sea

Under the Law of the Sea, a country can claim up to 22 kilometers beyond its coastline. In some cases, countries try to claim more than that.

In other cases, countries try to restrict what others can do within the 360-kilometer exclusive economic zone (EEZ) that’s allowed under international law. For example, they may require advance notice of a flight or ship passage within that zone or prohibit certain military activities there.

China claims almost all of the South China Sea, including waters within the EEZ of its smaller neighbors in the region.

Brunei, Malaysia, the Philippines, Vietnam and Taiwan have competing claims in the South China Sea.

Without military muscle to defend its territory, the Philippines has brought its territorial dispute with China to the United Nations Permanent Court of Arbitration in The Hague for resolution. China has ignored the proceedings, but the court is expected to hand down a ruling in the coming weeks.

The Pentagon releases an annual report that lists the countries where the United States has conducted freedom of navigation operations, but includes no details.

US military officials said that at least 80 percent were done by ships, but US aircraft also conducted flights to challenge excessive airspace claims.

The most frequent US operations are in the narrow Strait of Hormuz, where hundreds of times a year ships pass through territorial waters claimed by Iran and Oman.

Both countries try to restrict movement through the strait, but international law allows innocent passage.

The Iranian military often hails US ships and tells them to leave. The two sides essentially follow a script, as the US ship continues on its way.

In other places around the globe, including portions of India or large stretches of the South American coast, US ships routinely sail within claimed territorial waters or refuse to provide advance requests for transit. Often, the operations go unnoticed or trigger no reaction or protest.

In some cases, US officials said, countries are only aware of the operation after the Pentagon releases the annual report.

According to the 2015 report, the United States formally conducted freedom of navigation operations as a way of challenging excessive claims made by 13 countries during the budget year ending Sept. 30. AP