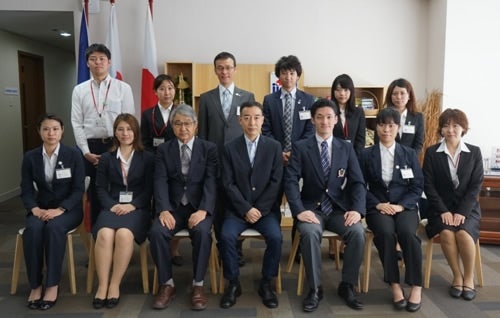 The latest batch of Jica volunteers. PHOTO FROM JICA WEBSITE

TOKYO—By volunteering in the Philippines in their youth, these Japanese folk wanted to introduce positive change to that strange tropical land. Upon coming home, however, they found that the experience had changed them for the better, too.

Men and women who took part in the Japan Overseas Cooperation Volunteers (JOCV) program of the Japan International Cooperation Agency (Jica) spoke recently about their work in the Philippines, where they trained schoolteachers, planted crops or rebuilt a community.

They described the experience to Jica as perspective-changing and rich with meaning. It also made them realize that Filipinos are not so different from the Japanese, after all.

“I discovered that people from another culture or background may be different, but we are more or less the same human beings,” said Sumiyo Fukuda, who helped train high school science teachers in Bicol from 1994 to 1997.

A member of JOCV’s 95th batch, she said her travels in the Philippines “became opportunities for me to develop mutual trust” with the Filipino locals.

Another JOCV graduate said his Philippine deployment had made a “great impact” on his life.

“As a volunteer in a foreign country, I got to see and understand my country, Japan, and the Japanese people [from] a different angle,” said Osamu Nakagaki, who came to the Philippines in 1970.

Together with fellow volunteers, he introduced a mango plant project in northern Luzon. The project is now the famed La Union Botanical Garden.

In April, Jica dispatched its 163rd batch composed of 12 Japanese volunteers in the Philippines in what the agency called a move to “further strengthen the strategic development cooperation between Japan and the Philippines.”

Since 1965, Jica has sent out more than 48,000 volunteers across 87 countries, where they typically stay for two years. This year, JOCV celebrated its 50th year.

In the Philippines, the Japanese aid agency has deployed more than 1,500 volunteers to date.

At present, there are 47 Japanese volunteers working in the Philippines, most of them in the Visayas region, according to Jin Wakabayashi, director of Jica’s Southeast Asia and Pacific department.

A little more than half of the group is male. “They are usually in their early 20s to late 30s,” he told the Inquirer in an interview.

Jica has a separate program for elderly volunteers.

The volunteers are deployed across a diverse range of sectors, from education to community development, from agriculture to design and manufacturing and support from persons with disability, and from tourism to heritage conservation, Wakabayashi said.

Except for the provinces of Ifugao, Camarines Sur, Albay and Sorsogon, all the current volunteers are working in communities in the Visayas. They are deployed in Aklan, Antique, Capiz, Iloilo, Biliran, Leyte, Negros Occidental, Negros Oriental, Bohol and Siquijor.

“The program dispatches eager Japanese citizens who wish to participate in assisting developing countries who also have the adequate skills, knowledge and experience to answer the calls for assistance from their governments,” it said.

Besides promoting the economic, social development and reconstruction of these nations, and deepening international goodwill, the objectives include developing “international perspectives” and giving back the experience to the Japanese community, according to Jica.

That last objective seems to have been met, based on the experiences of some of the Japanese volunteers sent to the Philippines.

“From working with communities in the Philippines, I learned the value of a human being,” said Hidezaku Kumano, a member of the 1966 batch of JOCV, which was only second to the pioneers.

As a young man, Hidezaku had helped cultivate 12,160 mulberry trees in the tiny farming town of La Trinidad, Benguet.

While working to overcome language and cultural barriers, the Japanese said he learned that he could “accept diversity without losing my core ideals.”

“I also remember the friendship with the owners of the house I stayed in during my deployment. They passed away already but it was great honor and happiness for me to keep such good relationships,” he said.

Another volunteer said he discovered the importance of being persistent in achieving one’s goals.

“I learned from my JOCV experience that we can find the answers to challenges if we don’t give up,” said Hisashi Tanaka, who helped introduce new breeding techniques for carabao or water buffalo in Davao Oriental in the early 1980s.

On the other hand, Mariko Ozaki, a relatively fresh JOCV graduate from the 2010 batch, said her time in the Philippines imbued her with new appreciation for international cooperation in spite of cultural differences.

“I learned that everything takes time in a developing country,” she said.

“What’s important is to help people establish good relations with each other so they can act in harmony and solidarity,” said Ozaki, who worked with a local cooperative in Tacloban City and later supported Japan’s JOCV program for rural communities.

The JOCV program is only one of the ways Japan has nurtured a close relationship with the Philippines after the two countries’ bitter and acrimonious episode during World War II.

Today, the ties that bind Japanese and Filipino people have never been tighter.

Japan, through Jica, is the biggest donor of ODA to the Philippines in the form of technical assistance or grants. It is also the largest trading partner and largest source of investment for the Philippines, according to the country’s Ministry of Foreign Affairs.

Some 200,000 Filipinos live in Japan, while there are about 19,000 Japanese nationals in the Philippines.

‘Have faith, Duterte will learn diplomacy’