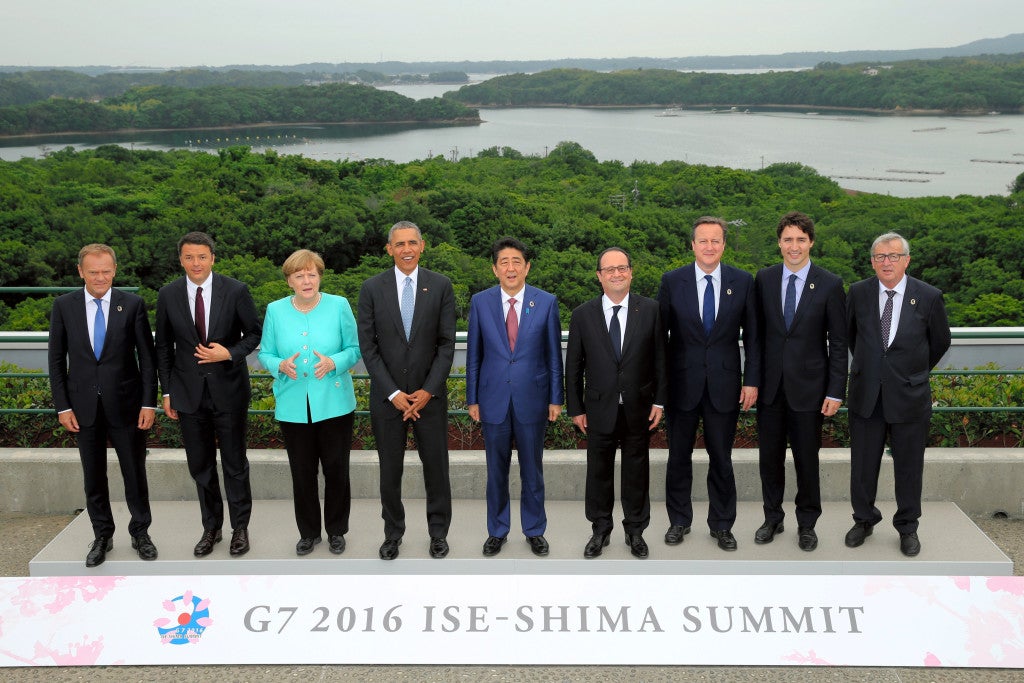 ISE CITY, Japan—With a keen eye on the Philippines’ legal battle with China over territory in the South China Sea, the leaders of the Group of Seven (G7) advanced democracies have agreed to send a strong message on the importance of international law in resolving maritime disputes in Asia.

Though no individual countries were mentioned, the contents of their declaration at the close of an annual summit appeared to be directed at China.

China’s claim to nearly the entire South China Sea and militarization of the region has angered some of its Southeast Asian neighbors and sparked fears over threats to freedom of navigation in the strategic waterway.

“We are concerned about the situation in the East and South China Seas, and emphasize the fundamental importance of peaceful management and settlement of disputes,” the G7 leaders said.

The leaders—representing the United States, Japan, Britain, France, Germany, Italy and Canada—said settlement of disputes should be “peaceful” and “freedom of navigation and overflight” should be respected.

They said claims in the East and South China Seas should be made based on international law and countries should refrain from “unilateral actions that could increase tensions” while also avoiding “force or coercion in trying to drive their claims.”

They also stressed that judicial means, “including arbitration,” should be used.

That call came ahead of a ruling expected within weeks on China’s claims brought by the Philippines to the United Nations Permanent Court of Arbitration in The Hague. China has said it does not recognize the case.

Speaking to reporters on Friday, Japanese Prime Minister Shinzo Abe stressed the importance of the rule of law and mentioned the Philippine case as a focal point.

“As for the Philippines, soon the decision in its arbitration case will be announced. From the standpoint of the rule of law, it’s important that respective countries clearly demonstrate their stance [on this],” Abe said.

Before Friday’s declaration, the G7 leaders said they should pay close attention to the Philippine case, with some of them stating that they should “raise their voice on this,” if necessary.

On the first day of the two-day G7 Ise-Shima Summit, the seven heads of state arrived at a decision to send a bold signal emphasizing international law in disputes in the East and South China Seas, a Japanese spokesperson said.

“On the expected judgment by the [UN] court of the issue of the oceans, G7 should pay keen attention on this, and, if necessary, will raise their voice on this,” said Yasuhisa Kawamura, press secretary of Japan’s Ministry of Foreign Affairs.

At a briefing late Thursday, Kawamura relayed to the press the outcome of the closed session among the G7 leaders who had gathered for their annual meeting at the Shima Kanko Hotel nestled in the picturesque Ise-Shima region.

“They agreed on the importance of observance of international law, rule and principle. This point should be sent out as a clear signal to the rest of the world. That is G7’s expected role,” Kawamura said.

He said the G7 leaders also recognized concerns about the people’s freedom of navigation and overflight, which, he added, were personally important to the heads of state.

Asked to elaborate on what conditions would necessitate raising the G7 bloc’s voice, Kawamura clarified that these words were only a “comment” by the participants, and were not a wrap-up conclusion.

Though not a member of G7, China, the world’s second-largest economy, cast a shadow over the talks with its increasingly aggressive posture in the East and South China Seas.

China is locked in dispute with G7 host Japan over ownership of a group of uninhabited islands in the East China Sea known to the Japanese as the Senkakus and to the Chinese as Diaoyus.

To bolster its claim to the islands, China has declared an air defense identification zone in the East China Sea, which Japan, the United States and their allies have refused to recognize.

China also claims almost all of the 3.5-million-square-kilometer South China Sea, including waters within the exclusive economic zones (EEZ) of its smaller neighbors in the region.

Brunei, Malaysia, the Philippines, Vietnam and Taiwan have overlapping claims in the South China Sea, crisscrossed by sea-lanes where $5 trillion in global trade passes every year and home to islets, reefs and atolls believed to be sitting atop vast energy reserves.

Asserting its sweeping claims, China has built artificial islands on seven reefs in the Spratly archipelago and provided at least three of them with ports, radars and airstrips that could receive military planes.

Without military muscle to defend its territory, the Philippines has challenged China’s claims, bringing a law-of-the-sea case in the UN arbitral court in 2013 after China grabbed Panatag Shoal (international name: Scarborough Shoal) in 2012.

Rich in resources and a traditional fishing ground for Filipinos, Panatag is located just off the main Philippine island of Luzon, well within the country’s EEZ, and more than 1,000 km from the nearest Chinese landmass, Hainan.

China has refused to take part in the UN court proceedings, accusing the Philippines of “political provocation” in seeking international arbitration.

Japan and the United States, whose leader, President Barack Obama, is present at the G7 meeting, have long expressed support for the Philippine decision to pursue a case against China, but both are careful not to comment on its legal merits.

Pressed to answer yes or no to a question on whether G7 would take a leadership role in the maritime disputes involving China, Kawamura said the issue was not so black and white.

“Diplomacy is sometimes not a yes or no type of interactions,” he said. “Let me put it this way: They (G7 leaders) recognized the concerns, and they recognized the necessity to address it, and they agreed to a principled approach to the issues on the oceans.”

Kawamura cited another comment by the world leaders that G7 might need to cooperate with members of the Association of Southeast Asian Nations and possibly bring up the issue at the upcoming East Asia Summit in September. With a report from AFP