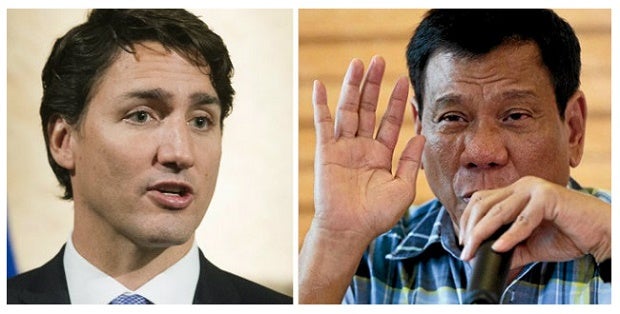 DAVAO CITY—Canadian Prime Minister Justin Trudeau became the second world leader to congratulate presumptive President-elect Rodrigo Duterte as the two leaders talked to each other on the phone.

Duterte said on Thursday that their talk on Tuesday, which lasted for about nine minutes, touched on various issues such as his adherence to the United Nations Universal Declaration on Human Rights and the condition of  Filipinos in Canada.

“It was a civil one. [We talked about] human rights, the Universal Declaration of Human Rights. I said, ‘Fine. I’ll follow it’.”

“I said that we are partners. May we remain to be partners for all time. I am aware that many Filipinos are working there with work permits. Some of them are immigrants. And I am happy that they have found protection even in the labor laws,” he said.

Duterte joked that he did not ask about Trudeau’s health condition—a topic which irked him during the press conference.

“Hindi ko natanong yung (I didn’t ask about his) state of health,” he jested.

Duterte also apologized for the death of Canadian national John Ridsdel in the hands of the terrorist Abu Sayyaf Group last April, promising that he will bring Ridsdel’s killers to justice.

“I said, ‘Mr. Prime Minister, please accept my apology for the incident. I am very sorry for the incident that happened which resulted in the killing of your national and we will try our very best to see to it that nothing of this nature will happen again.”

“And you are rest assured that when the time comes, we will be able to apprehend the criminals and bring them to justice…There will be a time when I say … surrender and release all hostages,” the incoming President said.

The severed head of 68-year-old Ridsdel was found near the police station in Jolo, Sulu on April 25. He was held captive by the ASG since September 2015.

The ASG demanded P300 million for Ridsdel and his three other companions—fellow Canadian Robert Hall, Norwegian Kjartan Sekkingstad and Filipino Maritess Flor, who remain captives of the bandit group.

READ: Abu hostages beg Duterte to save them

An Inquirer source said that the bandit group turned down a P20 million offer raised for Ridsdel.

Trudeau said that the death of Ridsdel was “an act of cold-blooded murder.”

“Responsibility rests with the terrorist group who took him hostage,” the prime minister said.

Authorities said that the group is still holding more than 20 foreigners. CDG/rga