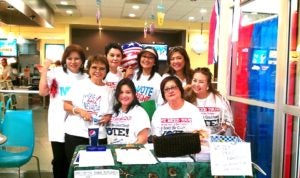 These are among the findings of a new national survey conducted by Asian Americans Advancing Justice, AAPIData and the Asian and Pacific Islander American Vote initiative.

The survey, which polled 1,200 registered voters via telephone around the US, aimed to reach out to various API groups—including Chinese, Filipino, Japanese, Korean, and Vietnamese populations—to better understand their views and the issues they care about during a crucial election year.

Entitled “Inclusion, Not Exclusion,” the report “fulfills an important need to understand our community and the American electorate,” said Karthick Ramakrishnan, director of AAPIData, in a press webinar. “It is also the first time that we have in-language national polling data on where Asian Americans stand on issues and candidates.”

Since the 1980s, the Asian American electorate has doubled from 2 to 3.9 million, and the demographic has nearly tripled to 6 percent of the total US population. According to Asian Americans Advancing Justice (AAJC), it is projected that one out of every 10 Americans in the next year will be Asian.

“Our population is increasingly overlooked by political parties and organizations,” said Mee Moua, president of AAJC. “Our community has a sense of policies and issues which affect their lives and potential opportunities for their families. We are not getting our voices loud enough on issues that really matter.”

With the rise of Asian American populations nationwide, voters are also increasingly shifting in party identification, according to the survey. Of those polled, 47 percent identify as Democrat, a 12-point increase from 35 percent in 2012, while 15 percent were named Republican.

Among Filipino Americans, 54 percent identify as Democrat, with 16 percent of those polled Republican and 27 percent who chose not to identify.

“The Democratic advantage is strongest on the environment, racial profiling, education, social security, and immigration reform, and remains statistically significant on nearly all issues,” the survey reads.

Voter enthusiasm is also significantly higher this election year than it was in 2014. Asian Americans have been increasingly more vocal about the issues they care about and the candidates who, in turn, care about them.

Support for President Barack Obama was wide across the board, with two-thirds (68 percent) in favor. As for the new candidates, Hillary Clinton received the highest net favorability (62 percent total, 59 percent of Filipinos), while a high number of voters had no opinion of Bernie Sanders.

The shift also reflects a steady decline of those who did not previously identify with a party.

“The data seems to suggest a crystallizing of attitudes of those who were learning towards the Democratic Party before the last election,” said Ramakrishnan. “An exclusionary, anti-immigrant rhetoric gives the image of a party that is not welcoming to others.”

The evidence indicates that API party voters, including Independents, do not favor candidates with such exclusionary promises; 41 percent of the voters (42 percent of Filipinos) said they would generally drop support for candidates who have a strong anti-immigrant, anti-Muslim rhetoric.

“It shows that Asian Americans care about a variety of issues, including education, health care, jobs/the economy, retirement, and the threat of terrorist attacks,” said Ramakrishnan. “They also give the upper hand to Democrats in nearly all of these issues, with equal support to Republican and Democrat views on terrorism threats.”

The survey also highlights the importance of young API voters—millennials between 18 to 34—as a key demographic to reach, with strong views that will shape American politics for the future.

“In 2014, voter turnout was low for most minority communities. This year, over half of APIs are more enthusiastic, compared to prior elections,” said Ramakrishnan. “Each presidential election we add at least a million registered voters. Even though there are investments, it isn’t enough outreach to reach out to our whole community.”

The data also suggests that investments in voter outreach seem to be just keeping pace with the rapidly growing population, while the overall increase in contact among racial groups still remains to be seen.

“We hope to provide more opportunities to increase civic engagement, especially to engage voters who remain mostly undecided, or who feel like the parties or candidates don’t address their issues at all,” said Christine Chen, executive director with Asian and Pacific Islander American Vote. “We are working with local organizations to mobilize, build trust, change attitudes and break voting barriers within our community, through educational efforts, personal calls, and providing in-language materials and resources.”

Added Moua, “We hope that the survey will be a tool to help inform our community on where they stand on issues, and to educate and unify our members both on candidates and local political parties. Especially in a presidential year, what matters to the people at the top of the ticket should also reflect those on the bottom. I believe that there is ample opportunity to do outreach, and to fully invest in the API community.”