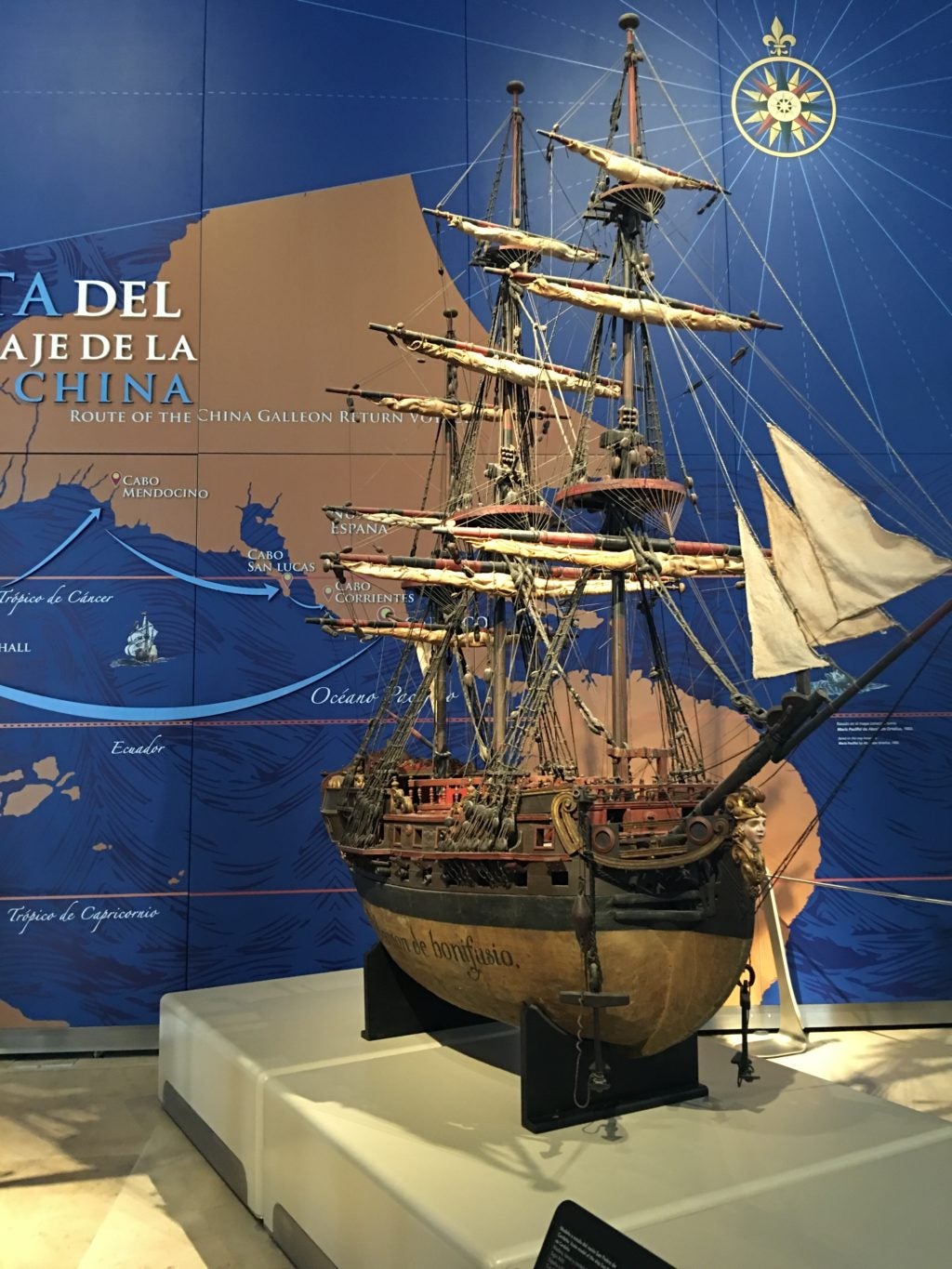 A MINIATURE galleon is one of the items at the Museo Internacional del Barroco in Puebla City, Mexico, which prominently features Philippine colonial history and its role in the galleon trade. TARRA QUISMUNDO

PUEBLA CITY, Mexico—In this historic city that draws throngs of tourists and pilgrims alike, a piece of the Philippines has taken center stage.

Philippine colonial history and its role in the spread of the baroque architecture and style are on prominent display at the Museo Internacional del Barroco (MIB), a state-of-the-art museum that stands out as a modern shrine to one of the world’s most celebrated periods in art and culture.

An exhibit on the galleon trade, which plied the trans-Pacific route between Manila and Acapulco for 250 years, is among the inaugural displays at the museum that opened in February this year, introducing the long history of ties between the Philippines and Mexico to a new generation.

Titled “Tornaviaje (Return Voyage): The China Galleon and the Baroque in Mexico,” the exhibit features artifacts from the Manila-Acapulco maritime trade from 1565 to 1815. The exchange is commonly referred to in Mexico as the Nao de China, as most products traded—porcelain, ivory, silk, among other goods—were from Chinese merchants.

As it is described at the exhibit hall, the galleon’s return voyage from Manila to Mexico, then called New Spain, “was a naval and cultural feat that linked the civilizations of the Asia-Pacific and the New World, and turned Spain into a global power that dominated territories on diverse continents.”

The trade is largely credited for bringing the baroque aesthetic—the extravagant, intricate style of European art, architecture, literature and music deeply influenced by the Catholic Church—across the seas, lending to its evolution.

“The Return Voyage turned Mexico into a bridge linking many countries. Indigenous and European cultures melded with Asian traditions, which gave rise to multiple baroque identities,” read the introduction to the exhibit.

The exhibit, designed by some of Mexico’s most prominent museographers and designers Miguel Angel Fernandez and Ricardo Garcia, gives emphasis to Manila as the starting point of trade, tracing the Philippines’ history from the moment it was so named.

Garcia, who designed the Tornaviaje’s installations in line with the museum’s overall curve theme, said the exhibit took a year to finish. The temporary exhibit will be on display until the middle of the year.

“This just shows the mutual recognition of each others’ relations. Our cultural ties is now going to the surface because of this special exhibition dedicated to us,” said former Sen. Edgardo Angara, who visited the museum on May 14.

The baroque museum is of special interest to Angara, as he is at the head of a private sector initiative to build the Manila-Acapulco Galleon Museum, a first-of-its-kind international museum in Manila.

“That (exhibit) brings us to the baroque orbit,” he said in an interview, describing that period in history as a “reaction to the perfection of Renaissance.”  Baroque derives from the Portuguese word “barroco,” which means “imperfect pearl.”

The exhibit, which welcomes visitors at the ground floor of the flowing two-story building, begins with an imposing map of the galleon trade route, with a sizeable (yet not to scale) replica of the 16th-century ship used at the time.

The wall to its right, just at the entrance of the exhibit, features an audiovisual display of goods traded between the seas, identifying the source of particular goods. For instance, rice and cinnamon came from the Philippines.

At the doorstep of the exhibit is a map of the Philippines, with its major island groups labeled: Región de Luzon, Región de las Bisayas, Región de Mindanao. It also explains the origin of the names Manila and Philippines.

The exhibit features Portuguese navigator Ferdinand Magellan’s three-year expedition around the world, which culminated in his landing in Cebu in 1521.

The display also looks back at “The Taking of Manila,” explaining how navigator Miguel Lopez de Legazpi, one of the Spanish Crown’s lieutenants in its oriental conquest, had seized the city from Rajah Sulayman. 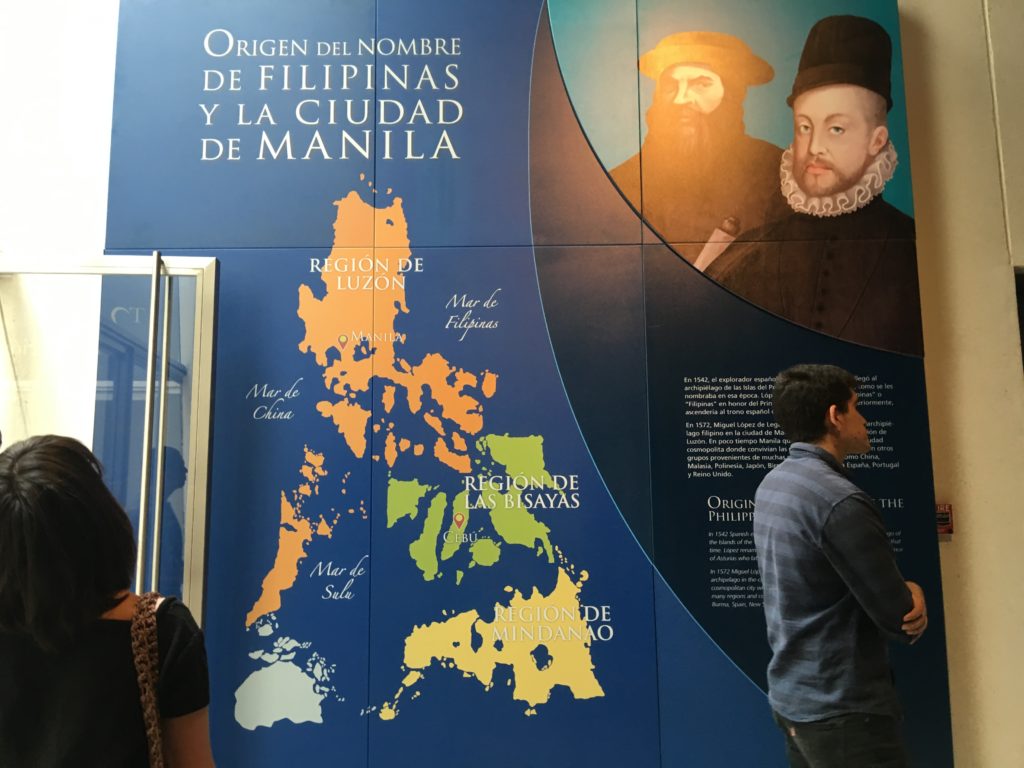 The map of the Philippines as showcased at the Museo Internacional del Barroco in Puebla City, Mexico.  TARRA QUISMUNDO

Another wall features the indigenous ships that sailed the seas at the time of the galleon trade, among them India’s manché, China’s sampán and tungul, and the Philippines’ parao.

Centuries-old maps and navigational books are also on display, along with navigational equipment, art, books, furniture and several religious items from the time of the trade.

Among the most notable is a 1609 print of “Sucesos de las Islas Filipinas (Events in the Philippine Islands)” by Spanish historian Antonio de Morga, which was borrowed from Puebla’s Biblioteca Palafoxiana. The book is considered a seminal piece on Spanish colonial history in the Philippines.

Two other books on Philippine history, both by Jesuit priest Pedro Murillo Velarde, are on display at the museum: “Historia de la Provincia de Philipinas de la Compañia de Jesus (The History of the Province of the Philippines of the Jesuits)” printed in 1749, and the “Geographica Historica de las Islas Philipinas, del Africa y de sus Islas Adyacentes (Historical Geography of the Philippine Islands, Africa and their Adjacent Islands),” printed in 1752.

Another interesting display is how the galleon trade facilitated a linguistic exchange across the Pacific. While several words of Spanish origin remain in daily Filipino conversation, it is little known that the Tagalog word “palapa,” or thatched roofing made of dried palm leaves, is used as is in Mexico.

Even around Puebla, several posters were seen promoting palapa installation in the city.

The exhibit also featured several pieces of centuries-old Manton de Manila (Manila shawl), among goods that crossed the Pacific during the galleon trade.

While most artifacts on display were sourced from Mexican and Spanish libraries and museums, the Philippines has its own contribution to the exhibit: the images of St. Agnes and St. Luke, carved in the 18th century out of molave.

The Philippine-made images were loaned from San Agustin Church in Manila, as facilitated by Angara.

“Initially, they refused to lend the treasures,” Angara said of the Augustinians in charge of taking care of the images.

“But I talked to them and explained to them, ‘Do not to be afraid about loaning these treasures because they are insured, shipped by an accredited shipping company, and if you want, you can accompany your collection.’ Then they understood,” Angara said.

He emphasized the importance of Puebla City as the seat of baroque culture during the Spanish colonial era, and its undeniable similarities with the Philippines. The design of Puebla’s many churches for

instance are strikingly parallel to that of colonial churches in the Philippines, including the wide-open plazas across the religious buildings.

Puebla’s streets are also reminiscent of the heritage city of Vigan in Ilocos Sur, albeit more colorful.

As renowned Mexican architect Jorge Loyzaga put it, the Philippines’ influence on Mexican culture is undeniable, even while Mexicans may not realize it.

“In all time, all places, you see the influence,” said Loyzaga, a frequent traveler to the Philippines who has built his own “bahay na bato” with capiz windows and all in Mexico.

Angara is looking at the MIB as an inspiration in designing exhibits for the galleon museum in Manila, slated for soft-opening in July.

He hopes to borrow the museum’s technology in encasing the artifacts, particularly its humidity and temperature control.

Garcia designed the installations, while the museum itself—a striking white building of overlapping walls surrounded by pools of still water—was designed by renowned Japanese architect Toyo Ito. The museum has drawn 185,000 visitors since it opened in February.

Angara is working with an international ensemble of designers, engineers, architects and historians from the Philippines, Mexico and Spain to build the Manila-Acapulco Galleon Museum, currently under construction at the SM Mall of Asia Complex by the Manila Bay in Pasay City.

The museum will feature a historically accurate replica of a galleon used during the colonial-era trade, its design based on construction plans detailed in 18th-century manuscripts.