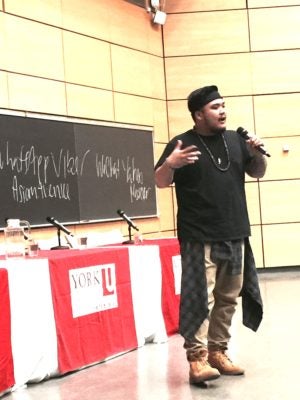 TORONTO, Ontario — Filipino-Canadian Catholic high school students from Toronto trooped to Vari Lecture Hall A in York University and were treated to a unique discourse on the complex issues of community and ethnic identity through the medium of art.

“Filipino Voices in the Arts and Academia” on May 16 was no ordinary lecture, as youthful Filipino Canadian artists and scholars dazzled with their presentations addressing the questions such as, “What does it mean to be Filipino in Canada?” and “How do parents and their kids think differently about this question?” and “How are these questions tackled by writers, artists and researchers?”

Keynote speakers Jennilee Austria, a novelist, journalist and settlement worker and Shirley Camia, broadcaster, producer and poet, shared the microphone and their experience of carving out their identities in Canadian print media (Jennilee) and broadcast journalism (Shirley). 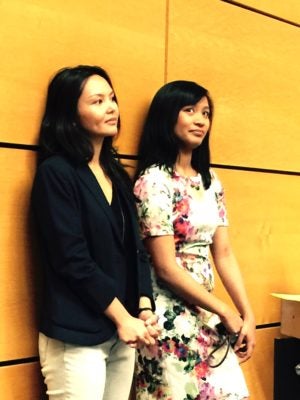 Dr. Patrick Alcedo, associate professor and graduate program Director in the Department of Dance at York University, traced the roots of the Filipino festival Ati-Atihan as a way of honoring the ancestors, the Atis of Aklan, and how it morphed into a fiesta celebrating the Santo Nino de Aklan.  Dr. Alcedo, assisted by one of his students, performed the “maglalatik” (dance with coconut shells) to end his presentation.

Dr. Philip Kelly, professor of Geography at York University and director of the York Center for Asian Research, spoke about Filipino Identity and Second Generation Outcomes in Canada.  His recent projects include the Filipino Youth Transitions in Canada, the Halton Pinoy Project and the Canada-Philippines Alternative Transnational Economies (ATE) project.  A dual citizen of Canada and the UK (he was born in Liverpool), Kelly is an “honorary citizen of Tanza, Cavite.” 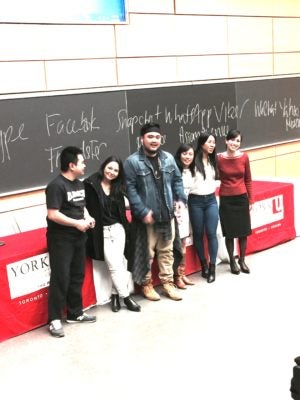 She explores how family love among OFWs translates into caring and emotional labor via boxes of canned goods and clothing through the ubiquitous balikbayan boxes, and how social media like Facebook, Viber, Snapchat and WhatsApp help family members keep tabs on one another.

Patrick de Belen brought the house down with his performance of “Thin, Hyphenated Line,” his cutting social commentary disguised as poetry and delivered as rap.  The Toronto-based poet, performer and educator received the first ever Poet of Honor award at YouthCanSlam–Canada’s Youth Poetry Festival.

De Belen won on the basis of his “dual talents as a poet of remarkable ability and an educator of enduring devotion, passion and intelligence.”  De Belen was a national slam champion at the 2012 Canadian Festival of Spoken Word and he has been “a performer of note on such platforms as CBC, TED, NEXE and others.” 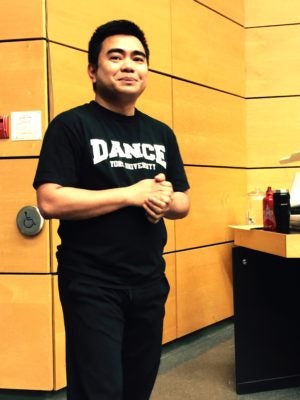 Dr. Patrick Alcedo is an expert on Philippine dances and festivals. MARISA ROQUE

Justin Poy, the Honorary Patron of Asian Heritage Month, sponsored the afternoon’s lecture.  An active member of Canada’s Chinese community, Poy is president and creative director of the Justin Poy Agency.  He has won numerous Canadian and international advertising creative awards over the past 22 years and is a frequent keynote speaker across Canada and the US.

Jocelyn Huang, community relations officer of the Toronto Catholic District School Board, moderated the session.  The event was sponsored by the Faculty of Liberal Arts and Professional Studies, Office of the Vice-President Research and Innovation, the Halton Pinoy Project, the TCDSB, and organized by the York Center for Asian Research.