UK rolls out changes to protect domestic workers from abuse

By: Melissa Legarda Alcantara - @inquirerdotnet
INQUIRER.net US Bureau / London Correspondent / 12:38 AM May 17, 2016 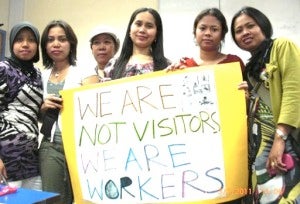 LONDON – Starting this month, UK Visa & Immigration (UKVI) will roll out the interview process for overseas domestic workers in private households who submit after-entry applications, to ensure that no employer abuse has taken place.

The changes in the rules came as a result of “The Independent Review of the Overseas Domestic Worker Visa,” written by James Ewins, who published his findings in December 2015.

In his review, Ewins found that “the existence of a tie to a specific employer and the absence of a universal right to change employer and apply for extensions of the visa are incompatible with the reasonable protection of overseas domestic workers while in the UK.”

Ewins argued for the right of overseas domestic workers to change their employer and to be able to extend their stay to work in the UK from 6 months for up to 2 ½ years.

The 2 ½ years period will mean overseas domestic workers having stability when brought to the UK, and the possibility of escaping abusive employers and finding alternative work in the UK in order to survive and continue to support their families back home.

Whether the UK government will introduce the recommended 2-1/2 years for overseas domestic workers, or come up with a viable alternative, remains to be seen.

Domestic workers include housekeepers, cleaners, chauffeurs, gardeners, cooks, nannies, personal carers for the employer or a member of the employer’s family, and those providing a personal service such as protecting the employers and members of their family.

They may be employed on a live-in or live-out basis.

Throughout the pilot duration of screenings, overseas domestic workers who submit applications in this category of stay will be called for interview, where their applications will be reviewed to see if relevant requirements of the Immigration Rules have been met.

This method of inspection will bring to light whether the worker’s terms of conditions of employment are being met according to the rules, and whether there is a possibility of abuse and therefore a need for protection.

The UKVI website states that caseworkers must continue to evaluate applications against the Immigration Rules and complete an Overseas Domestic Worker Indicator cover sheet in the “normal way.”

For decades now, domestic workers employed abroad were allowed to accompany their employer into the UK for the purpose of domestic work.

In the then Labour Party government introduced a concession to enable overseas domestic workers in private households to apply for extensions of stay in the UK and to change their employers.

Established domestic workers under these rules were able to accompany their employer to the UK and receive 6 months Entry Clearance, which they could extend for 12 months’ leave maximum at a time.

They were able to change employers in the UK, provided they remained a domestic worker and met other requirements, and became eligible to apply for indefinite leave to remain once their 5 years of continuous lawful residence were completed, and once they passed the (now required) English Language and Life in the UK tests.

This concession, however, was effectively ended by the coalition Conservative/Liberal Democrat Government in April 2012.

Since then, any new domestic workers after that date would get only a 6-month non-renewable visa in the UK.

There have been many documented cases of abuse of domestic workers by their employers particularly from certain countries.

Just this year, The Guardian newspaper published a shocking article regarding a Filipino woman who suffered physical abuse at the hands of wealthy Gulf employers in Notting Hill.

Ewins also advocated for punishment for their abusive sponsors, which is similar to employers being prosecuted in North America for maltreatment of their domestic workers.

Those who entered the UK as overseas domestic workers who are then found to be victims of human trafficking or slavery will be permitted to apply for an extension of stay on that basis.

The threshold for proving modern slavery and human trafficking is very high, including the necessity of producing possible witnesses, statements to police or to a doctor while the abuse was taking place.

The UKVI further offers guidance on taking legal action in regards to a circumstance where a person is admitted as an overseas domestic worker but is a potential victim of human trafficking or slavery.

What this means for ODWs

An estimated 10-17,000 domestic workers, mainly women, enter the UK every year. Many of these workers are from the Philippines.

Currently, domestic workers applying to enter the country are limited to a maximum of 6 months in the UK on what is essentially a Visitors’ Visa with work allowed for the specific employer who brought them in.

Those who entered before 6 April 2012 are able to extend their leave annually using Form FLR(O) for Leave to Remain.

After they have completed 5 years in the UK, they are then eligible for indefinite leave to remain (ILR), providing they meet the full requirements of the rules when they apply using Form SET(O) for Settlement/Indefinite Leave to Remain.

Those domestic workers who renew on an annual basis need to pay an annual renewal fee of £811, as well as an Immigration Health Surcharge of £200 a year to be able to access National Health Services – such as consulting a doctor.

This fee remains small in comparison with hospitalization fees. As such, the benefits brought to the worker are minimal, despite bringing in extra revenue for the government – @illumelation