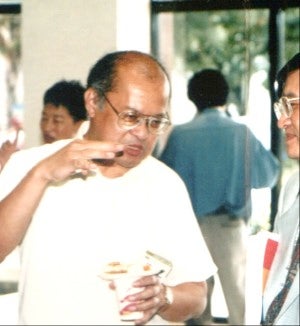 PORTSMOUTH, New Hampshire –E. San Juan, Jr., a prolific Filipino intellectual, has written close to 60 books on various topics, including race, social class, post-colonialism and the Filipino diaspora. In this interview with INQUIRER.net he shares his analysis of president-elect Rodrigo Duterte’s victory and what awaits the Philippines.

In 1999, San Juan was given the Centennial Award for Achievement in Literature from the Cultural Center of the Philippines for his contributions to Filipino and Filipino-American studies. His more recent books include U.S. Imperialism and Revolution in the Philippines (Palgrave), Racism and Cultural Studies (Duke University Press), and Between Empire and Insurgency (UP Press).

A lifetime academic, San Juan was formerly a fellow of the W. E. B. Du Bois Research Institute at Harvard University and an emeritus professor of English, Comparative Literature, and Ethnic Studies at Washington State University. He is currently a professorial lecturer at Polytechnic University of the Philippines.

Marvin Bionat (MB): What do you think were the key factors that made Duterte win?

MB: Why did people vote for him despite his extrajudicial approach to curbing crime and his open contempt for due process in Davao City?

ESJ: The feudal authoritarian mindset of most people prefers peace and security imposed from above, if they don’t threaten their private interests. If Davao suddenly became crime-free, well and good, since the victims are from the poor, lumpen classes who are not organized, or are manipulated by politicians and big-moneyed syndicates. But those are petty crimes, not the scandalous theft instanced by the Napoles disclosures, the Arroyo scams, etc.

Elements of the middle sectors admired the early result of Marcos’ martial law, so long as the victims were hidden. And commodities are accessible to most wage earners. The mass media, as well as religious institutions, sanction law and order as long as it’s good for business, market operations, consumerism, preservation of the status quo. Meanwhile, the big criminals in government and civil society are enjoying their holiday. And Davao is not exactly a microcosm of the whole neocolonial network of complex institutions and habitual practices. To be sure, Davao is not Metro Manila or even like Binay’s Makati.

MB: What does his emergence as the country’s leader tell us about our society?

ESJ: Well, it’s a manipulated neocolony where information, public discussion, open criticism, and formation of dissenting parties are tightly regulated and administered, so public consciousness or sensibility—bored by the usual bribery-cum-palabas—welcomes spectacles like Pacquiao, as they welcomed Estrada, etc.

Du30 was a new face on the electoral scene, dominated by trapos and has-beens, so the audience/public was attracted and excited, especially by someone with a foul mouth, mimicking the contrived TV/movie image of a daredevil gangbuster who somehow miraculously climbed up from the unwashed class and succeeded in acquiring the aura of a populist messiah of sorts. This is not a judgment on the person, but a comment on the ideological atmosphere of the last few months.

The Du30 phenomenon, like Erap’s popularity, will prove circumstantial, context-bound, and will go the way of previous presidencies, given the cast of genteel advisers, run-of-the-mill cabinet appointees, etc. Magsaysay was quite popular, but who in this generation of post-martial-law babies remember him now?

So it’s not the whole 100-plus million Filipinos who are responsible for Du30. It’s a socio-historical phenomenon brought about by diverse trends in society, symptomatic of legacies of colonialism, tributary habits, patriarchal sexist dispositions, image-saturated fantasies, etc. Du30 is like a basketball star or TV spectacle, cheered today, gone tomorrow.

MB: Some have pointed to a global trend that favors strong, nationalistic, fascistic leaders. Is Duterte’s victory part of that phenomenon?

ESJ: Whether Du30 is fascistic or nationalistic as president remains to be seen. It’s not a trend worldwide. Iceland, for example, threw out the corrupt elite. Then there’s Bolivia’s Evo Morales or Myanmar’s Lady Heroine. But the trend is more common in dependent or neocolonial formations (as in Latin America or Africa) where socio-economic pressures heighten class, ethnic, and religious divisions, so that the military or Bonapartist solution becomes an alternative.

Overall, global capitalism favors the theater of democratic procedures (parliaments, elections) and predictable laws, because they hide the violence of the truly unequal distribution of power and resources. Where the class war cannot be negotiated via dialogue in the public sphere and constitutional processes, force becomes a temporary way out, as in the U.S. war on terror in Afghanistan, Iraq, Libya, Haiti, etc. It can last long, but not forever. The people, not dictators, make history, as the saying goes.

MB: What scenarios (both positive and negative) do you see happening under a Duterte presidency?

If Du30 adopts the Davao style of prohibiting mass agitation (allowing torture, detention, and killing of opponents) and the economy worsens, mass anger and petty bourgeois desperation will drive many to the hills.

If Du30 steers a “middle course” (quite improbable in the midst of the global financial crisis, and tensions between China and the U.S.), more open in-fighting among the oligarchs will erupt into the open. Remember, Bongbong Marcos is deeply chagrined, and his camp will not sit quietly in the sidelines. He surely has a following in Ilocandia, both at home and abroad (among OFWs), so as long as the majority have not understood the cruelty of the Marcos dictatorship, and the oligarchic class-identity of the Marcos dynasty (majority have no memory or democratic-nationalist consciousness), Bongbong and his class will continue to exert influence, same as with the Cojuangco-Aquino and the landlord/comprador elite.

Factor in this brew the resurgence of Moro violence (the Abu Sayyaf may metamorphose into a populist Islamic/ISIS-type formation, as well as local dissidence in various provinces) and this will stir up the whole country into a situation favorable for revolutionary transformation, provided the progressive forces (and their intelligent collective spirits) are able to gain hegemony (moral and intellectual leadership) and win the support of the broad masses against the oligarchs, the military, police, and their main sponsor, the Washington-Pentagon bloc. This means that the national-democratic forces need to mobilize international support from more than 10 million Filipinos abroad, as well as kindred nationalities, in the diaspora.

Events—reality, in general—exceed the grasp of anyone’s intellect, so we need the whole community to reflect on the crucial questions that you raised and connect them to the feelings, needs, hopes, and demands of the masses as they organize, discuss, agitate, and solve daily problems, in light of the historical past and future of the whole Philippines. This long durable chronicle of resistance, not elections every six years, is what will decide the fate of the Du30 regime, as well as those to come.