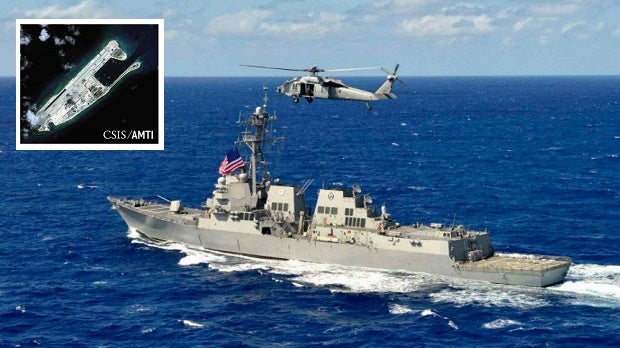 The USS William P. Lawrence (DDG 110), Arleigh Burke class guided missile destroyer of the US Navy, is shown on maneuvers in the Pacific Ocean. The warship irked Beijing recently when it sailed 12 nautical miles off Fiery Cross Reef (inset) to challenge restrictions by China on freedom of navigation in the South China Sea. China has built an island and a military-grade runway on the reef which is called Kagitingan by the Philippines. US NAVY PHOTO FROM USS WILLIAM P. LAWRENCE (DDG 110) FACEBOOK PAGE TAKEN BY MASS COMMUNICATION SPECIALIST 3RD CLASS CARLA OCAMPO / CSIS – AMTI

BEIJING, China — The US on Tuesday sailed a warship close to a disputed South China Sea reef Beijing has built up into an artificial island, officials said, prompting China to express “dissatisfaction and opposition”.

Guided-missile destroyer USS William P. Lawrence navigated within 12 nautical miles of the Fiery Cross Reef, occupied by China and also claimed by Vietnam, Taiwan and the Philippines, the Pentagon said.

“This operation challenged attempts by China, Taiwan, and Vietnam to restrict navigation rights around the features they claim,” Pentagon spokesman Commander Bill Urban said in a statement.

“Because the Philippines’ maritime claims in relation to South China Sea features do not purport to restrict the exercise of navigation rights and freedoms under the law of the sea by the United States and others, they were not challenged during this operation,” he added.

It is Washington’s third “freedom of navigation” operation in the disputed waters launched in recent months after China built several artificial islands as it asserts claims to nearly all the sea.

Chinese foreign ministry spokesman Lu Kang confirmed the operation on Tuesday, saying the warship “illegally entered waters near the relevant reefs of China’s Nansha islands without the permission of the Chinese government”.

Nansha is China’s name for the Spratly Islands, where Fiery Cross Reef lies.

“China hereby expresses dissatisfaction and opposition,” Lu said, adding: “I want to stress that the action taken by the US has threatened (the) security, interests and sovereignty of China.”

It landed an air force plane on the reef last month and last week sent military singer Song Zuying to serenade hundreds of troops and construction workers there.

China claims nearly all of the strategically vital sea, even waters close to Southeast Asian neighbours including Vietnam, the Philippines, Malaysia and Brunei who have competing claims.

Washington regularly accuses Beijing of militarizing the South China Sea, saying it has built runways and deployed missiles to islands there.

Beijing denies the accusations and says US patrols have ramped up tensions.

The sail-by comes ahead of a ruling by an international tribunal on a case brought by the Philippines over the issue.

“These excessive maritime claims are inconsistent with international law as reflected in the Law of the Sea Convention in that they purport to restrict the navigation rights that the United States and all states are entitled to exercise,” Urban said.