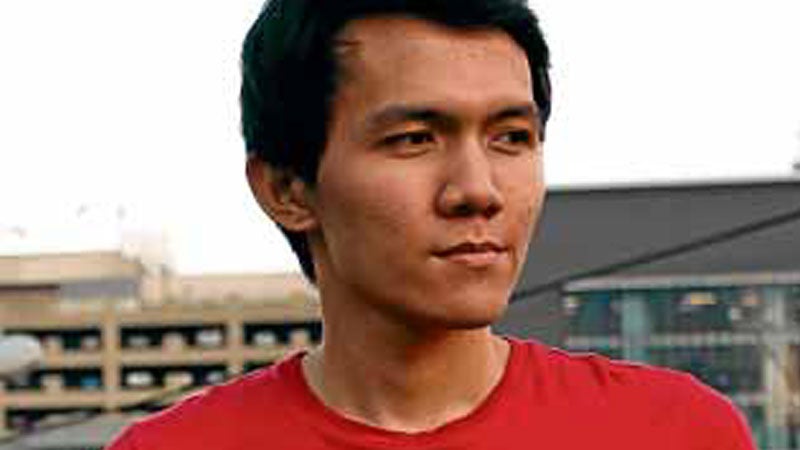 HE WON’TWORK ABROAD Despite being the only one left in the country in their small family, Jowen Avila refuses to follow in their footsteps and work abroad. JHESSETO. ENANO

(Fifth of a series)

Jowen Avila, 23, has always looked forward to this time of the year, when his parents would return home from abroad.

For his mother Annie, the event this time is special. She will vote for the first time in today’s elections.

Recent national statistics show that overseas Filipino workers (OFWs) numbered an estimated 4 million, anytime from April to September 2015. Saudi Arabia remains to be the top destination of OFWs for the given period, with one in every four Filipinos, or 24.7 percent, working there.

The situation has not changed despite job insecurity, harsh political, working and geographical conditions abroad, and most importantly, the sacrifice of separation from family.

All five presidential candidates—Jejomar Binay, Rodrigo Duterte, Grace Poe, Mar Roxas and Miriam Defensor Santiago—have vowed to strengthen the Philippine economy and provide more jobs so it would not be a necessity for Filipinos to leave.

They have also proposed improvements in legal assistance for the OFWs.

“Like other OFWs, my parents have gone abroad to seek greener pastures—to be able to provide their children a comfortable life,” Avila said.

His elder sister, Joanne, 25, also works as a nurse in Saudi Arabia. Nephews, nieces and cousins have sought better lives outside the Philippines.

His parents live and work in two different cities in Saudi Arabia. Annie had to return home to give birth to him in Surigao, without her husband who was still bound by his working contract.

Avila grew up with aunts, uncles and grandparents, only meeting his parents once a year every summer. He would look forward to the end of school because it would also mean his parents would be home.

But growing up without them also meant a different family structure. Avila and his sister, before she went abroad for better fortunes abroad, had been only family members left in the Philippines.

As a child, Avila looked forward to balikbayan boxes filled with toys and goodies. Communicating through Skype helped bridged the gap and somehow brought the family together.

“My parents and sister spent their first Christmas together last year in Saudi Arabia, but it was also the first Christmas that I spent here alone, because I chose to stay here,” Avila said.

He refused to follow in the footsteps of his parents, sister and relatives who are abroad. “I don’t want to feed the cycle they started,” he said.

A freshman law student at San Beda College, Avila said that being a lawyer in the Philippines is his best shot for a better future.

Before attending law school, Avila, a journalism graduate from University of Santo Tomas, didn’t have much luck in finding a job suitable to his degree. His first employment was at an outsourcing company in Makati City, but he didn’t pass the probation period.

His next job was at an online English tutoring firm in Quezon City. He stayed in the job for a year and three months. He said he wasn’t happy anymore.

“I applied for other jobs, but I didn’t hear anything from them. I thought of applying for call centers for easy money,” he said.

While seeking employment, Avila felt demoralized going through all the processes: applying for several, almost nonrelated jobs, knowing his employment would probably be terminated soon and finding a job fit for his degree.

“When I got home [from an interview], I talked with my mom via Skype and told her I don’t know, I don’t think I want [the job],” he said, referring to one of his many applications.

He said his father had suggested that he leave the country, too. But he refused, knowing that most employment opportunities abroad look for technical skill and hard labor. Writing is not one of them, he said.

Avila added that his parents had no plan to work abroad.

“They will retire soon. If I work there, I would have to stay there,” he said. “And if that’s the case, I don’t want for us to be separated again.”

Yet, no matter the type of work, there is no complete sense of security in a foreign land. Avila said that along with fellow nurses, his sister had been petitioning for their passports to be returned to them by their employer.

“It’s scary there, too. My sister tells of stories of Filipinos who just went out to buy something, then a random stranger would take them,” he said. “They really have to be alert… And even discreet in celebrations.”

To be called “modern heroes” as they search for job stability away from home is bittersweet for OFWs. They have continued to become a formidable economic force with remittances that amounted to $25.76 billion in 2015.

Yet out of 7,182 OFWs facing legal problems abroad, 79 of them are in death row, according to the Department of Foreign Affairs.

Jowen hopes that time will come when there will be no need for Filipinos to leave and work abroad. But he knows that as long as the economy and the working conditions in the Philippines would not improve, many Filipinos would still be forced to do so.

“The next President needs to go great lengths in ensuring job security, especially since this year is a transition stage in our economy,” he said. TVJ

Mass layoff due to energy crisis threatens OFWs in Saudi–Migrante