Philippine election could cause heartburn for its US ally | Global News

Philippine election could cause heartburn for its US ally 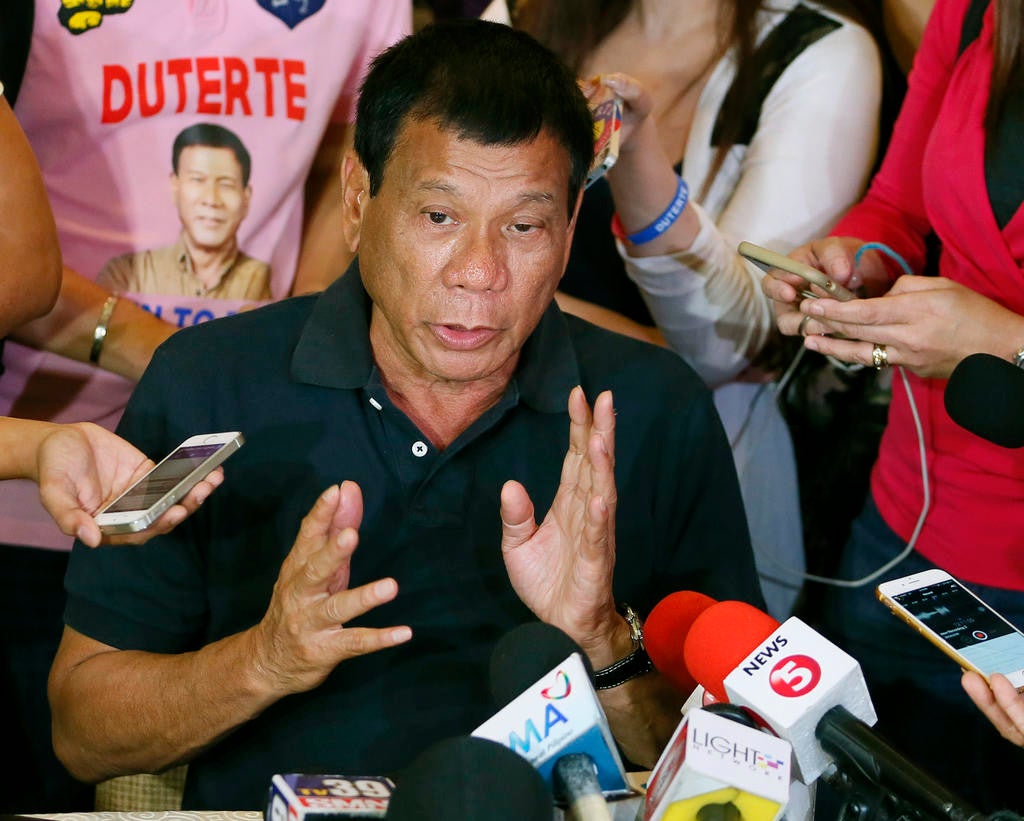 In this April 29, 2016, file photo, Presidential candidate Rodrigo Duterte answers questions from the media in Manila, Philippines. The upcoming Philippine presidential election could cause some heartburn in Washington. The winner of the vote on May 9 will be hand-maiden to the most crucial U.S. relationship in Southeast Asia, and front-runner Duterte has not inspired confidence with his casual threats to shoot criminals and by joking about the gang rape and killing of a foreign missionary. AP Photo

WASHINGTON— The upcoming Philippine presidential election could cause some heartburn in Washington. The winner of Monday’s vote will be hand-maiden to the most crucial US relationship in Southeast Asia, and the front-runner has not inspired confidence with his casual threats to shoot criminals and by joking about the gang rape and killing of a foreign missionary.

The historically tumultuous relationship between the US and its former colony has thrived in recent years as the Philippines has turned to Washington for support against an assertive China. But there’s uncertainty about how the eventual election winner will navigate external relations during a period of high tensions with Beijing.

Front-running candidate Rodrigo Duterte is known for his profanity-laden speeches and has been likened to Republican presidential candidate Donald Trump. He made international headlines last month when he said that an Australian missionary who was gang raped and killed during a 1989 prison siege was so beautiful that he “should have been the first” to assault her. The Australian and US ambassadors criticized that comment, and Duterte told them to shut up.

On Friday, incumbent President Benigno Aquino III, who cannot run for re-election, made a desperate call for the trailing candidates to ally against Duerte, whom he described as a threat to democracy. The veteran city mayor has earned the nickname “Duterte Harry,” after a Clint Eastwood character with little regard for rules. He faces allegations that death squads committed extra-judicial killings to clean up the southern city of Davao that he’s run for 22 years.

As with any foreign election, US officials are reluctant to comment in case they are accused of trying to influence the result. “We look forward to working with the next Philippine administration to build upon our strong and enduring relationship, whatever the outcome of elections may be,” said Katina Adams, a State Department spokeswoman for East Asia.

Still, they’ll be hoping for a successor who will follow the strategic path forged by Aquino, who has doubled down on ties with Washington in the face of China’s aggressive pursuit of territorial claims in the disputed South China Sea.

On Aquino’s watch, the Philippines has agreed to opening up several of its military facilities in American forces — a quarter-century after nationalist sentiments forced the closure of US bases in the island nation. That’s an important boost to President Barack Obama’s push to expand America’s presence in the Asia-Pacific to counter China.

“The Philippines has adopted an adversarial posture with regard to China that is unique in the region,” said Marvin Ott, a former US intelligence analyst and now a lecturer on Southeast Asian studies.

Aquino has been more circumspect with China than his predecessor, who was accused of cutting a corrupt deal with Beijing over joint exploitation of resources in the South China Sea. Aquino did reach out to Beijing after taking office in 2010, but relations tumbled after Chinese vessels occupied a shoal off the Philippine coast in 2012. Manila subsequently lodged a case with an international tribunal challenging the legal basis of Beijing’s claims to virtually all the South China Sea. A ruling is expected within weeks.

That’s an approach that’s been supported by the Obama administration, but which could sharpen tensions with China if the tribunal rules in Manila’s favor, as many expect.

The contender most likely to follow Aquino’s policies on the South China Sea is the one the president has endorsed: Mar Roxas, a US-educated investment banker who served in Aquino’s Cabinet. But all of the candidates, including Roxas, have signaled a willingness to improve relations with China, the region’s dominant economy.

Vikram Singh, a former senior US defense official, said it was possible that as president, any of the candidates could slow the recent agreements on increased US military access to Philippine bases, but he expected “they’ll want to keep close ties with Washington when they see just how significant the pressure can be from Beijing.”

Duerte’s position on the South China Sea has been characteristically unconventional. He has said he would initiate talks with the Chinese, and if those fail he’d go to one of the disputed Chinese-made islands by jet ski and plant a Philippine flag. He told a televised debate it would be up to the Chinese if they want to shoot him and make him a national hero.