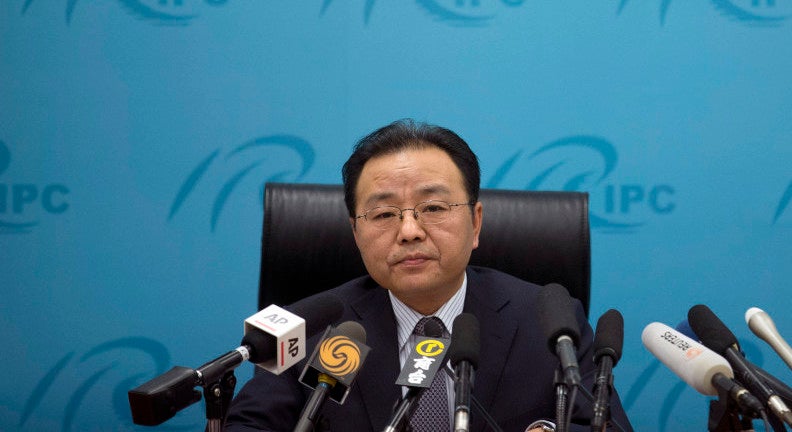 Ouyang Yujing, Director-General of the Department of Boundary and Ocean Affairs of China’s Ministry of Foreign Affairs, speaks during a press briefing about China’s South China Sea policies in Beijing, Friday, May 6, 2016. China is rallying Russia and other friendly states to back a push to exclude the U.S. and its allies from the festering South China Sea dispute, despite its insistence that countries without a direct territorial claim should remain firmly neutral. The words, above, mean “Chinese and foreign media briefing.” (AP Photo/Mark Schiefelbein)

BEIJING—China is seeing mixed results in its effort to enlist friendly states in its push to exclude the US and its allies from the festering South China Sea dispute, underscoring the limits of Chinese diplomacy despite its massive economic clout.

Beijing won a major endorsement for its position with remarks by Russian Foreign Minister Sergei Lavrov last month that players from outside the region should not get involved.

However, its recent announcement of added support from Brunei, Laos and Cambodia drew unusually strong criticism from senior Singaporean diplomat Ong Keng Yong, who said Beijing may be trying to split the Association of Southeast Asian Nations, the regional bloc to which all four nations belong. China’s announcement was even questioned by Cambodian government spokesperson Phay Siphan, who said no new agreement with China had been reached.

Despite the blow-back, China has noted recent statements that “show that the international community has come to understand and support the Chinese government’s position on handling the South China Sea issue and the arbitration case brought by the Philippine side,” Ouyang Yujing, the head of the foreign ministry’s Department of Boundary and Ocean Affairs, told reporters Friday.

Ouyang was referring to a case challenging China’s South China Sea territorial claims brought by fellow claimant the Philippines before the United Nations Court of Arbitration in 2013. China has refused to join in the legal process and says it won’t accept the court’s ruling, expected within weeks.

Beijing’s approach displays its craving for international respect and desire to avoid isolation over the issue, and provides “an iota of self-satisfaction,” said Yu Maochun, an expert on Chinese politics at the US Naval Academy.

Russia’s support is particularly significant, both for China and the world at large, because of the growing appearance of an anti-US and anti-Western united front, Yu said.

“This breeds a great potential danger of the world skidding to a formation of big power alliances of opposition, whereby China and Russia act together against a US-led coalition of democracies,” Yu said.

However, the fact China, with the world’s second largest economy, has gained the vocal support of only a handful of largely undemocratic, economically dependent states also shows the limits of its push for greater diplomatic influence, said Jonathan Holslag, a professor of international politics at the Free University of Brussels.

“Actually, it is striking how small the number Chinese supporters remains, given the enormous amounts of financial aid that China threw into the scale,” Holslag said. “It all shows the limits of China’s economic diplomacy.”

Although China has called repeatedly for outside states to stay neutral on the issue, it welcomes the expressions of support and sees no contradiction, said Li Guoqiang, a Chinese Academy of Social Sciences researcher and top government adviser on the South China Sea.

Russia and others are “expressing a political stance, they are not interfering in South China Sea matters. On the other hand, other countries are substantively taking a whole series of actions,” Li said at a Beijing forum on Tuesday.

The drive to enlist international backing comes as China faces growing scrutiny over its claim to virtually the entire South China Sea along with its reefs and islands.

The US has kept up steady pressure, sending ships and planes to emphasize its rejection of China’s assertion that the newly created islands it has built atop coral reefs are entitled to territorial waters and other legal rights.

Washington and its allies, including Japan, say the massive reclamation projects, complete with airstrips and military installations, raise tensions in a strategically vital waterway home to rich fishing grounds and a potential wealth of undersea gas and oil, and through which $5 trillion in global trade passes each year.

China has responded by accusing Washington of endangering peace and stability with its naval activities. On Friday, Beijing reaffirmed its sovereignty claim while issuing a new attack on the court case brought by Manila, calling it illegitimate and vowing never to “accept, participate in, or acknowledge” any subsequent rulings.

“The case brought by the Philippines is nothing but a political farce under the cloak of law,” the foreign ministry’s Ouyang, told reporters. “It is a grave threat to regional peace and stability.”

The region could grow more tense if China begins reclamation work, as some speculate it might, on Scarborough Shoal, an uninhabited coral reef near the main Philippine island of Luzon that Chinese government vessels seized in 2012 following a tense standoff with Filipino ships.

China’s defense ministry has not said whether such a plan exists, but has reiterated China’s ownership and right to develop the shoal however it sees fit.

Asked about future developments, Ouyang merely reiterated an earlier government statement that all reclamation work had concluded by the end of June last year.

“I believe you are very clear about the meaning of this remark,” he said without elaborating.

10 PhilHealth board members to face raps over irregularities — PACC