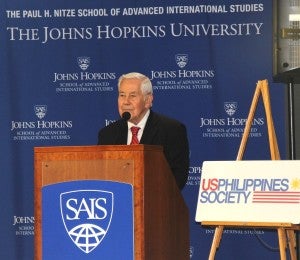 gave a personal perspective on the Philippines, including its 30-year transition since the EDSA Revolution of 1986, the gains under the Aquino Administration, along with what he believes lies ahead for the bilateral ties between the Philippines and the United States.

Speaking at the symposium entitled “Philippines 2016: Governance, Growth, Development and Security” in Washington, D.C. on April 28, Lugar recalled his role in leading the U.S. election observer delegation to Manila in 1986. He also disclosed the challenge of redefining U.S. policy towards former President Marcos in the lead up to the 1986 EDSA People Power Revolution.

He described as “far too simplistic” the idea at the time within the U.S. government that Philippine policy was only a choice between Marcos and the Communists who might take over.

“One of its many flaws was that it ignored the fundamental attachment of the Filipino people to democratic values.  We had seen that in the 1984 national assembly elections. I saw that as I toured the country on Election Day in 1986,” Lugar observed.

“I met many courageous people who had risked threats of violence and intimidation to come to the polls. And certainly the world saw it when TV cameras broadcast around the world the huge crowds, up to a million people, that attended Cory Aquino’s rallies after the balloting,” Lugar explained.

“Democracy prevailed over time. So the Filipino people should be proud that they have kept their democracy, even as they have worked to correct what they would agree are its many flaws,” he noted.

Lugar gives the current president high praise: “He leaves with some of the highest approval ratings for a departing president, and a solid record of robust economic growth under his watch. The American business community in the Philippines has given his administration high marks for the economic reforms that have been passed by the Congress during his term, and the international rating agencies have steadily upgraded the country’s credit scores. This growing international confidence bodes well for future foreign investment and more jobs.”

He was optimistic that the U.S. Philippines partnership will remain strong even after Presidents Aquino and Obama leave office. “While personalities are important, countries’ relationships with one another are also shaped by their interests, and those won’t change just because of the elections,” Lugar said.

He also expressed hope that the next American president will appoint experienced foreign policy advisers who will evaluate U.S.-Philippine relations on the basis of our shared interests, and not through an ideological lens.

Lugar also noted the 400,000 Filipinos who served with the American military in World War II, and the more than 3.5 million Filipino-Americans who live in the United States today, saying, “Simply put, Filipinos and Americans like each other.”

Ambassador (Ret.) John F. Maisto, President of the US-Philippines Society, remarked that while acknowledging some bumps in the road ahead, Lugar “delivered a fundamentally optimistic message that shared values will continue to underpin strong bilateral cooperation based on democracy, open trading systems, and a commitment to peace and stability in the Asia-Pacific region.”

The Philippines 2016 Symposium was co-sponsored by the Philippine Embassy and the US-Philippines Society, together with the Johns Hopkins School for Advanced International Studies.