Professor Ruth Wedgwood of Johns Hopkins University SAIS (left), Professor Patricio Abinales of the University of Hawaii at Manoa and Professor Zachary Abuza of the National War College are the speakers of the second panel on Peace and Security.

WASHINGTON, D.C. – Experts from government, the private sector and academe exchanged views on the challenges for the Philippines when a new administration takes over, at a symposium April 28.

During the first panel on Governance, Growth and Development, Motoo Konishi, former World Bank Country Director for the Philippines stressed the importance of addressing corruption and improving governance, protecting the population from climate change and environmental disasters and having peace in eliminating extreme poverty, noting that the Aquino administration has actively pursued these three objectives, according to Konishi.

“Fighting poverty and eliminating poverty means that you have to know each poor, who they are and where they live, and your investments need to be targeted to those people. Fast growth doesn’t eliminate poverty, you have to choose your policies carefully,” Konishi advised.

Matthew Bohn of the Millennium Challenge Corporation (left), Gloria Steele of the U.S. Agency for International Development (USAID) and Motoo Konishi of the World Bank are the speakers of the first panel on Governance, Growth and Development.

“The Aquino Administration focused on pro-poor policies,” Konishi further added, stating that the Philippine experience will be a highlight of the World Bank’s flagship World Development Report this year.

“The Filipino people are looking forward to more changes and to the continuation of reforms that the Aquino Administration started,” USAID’s Gloria Steele stressed, highlighting the accomplishments in competitiveness, transparency, corruption, tourism, infrastructure, education and health.

“Growth needs to be geographically dispersed throughout the country,” Steele noted on what more needs to be done, citing improvements in airport infrastructure and quality energy regulations as the two components of growth that the next administration can improve and focus on.

Matthew Bohn of the Millennium Challenge Corporation lauded the first compact with the Philippines, which supported poverty reduction, inclusive growth, and elimination of corruption, as being one of MCC’s best compacts.

He also expressed confidence that despite the challenges ahead, the Philippines will be able to sustain its growth and development largely because of the groundwork that has been set in place. “The Aquino Administration has successfully put down deep and important roots for creating the conditions for (sustained) economic growth,” Bohn said.

The second panel discussion on Security and Peace focused mainly on internal and external security challenges.

Professor Zachary Abuza of the National War College said that some of the administration’s achievements were the modernization of the Philippine air force, military and marine forces, the deepening defense relations with the United States through the Enhanced Defense Cooperation Agreement (EDCA), and Balikatan exercises.

However, peace and security challenges remain in Mindanao, one of which is the coercive capacities of political dynasties and political families through the use of private armies.

“For any lasting peace to happen in Mindanao, you have to eliminate the private armies,” Professor Patricio Abinales of the University of Hawaii at Manoa said. 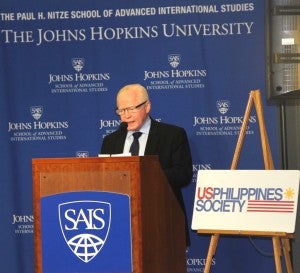 As for the impending decision of the Arbitral Tribunal, Wedgwood stated that “China will be put in a very difficult position to defy it” considering the interest of ASEAN member countries in the case.

Philippine Ambassador to the United States Jose L. Cuisia described the Philippines’ path towards good governance, growth, and development as challenging, but he credited the country’s economic transformation to the “good governance program” of the Aquino Administration and economic policies centered on inclusive growth.

Cuisia also cited the deepening Philippines-US relations as critical to the stability of South East Asia.